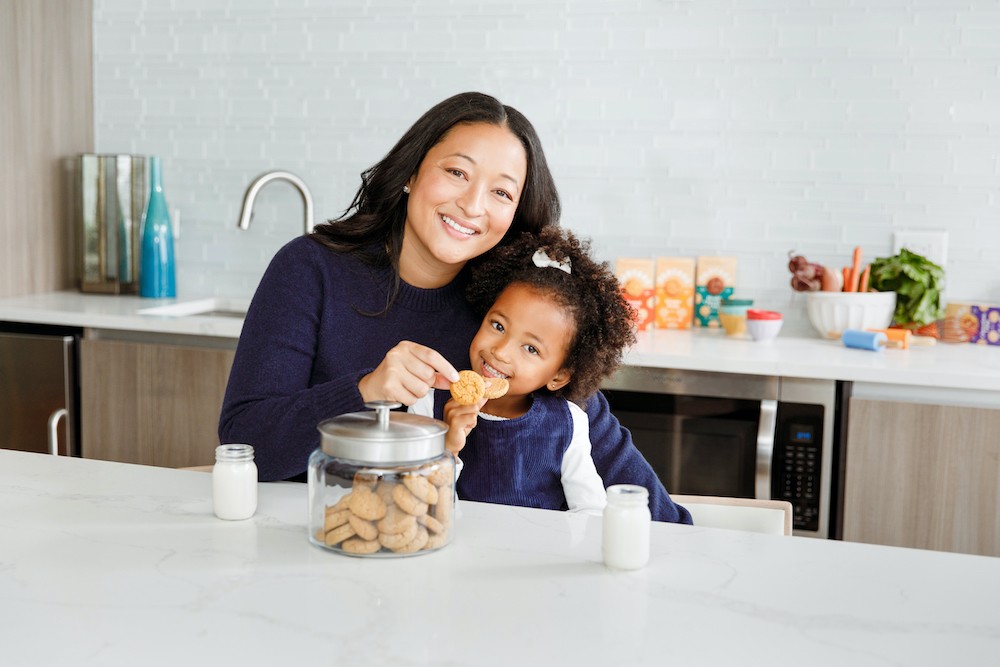 Partake Foods’ Denise Woodard only woman of color to raise $1M for a food start-up.

Necessity is the mother of invention, so goes the proverb. For Denise Woodard, that necessity was her daughter Vivienne’s food allergies, which resulted in the creation of her allergy-friendly cookie business, Partake Foods, in 2016. The New Jersey-based company has recently received a renewed bout of interest, thanks in large to its product offerings now available at national chain stores.  Woodard’s creations also garnered attention from none other than media mogul Jay-Z’s venture capital fund Marcy Venture Partners, securing a million-dollar infusion that is helping the company scale, just as she envisioned.

Not finding choices in the market that tasted good or felt nutritionally sound for her daughter to consume, Woodard took it upon herself to get into the kitchen and concoct what she had in mind. “I had an idea of flavors and nutritional profile, but I failed horribly at actually trying to make it taste good,” she shares. Thankfully, she found a food scientist who could bring that vision alive. “I knew though if I did this, I wanted it to be scalable, so we needed to find a manufacturer that can make products that were allergy-friendly, in an allergy-friendly environment.”

While Woodard did find the company, it didn’t typically work with start-ups, and so began the process of courting and business plan sharing to get the company on board. Since the manufacturer didn’t have many different equipment options, she had to choose from cookies or baking mixes. Wanting a ready-made product that didn’t demand time to be made from scratch every day, she went with cookies. Ingredients are all sourced from different countries and with sustainability and food allergies in mind, Woodard works primarily with single-source suppliers. Products are manufactured in Idaho in a top-eight allergen-free facility: no wheat, tree nuts, peanuts, milk, eggs, soy, fish and shellfish.

Partake currently offers eight cookie flavors – five crunchy and three soft-baked. The cookies are free of the top eight allergens, are gluten-free, vegan and made with simple ingredients “that you could find in your own kitchen,” Woodard says. With a countrywide presence now in about 2700 stores, including Target, Wegmans, Whole Foods and Sprouts, she is exploring international opportunities too. Luckily, the coronavirus pandemic didn’t affect the business much. “There was a lot of pantry loading and people who have food allergies or who are vegan or gluten-free really went to stock up it appeared, so our sales were doing well,” she says.

Rising to the Top

Short as its ascent may seem, Partake’s success was no overnight miracle. Funding was a challenge for the business, with initial monies coming from Woodard and her husband and a friends and family fundraiser. Early days saw her head to natural grocery stores in the area to sell out of her car. Small checks of a few thousand dollars at a time helped keep the lights on in the business. “Then we brought on one region of Whole Foods and we brought on Wegmans and things were starting to get more expensive … I ended up emptying my 401(k) and selling my engagement ring,” she shares. Her commitment to her business paid big dividends. Summer 2019 saw Partake close a million-dollar investment round that was led by Marcy Venture Partners.

Prior to Partake, Woodard worked in corporate America at recognized names such as Phillip Morris, then FedEx and finally Coca-Cola. Some of her experience from that time has translated well to her life now as an entrepreneur. “There was a lot of codeswitching and people not being able to bring their real self to work, so I knew that I didn't want that at my company. But in terms of processes and putting systems in place, I made sure our accounting was tight, legal documents and trademarks were put together for the point that we did start to grow and take outside capital.”

Woodard’s move from a “secure” job to entrepreneur mode didn’t find favor with her parents. Her father, who is is Black, earned his GED when in the Army and eventually went on to have his own trucking business. Her mother is Korean and had to drop out of school because of the Korean War. “Education and hard work were so important to them that for me to leave my job…to say they were not excited would be an understatement,” she says. But did her mixed heritage affect her own experience as an entrepreneur? “I think as much as it probably did make something hard, I try not to think about that. The places where it's really helped were some so many large retailers have diversity initiatives and supplier diversity teams. One of our biggest advocates at Target is their supplier diversity team and they helped us navigate the Target system. Similarly, with other large retailers.”

“When I think about what I want Partake to be, I think about a brand like Annie's Organic where you're walking down nearly every aisle of the grocery store and they have a product,” says Woodard of her future plans. “My goal is to be a platform brand that makes multiple types of product. This year we're just focused on cookies, but I would say in 2021 definitely look for us to have some new products that we’ll bring in the market.”

Of course, her daughter always gets a say in the products. “If it doesn’t have her taste test and I don't feel comfortable giving it to her, it's not something we're going to make,” says Woodard. While both of them love the triple chocolate flavor, the overall bestselling flavor at Partake is the birthday cake.

Moving forward, Woodard knows her path. “I believed from day one that Partake was going to be a success. I believed in using core values of doing what you say you're going to do, treating people well and being equitable and bringing accessible products to market … none of that has changed. I just feel more passionate about it than I did before.”