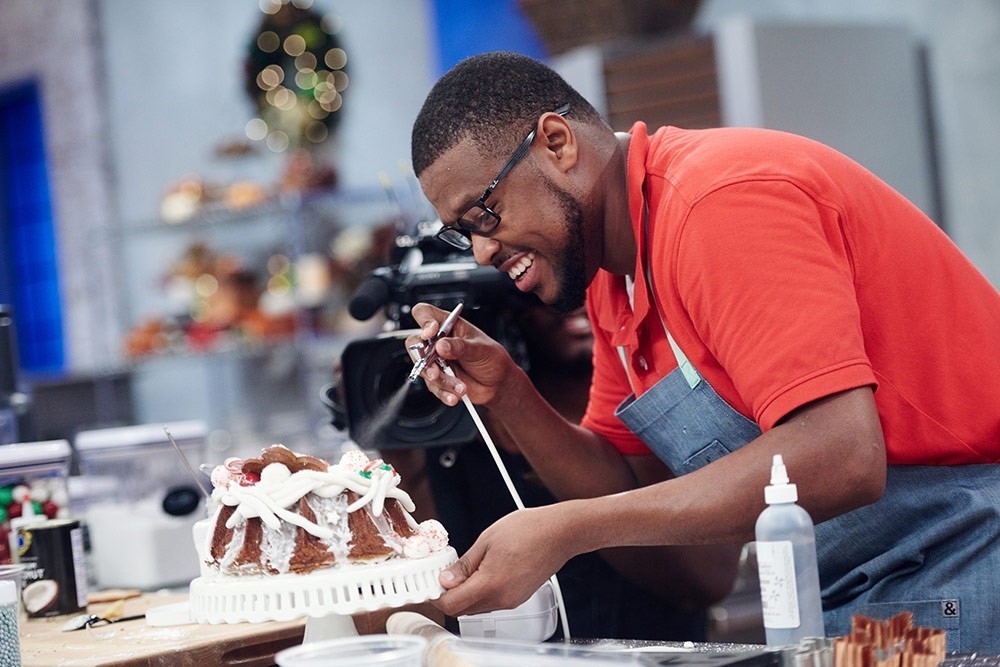 With $50,000 on the line, flour is sure to fly in the air as mixers and spatulas come out for what is sure to be another exciting season on the Food Network’s “Holiday Baking Championship” set to debut on Sunday, November 6 at 9 pm EST/PST. Fans of the network and show will watch as nine talented bakers from around the country vie for the grand prize and title during the seven-week competition.

Airing over the Thanksgiving and Christmas holidays, the show returns with a lot of spice as well as a little naughty and nice. The season’s opening episode doesn’t waste any time putting the contestants to the test as they turn seasonal beverages such as apple cider and hot chocolate into custom-made confections. From there, the fun continues each week with one baker crumbling before being sent home.

Alabama native Amber Croom and Shawne Bryan who hails from Anguilla are two bakers brave enough to take on the heat. Both are accomplished pastry chefs who decided to take a detour in their careers to pursue a sweeter path that allows them to express their creativity more freely.

With an eye on the prize, Bryan put down his pencil and drafting pad as an inspiring architect to pursue a career as a chef, first on the savory side before crossing over to pastry. The Caribbean native received his bachelor’s degree from Johnson & Wales University in baking and pastry arts. He worked in Miami as the executive pastry chef at the high-end restaurant Komodo. Prior to his stint there, Bryan was the head pastry chef at the exclusive Japanese restaurant Zuma Miami. Most recently, he relocated to The Bahamas to open the pastry shop, Bisou Bisous (‘Kiss, Kiss’ in French), later this month.

Tempering chocolate and stirring cake batter eventually won the heart of Croom who studied at the University of New Orleans to be a naval architect and marine engineer.  Seeing the aftermath of Hurricane Katrina in 2005, Croom decided that life was too short not to do what you are truly passionate about.  So instead of continuing her program in Michigan, she opted to return home to Birmingham and enroll in the pastry program at Culinard. After graduating, she traveled the world for two years on a cruise ship, crossing off every destination on her dream board. An experience that she says changed her life.

This past spring while working at Rimini Gelato in Vail, Co., Croom caught the attention of the show’s casting team who contacted her to audition. Seizing the opportunity, she made it happen in the nick of time as auditions were pretty much wrapped up. Fast forward and millions will tune in to see if she has what it takes to become the network’s next holiday baking champion.

Crazy in Love with Baking

“It’s chaotic, madness and crazy. You’re on your feet and in a kitchen where you don’t know where things are.  They constantly throw things at you and you are trying to get your ground.  It is a great experience in that it really shows you what you are really capable of, “says Croom. Bryan pretty much mirrored the sentiments with both saying they would most likely do it again but not without a little hesitation. Given the rollercoaster ride they just got off of, one needs a little calmness before getting back on for round 2.

“I like to be challenged.  I don’t like to be comfortable in what I am doing so I really enjoyed the challenges and pushing the envelope, quick thinking and execution. It is something I like to push with my team,” says Bryan.

There is sure to be a lot of pushing and stretching of one’s imagination as the contestants take their tasty creations in front of judges Duff Goldman, Nancy Fuller and Lorraine Pascale. Hosted by Bobby Deen, the competition’s intensity and excitement are sure to transfer into the homes of viewers.

You’ll have to catch all seven weeks to see whether Croom or Bryan bake their way to the title at the end. With a little glimpse of what we can expect, Croom says, “This season was really fun and had to do with the contestants. I think everyone’s personality really shined through. I think it is going to be amazing to watch what goes on in that kitchen.”

For more about the show and the upcoming season, visit http://www.foodnetwork.com/shows/holiday-baking-championship.html.