Preston Clark: A Rising Tribute to a Father's Legacy 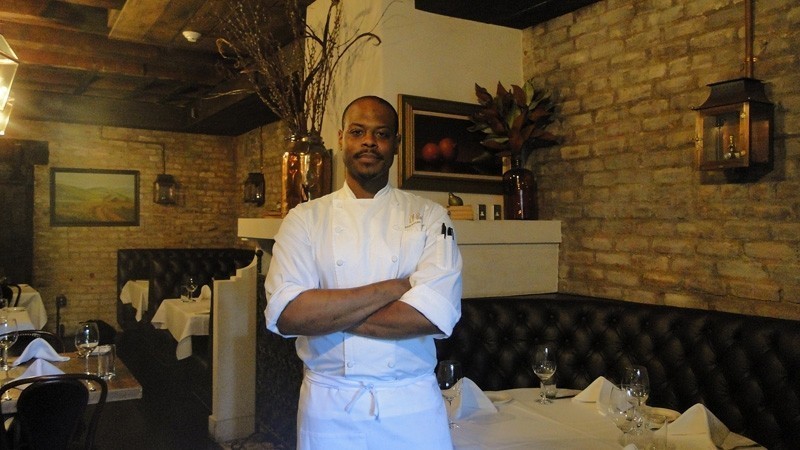 At just 30 years old, chef Preston Clark has worked in the kitchen with some of the culinary industry’s biggest names; Charlie Trotter in Chicago, Jean Georges Vongerichten in New York and now Tyler Florence in California.  As the executive chef of Florence’s El Paseo restaurant in Mill Valley, Clark seems right at home doing what he loves to do best, cook.

Before relocating to the Golden State in 2011, Clark was no stranger having lived in Los Angeles as a child when his father, the late great chef Patrick Clark, was the executive chef at Bice in Beverly Hills for two years.  For the younger Clark, it was seeing his father cook and being there alongside with him that ultimately rendered the decision that being a chef was what he wanted to be. “It was the rush of setting things out,” Clark says that made things exciting and kept the adrenaline rush going and desire to keep performing.

Like most chefs in the making, as a child Clark started off peeling the potatoes and just helping his father whenever he was cooking.  His father spoiled the family just as much at home as he did with his epicurean fans.  “It was almost like Thanksgiving every Sunday.  He would use every pot in the house,” Clark recalls.

Clark started going to work with his father who left an everlasting impression with anyone who came in contact with him and his food.  It was the move back to the east coast and working with his father at the historic Tavern on the Green in New York that harvested the seeds that were planted over the years to look at cooking and being a chef as a career choice.

With the death of his father in 1998 at the age of 42 from cardiac arrest, Clark went into the industry full speed ahead taking personal and professional lessons, tips and advice to heart and has since built an impressive career.  “What I take away most from my father is my work ethic.”

It was a friend from the CIA that would introduce Clark to Florence and his restaurant in a quaint city 14 miles from San Francisco. Florence was looking for an executive chef and Clark was open to starting a new chapter in his culinary career.  Things worked out and as of February of last year, Clark started calling Mill Valley home.

Cutting His Culinary Chops in California

El Paseo is a charming California chophouse set in the past and reminiscent of the 1950s.  The ambiance is rustic yet artistic and once you enter, you can feel the history and story behind the building that is dedicated to El Paseo’s original creator, Edna Foster.

Working side by side with Florence, Clark thrives for satisfying the palates of guests for dinner every night from 5:30 – 10:00 pm.  His main goal in his role is to keep it creative and most importantly fresh. Their collaboration continues to be a learning experience as well as a way to stay true to his roots when it comes to cooking.

A husband and a new father, Clark often works long hours and weeks having to find that balance that many chefs work to master over time. “I love what I do and enjoy cooking every day,” he says and when a chef makes that kind of statement, one wouldn’t think of coming between him and the kitchen.  But like most chefs with great mentors, that balance for Clark may come sooner than later as he finds that time outside of the kitchen can be just as inspiring as the time spent in it, and as inspiring as the time he spent with his dad.