The New Patty Party in Town: Chef Rashida Holmes Rolls Out the Roti in Los Angeles 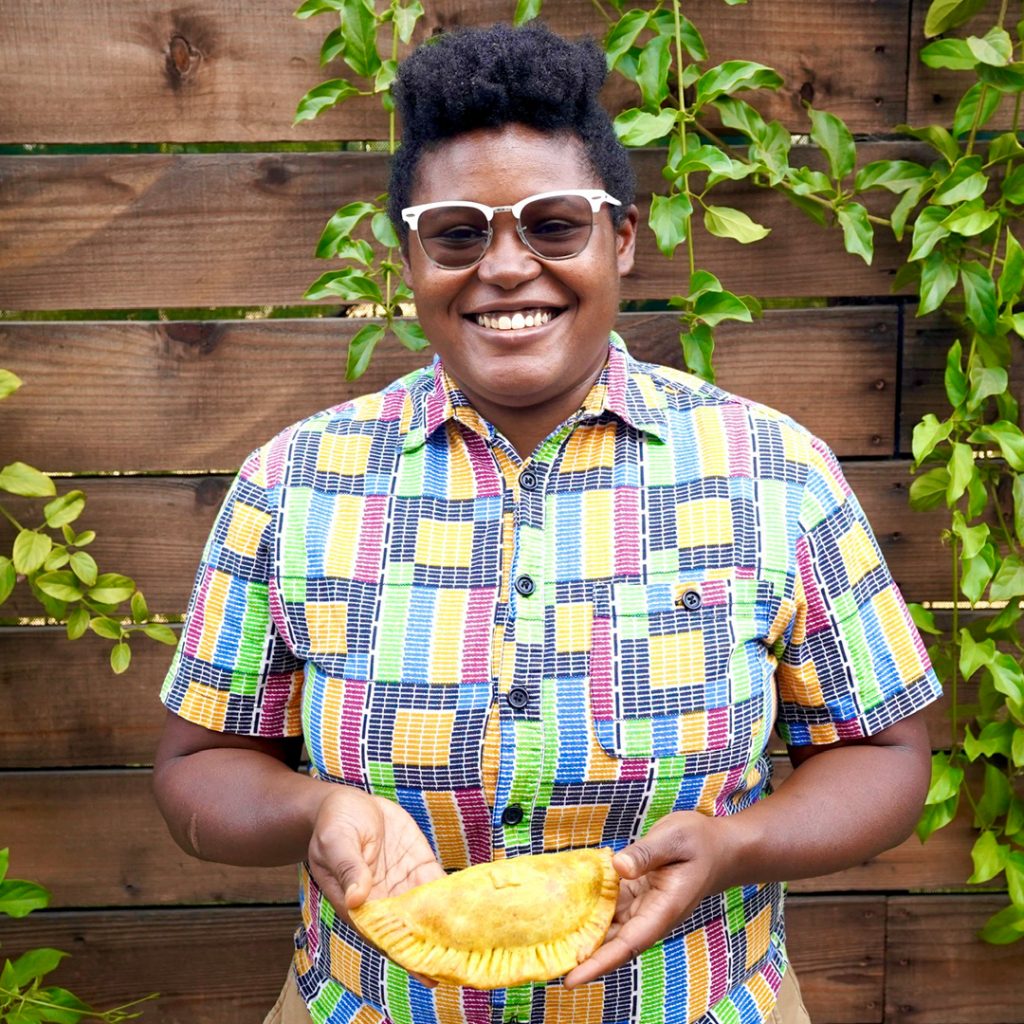 Finding a spot that makes good roti is a tough find, even in a foodie paradise such as Los Angeles, California. Finding one that knocks your socks off is a whole other level of elation. Enter Bridgetown Roti, chef Rashida Holmes’ love letter to West Indian street food, where you can have your fill of hand-rolled rotis, patties and even codfish cakes, accompanied by the boundless Caribbean charm she exudes.

Operating from a commercial kitchen space in downtown L.A., Holmes has managed to garner much attention from clients and the media during a time when other hospitality industry businesses were shuttering. She launched her venture in April, right as the pandemic gathered strength.

“It’s sad to see many of my favorite places closed with no sign of being able to come back. I went through a point where I was feeling guilty for being able to start and thrive at business, but then it’s come from time and energy,” she shares. “I do feel for the people who are struggling, mostly mom-and-pop shops, the ones in strip malls that just can’t survive. I hope we can help people get their business going.”

For Holmes, the pop-up route worked best when she finally took Bridgetown Roti full-time in April 2020 after a sprint at several area restaurants. Born in New York, she completed culinary school at Baltimore International College and lived in Philadelphia and Pittsburg for a while before arriving in Los Angeles in 2013.

When COVID-19 hit, she was just trying to launch and had to pull the brakes on her plans abruptly. Seeing a friend sell food from her home gave Holmes the impetus to do the same. That lasted until July when she grew out of not just her expanded home kitchen but also the space she was borrowing.

On to a shared commercial space it was at Crafted Kitchen, where she now offers food delivery and curbside pick-up on the weekends. Her team consists of her chef de cuisine Ana and dough master Rosa. Her mother is her business partner, and her father the unofficial taste tester – both hail from Barbados. Another business partner, Malik Smith, who is Trinidadian, and handles sales and marketing and social media.

Along the way, a $25,000 grant award courtesy of Discover’s Eat it Forward Program afforded Holmes an upgrade to a private kitchen space – Black-owned businesses across the country received a total of $3 million in grants as part of that program.

From her new kitchen, Holmes offers oxtail patties, vegan mango and sweet potato patties, garlic Trini eggplant and the classic mom’s curry chicken roti. “Growing up, that was comfort food. We would have curry chicken on the holidays, codfish cakes at every party. We would eat fish every Friday like escovitch that my mom would fry,” she recalls.

When she started cooking about a decade ago, she didn’t see any of that food at the restaurants she worked. She quickly realized nobody was making the dishes she’d like to eat daily.

While L.A. has many Jamaican and Caribbean offerings, it wasn’t the West Indian, Bajan, Trinidadian flavors she loved. From that transpired Bridgetown Roti – named after the capital of Barbados and a nod to where she’s from. The recipes are a combination of her own creations and some family contributions. Holmes doesn’t so much do traditional Bajan food as she does take flavors and ideas from the cuisine and playing with them – that’s how most menu items are created.

Ingredients are sourced primarily from local farms and farmers markets, but some elusive items such as scotch bonnet peppers and ackee are purchased from the American e-commerce website Etsy.

“What’s nice about California is you can get so much good fresh produce, like some of the tropical ingredients that I wouldn’t be able to get anywhere else. There should be more Caribbean restaurants here because it’s one of the few places that you can get that produce like fresh passion fruit, good mangoes that you can get in the Caribbean,” she says.

Holmes admits the response overall to her culinary adventure has been overwhelming. Recent coverage has included The New York Times, Los Angeles Times and The Hollywood Reporter, among others. “I’m deeply humbled by people’s interest in what I am doing. I’m just glad people like the food,” she shares.

Wanting to do things differently from what she has experienced in restaurants, she says, “I want everyone on the team to feel that they have agency in what we are doing.  That they are a part of the process, the story, and we are always focusing on quality and having balance.”

She shares the restaurant industry is working on a broken model that needs fixing. “I don’t know what the answer is yet, but I feel as a community this crisis (pandemic) has allowed us to take a look at the industry to see how we can make this better for the customers and employees.  I’ve always found the hospitality industry to be pretty collaborative in nature. People are never afraid to share ideas, time, space or other resources they have.”

Holmes also does her best to address food wastage, a big problem in the restaurant industry. Young coconut pulp is used to make coconut chutney and the water to cook rice. Mango chutney includes the whole skin of the mango and carrots and ginger are never peeled. “It’s hard.  You have to pay attention to it and make little adjustments, but if everyone pays attention to it more, then we can make a collective change.”

Meanwhile, with plans for the future still in the works given the changing scenario of the global pandemic, there is one thing Holmes is certain about. “I would love to share Bridgetown Roti with as many people as I possibly can while still maintaining the quality and the homeliness that people seem to like. It’s comfort food. It’s got to stay comfortable.”

Visit Bridgetown Roti at 672 South Santa Fe Avenue for takeout and pick-up or on www.bridgetownroti.com, and follow on Instagram for the latest menu updates.