Red Bay Coffee Brings Power Back to the People 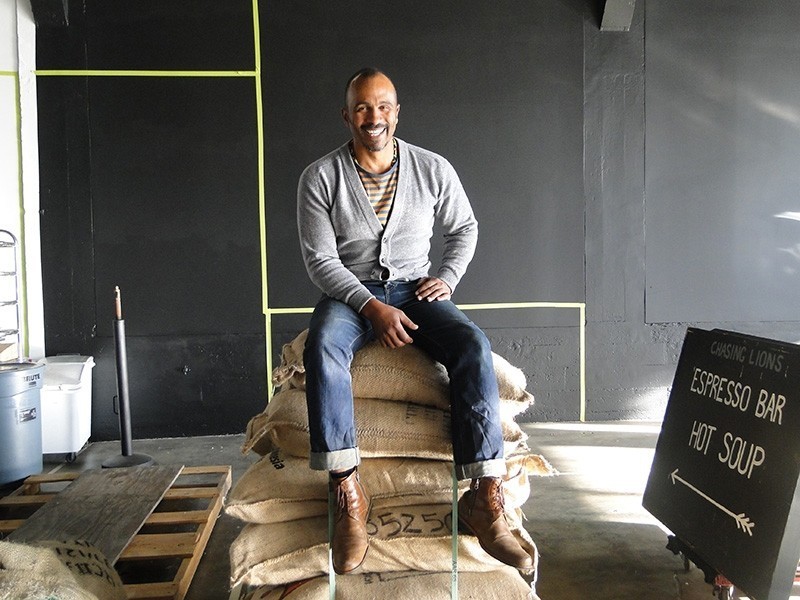 Coffee to Keba Konte is more than a carefully brewed drink with notes and aromas.  It is a vehicle for economic change. The San Francisco native founded Red Bay Coffee in 2014 in Oakland after years of perfecting his barista skills that he first started to hone in on while running his first eatery, the Guerilla Café, in North Berkeley.

Known international for his work as a visual artist, Konte is no stranger to using artistic platforms to raise consciousness about community and political issues. With Red Bay Coffee, the vision is to inspire the next generation of coffee brewers and baristas by creating a business model that allows all employees to share the profits as well as decide how to invest in the growth of the business.  “We will be creating jobs with dignity and great coffee,” says Konte.  In addition, Red Bay Coffee is about changing the face of the coffee industry through its level of inclusion and diversity that you won’t see in most coffee shops.

Coffee as Another From of Art

His entry into the coffee world was not intentional or planned.  A graduate of San Francisco State University, he studied photojournalism and later set off globetrotting around the world documenting such events as the election of Nelson Mandela in South Africa.  Stops along the way throughout Europe, Cuba, and Japan would develop another cultural lens that later would be expressed through his artwork seen at the California African American Museum, the Smithsonian Institute in D.C. and the Retina Galerie in Amsterdam as well as back home in the Bay Area.

With the initial goal of having a place to showcase his work, he co-founded the Guerilla Café that was known for its cool Afro-centric vibe and Guerilla waffles.  “I had one or two exhibits, but I got really fascinated with these waffles and the coffee. I had this audience and they loved the waffles and I was like well what do I do next so I kind of tweaked the recipe playing with the flours, playing with the fruits, playing with the seasonal stuff.  We were kiddie corner to Chez Panisse so of course, you are learning about seasonality,” says Konte.

A trusted friend turned him on to Blue Bottle Coffee, an industry innovator, and after a persistent pursuit, Guerilla Café would be the first to carry the brand.  Soon a skilled barista, Konte started training others while developing a bigger interest in coffee which led to learning more about production from seed to cup.  He began watching YouTube videos and would also spend time with an Ethiopian restaurateur named Mimi as she made coffee in the back of her restaurant.  He would later set up a coffee lab in his garage with a small roaster and started creating roasting recipes that varied by the amount of heat, length of time and amount of air.  The three variables together produce the profiles of the coffee beans that create a great cup of coffee.  An intensive coffee boot camp would be one of the last stops on his journey of mastering coffee roasting.

Deep into the world of coffee, Konte had an opportunity to open a second eatery at City College in San Francisco which he named Chasing Lions Café in 2012.  This location would be one of the first to test what would be later be known as Red Bay Coffee two years later.

Bringing Beautiful Coffee to the People

Now officially launched, Konte’s mission with Red Bay Coffee is to bring “beautiful coffee to the people” as the motto notes under the logo which includes selections such as Umoja (Africa), Pretty Penny (Central America), Ocho Libre (Decaf) and King’s Prize (Africa). The coffee with a purpose can be found in the offices of Bay Area companies such as Uber and Twitter as well as at local restaurants and cafes.

Last year, Konte and the team moved into a warehouse that will be built out to not only be the company’s headquarters but a social spot where one can stop by for a meticulous cup of coffee while enjoying a cool atmosphere vibe. Transparency will be key as you watch the roasters in action as well as those checking for quality.   In addition, Konte envisions the location to be an international training ground for future roasters from all over the world.

With creativity always at the forefront, Konte says they are working on some new products to extend the brand that include a coffee soda and kombucha.

For more information about Red Bay Coffee, jobs and to purchase, visit www.redbaycoffee.com.   To inquire about carrying the brand in your establishment or workplace, visit the contact us page.