Skyler Mapes of EXAU Brings an 80-year-old Olive Oil Tradition to the U.S. 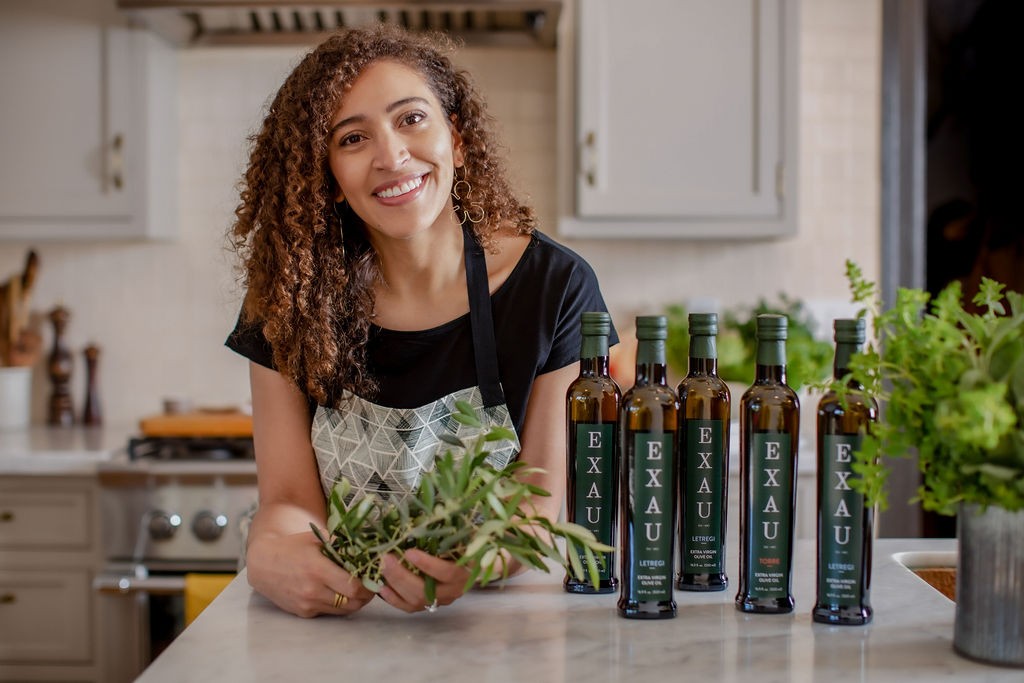 As a child, Skyler Mapes had no doubts about her career path. It was neatly laid out for her in a buttoned-up plan: she would go to architecture school, work on high-end custom homes and single-family builds while trailblazing the industry and eventually go on to work for her family’s development firm.

But while interning in the architecture industry, Mapes, a Northern California native, got a taste of what a career in the field would actually look like. It wasn’t partnering closely with clients and digging into design, as she dreamed about. Instead, it was working with large, mostly male teams and making insignificant tweaks to lengthy projects that she’d likely never lay eyes on.

“I thought, ‘I’m way too young and have way too much energy to be putting it into something that I don’t like. If I’m going to explore something that’s only going to make me happy, I should be doing that now. I’ll hopefully figure out how to make money doing it.” Mapes says.

From that point on, she was on an intentional mission to figure out what else was out there for her.

In 2014, Mapes was interning at a Barcelona architecture firm when she traveled to Rome for the weekend with some friends. During a chance encounter, she met now-husband Giuseppe Morisani and the two stayed in touch. Morisani promised to visit Mapes in Barcelona under one condition: she had to fly to Rome and drive seven hours south to visit his family in La Castella, Italy, which is located in the region of Calabria, the “toe” of Italy’s boot shape and the country’s sunny southwestern region.

Although skeptical, she agreed to the once-in-a-lifetime opportunity. The trip was a success, and Mapes loved the salty sea air and the food — octopus, mussels, clams, pasta with any of the aforementioned seafood, a variety of peppers — as well as the temperature and the warmth of the regional inhabitants. She also liked Morisani. As the two grew closer, Morisani threw out a wild idea to start producing olive oil together with his family’s olive trees. The couple was living together in the United States and was routinely disappointed by the olive oils in big grocery stores. They were certain that if given the opportunity, they could produce a better product. While agriculture wasn’t completely foreign to Mapes, she decided that she’d need to learn more if this was indeed her calling.

So she helped out at a vineyard harvest at Rock Wall Winery to test the waters where she spent her time picking grapes, working in the cellar and lugging around bins.

“It was very labor-intensive and we worked with a team of people every single day. I like to compare it to an orchestra because everyone knows their part. You pick up the rhythm and it was just such a strong sense of camaraderie that I had never felt before,” she says.

The Art of Agriculture

In the fall of  2017, Mapes and Morisani embarked upon their first harvest as the brand EXAU. With a team of four others, they carefully made their way through the olive trees, laying down nets to catch the olives and pulling up the net once they were ready to move to a new section of trees. EXAU’s olive trees are a blend of tradition and modern know-how. Some were planted 80 years ago by Morisani’s grandfather, others were planted 30 years ago by Morisani’s father and the rest are 2-year-old plantings by Mapes and Morisani. Calabria, which produces nearly one-third of Italy’s olive oil, is steeped in a vast culture of the product and the fact that Mapes and Morisani have the full historical background for each of their trees is just one of the reasons they’re able to stand behind their product.

If Mapes had her way, farmers would earn more respect.  “In the hierarchy of society, we have the farmers at the bottom and the CEOs at the top.  But farmers deal with conditions that we can’t control.  Mother Nature could throw a tsunami at you and then what are you going to do? It’s a combination of science and art and connecting with the soil. It’s a spiritual connection, so it’s so much deeper and even if you’re a farmer without any formal education, you have to learn the patterns of things.”

Unlike a grape harvest, Mapes and Morisani harvest their olives over a long stretch of time — from September until December and sometimes even into January. With over 400 varieties, or cultivars, of olives in Italy alone, there’s a wide variance of ripening times between trees. And blending different cultivars, something that EXAU does during the harvest so the olives are pressed together, creates a more complex, unique olive oil.

Mapes, Morisani and their team harvest for about six to seven hours a day so they can take their olives straight to the press, which is a short drive from their farm. They then wait another 2-6 hours at the press and then tank the fresh oil until it’s ready for bottling.

Today they still work with a team of people — chemists who monitor the soil, harvesters to help with labor, and the owners of a local Calabrian mill — which ensures that they’re respecting the local economy and keeping the tradition alive within the town of La Castella.

As a direct-to-consumer company, EXAU is able to cut out the middle man. It also means the couple has more on their plate with the tricky business of logistics. But both are pleased with their steady growth. They have plans to expand into food eventually.  “[We’ve thought about] jarred foods, so maybe olives, tomatoes or peppers. We’re still exploring, but so far the number one requested item is jarred tuna and jarred olives.” They also want to mentor women who want to get into the agricultural space and eventually have their own facility to own the milling, tanking and bottling process.

The couple now has one foot in Texas and the other back in Calabria. The U.S. operations involve the marketing and social media, and Italy is where the olives are grown, harvested, and pressed. While the olive oil is currently only available in the U.S., the EXAU team has plans to expand into Canada in 2021 and hopefully to Europe the following year.

Mapes’ most important mission, however, is to share her love of high-quality artisanal olive oil with the world, but she wants to clear one thing up: “[People think] you can’t cook or fry with olive oil, which could not be further from the truth. We cook with it every single day. We fry in it. Heat it on low to get to know an oil and then move up from there.”

And to bring out the best in a high-quality olive oil, Mapes suggests keeping it simple  — a bruschetta of tomatoes, olive oil, basil, and salt on toasted bread would do the trick quite nicely.

To learn more about the EXAU Olive Oil team, where to purchase and find out about new releases, visit their website at https://exauoliveoil.com/. You can also visit EXAU Olive Oil on Instagram.