South Africa’s Most Eccentric Hotel and Ancestral Home of the Zulu Blonde: The George Hotel 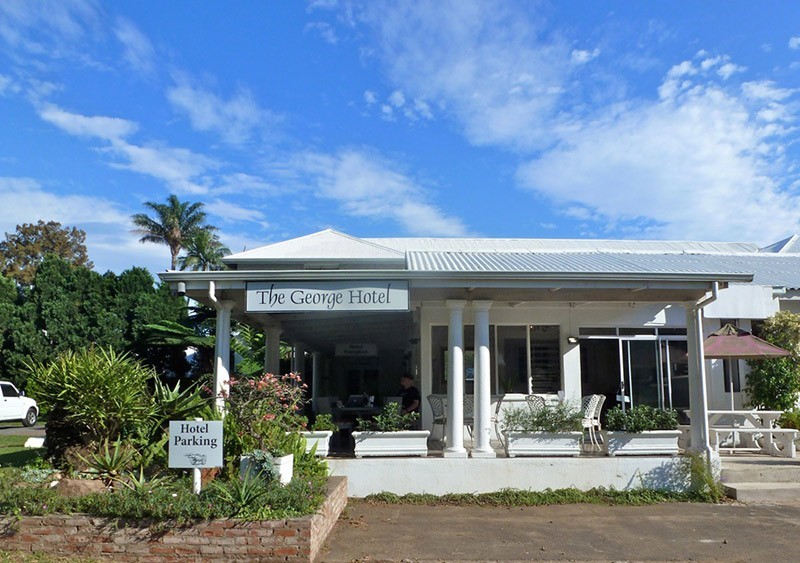 How The George Hotel got its name depends on who you ask. One person, when I recently stopped in Eshowe to check out what has become a landmark in this Zululand town a little more than an hour by road north of Durban — and not just for arty folks and beer drinkers; the ANC had booked out the place for a convention the day I arrive — tells me “George” was the Norwegian who bequeathed the whale harpoon gun that stands on the lawn out front.

This was quickly discredited by a less romantic tale that now eludes me.  Needless to say, the hotel was not named for King George V, as I had suspected, given that his historic visage graces the hotel’s bathroom signs.

A Place to Play and Create

What is not, however, is that The George earns its “most eccentric” tag thanks to a happy collaboration over the past four years or so between Richard Chennells, owner, who is upgrading The George to make it an upscale “destination” establishment and Peter Engblom, one of KwaZulu-Natal’s best-known creatives. Engblom, who can point out the junior school he went to just down the street, also happens to be a walking Wikipedia equivalent on the tree-filled, spread-out rural town — and on Zululand as a whole.

Chennells is doing the structural work and big-picture visioning. Engblom, meanwhile, has been given virtually free reign to use the hotel as a large hanging space. A permanent exhibition. A place to play and create and enhance. He has work-live quarters there and studio space.

But the real studio is the hotel. The bedrooms. The bar. The corridors. The reception area. The new small lounge decorated with hundreds of old books that cost him R1 (about 8 cents) each. The dining room, which is grand and inviting with a menu to match.

Engblom honors Zulu sculptors and artists in some of the bedrooms, each of which has a theme. His imaginative self-dyed fabrics curtain many of the windows. His assembled quirky collages comprised of old photos, postcards, screened prints and found items with historic and/or tongue-in-cheek carnal themes decorate many of the walls.

He has also given ample space to his Mpunzi Shezi series, examples of which can be seen in galleries around Durban and which will go to Austria for an exhibition in a new gallery Durban architect Paul Mikula is opening in a cave in Salzburg. Engblom’s brief is to make the space work and in return, he will be the first to exhibit there (in September 2016).

Engblom, a history buff who knows how to present history in an entertaining way, has, as part of the decor, blown up historic prints for his themed rooms.

I slept, for example, in the John Dunn corridor where, along with Eshowe’s excellent Fort Nongqayi Museum Village, which architect Mikula had a large hand in setting up, you can learn more about Dunn — South Africa’s most famous Scottish immigrant (John Dunn of Inverness), who became diplomatic adviser to Zulu King Cetshwayo in the mid-19th-century and fathered more than 117 children by 48 Zulu wives — than you ever hoped to know.

The 100-plus-year-old hotel that once housed the Zululand stock exchange has a history that includes a number of owners (including a George) before Richard Chennells (also from an Eshowe family) took it over.

When Chennells bought the place, it was well-known for its busy bar and neglected hotel rooms.

Among other things, he has enlarged the bar and moved it outback. Being bigger, it’s perhaps busier, plus you can watch magnificent sunsets from the deck out over the forest. As The George is the ancestral home of the Zulu Blonde Ale, made right here at Chennells’ Zululand Brewing Company, it is fitting that the bar should look onto this soon-to-be-expanded facility.

Zulu Blonde proved such a hit in Britain that it is now brewed and bottled in Bath (a city in the county of Somerset, England). Chennells trained as a craft beer brewer in the United States. Not surprising, given the expansive range or craft and artisanal breweries and brewers.

The beer is not sold bottled in South Africa. But at any time, there is Zulu Blonde being brewed out back in the brewery, along with a second, dark lager called Ninja Inja.

In South Africa, it is sold only tap in this bar. You have to be lucky and arrive on time to drink it. And be warned, it disappears fast. The George’s bar (a sign from the hotel pointing to it provocatively reads, “Pablo Esco Bar: Never Pull Out”) operates as a gathering place like a traditional town square. Engblom’s decor ideas, many involving hot women and bright colors, raise temperatures before you lift a glass. Locals and visitors gather there to chat and drink and to eat pizza from the hotel’s new wood-fired oven.

It is also known as a music venue. Regular gigs and the attention they attract are another reason the beer disappears fast.

During my quick two days spent at The George, I packed in some of these Eshowe highlights. A visit to Fort Nongqayi Museum Village where tour guide Zanoxolo Mkhize took me to the chapel and gave me a brief lesson on the Norwegian missionaries who brought Christianity to the area. Norwegians, in part, sponsored the museum's upgrade. In the old fort, he shows me the area’s first newspaper, intriguingly titled The Sausage Wrap, and the original tsetse fly eradication trap (pictured above).

On the same property, we skimmed through the Mikula-designed Vukani Museum, which is a trove of basketry and clay that is now dying out, which when collected by a Swedish visionary revived the then-dying (and now dying again) art of basketry.

We walked the Dlinza Forest aerial boardwalk, built on towering stilts and peaking at the top of a soaring metal tower that serves as a look-out over the top of the forest. We pop in at the Wall Room Cafe at The House, which is a restaurant and hang-out venue that is cool and trendy enough (with a menu to match) to be situated in some upscale big city suburb.

We buy T-bone steaks at the funky SuperMeats butchery on the main street and shisa nyama  (African barbecue over fire and a grate) them to perfection over a fire and a grate shared in the backyard with the locals then trip our way back to The George through the dusty and bustling taxi rank.

The George, by any name, would rank high in the eccentricity stakes. But come to think of it, the idiosyncrasies extend way beyond the hotel. Eshowe could easily don the tag “South Africa’s most eccentric rural town.”

For more information about the town of Eshowe, visit www.zulu.org.za/destinations/zululand/eshowe.  To plan your visit to The George, check out the reviews on TripAdvisor.com and also visit the hotel’s site at http://www.thegeorge.co.za. 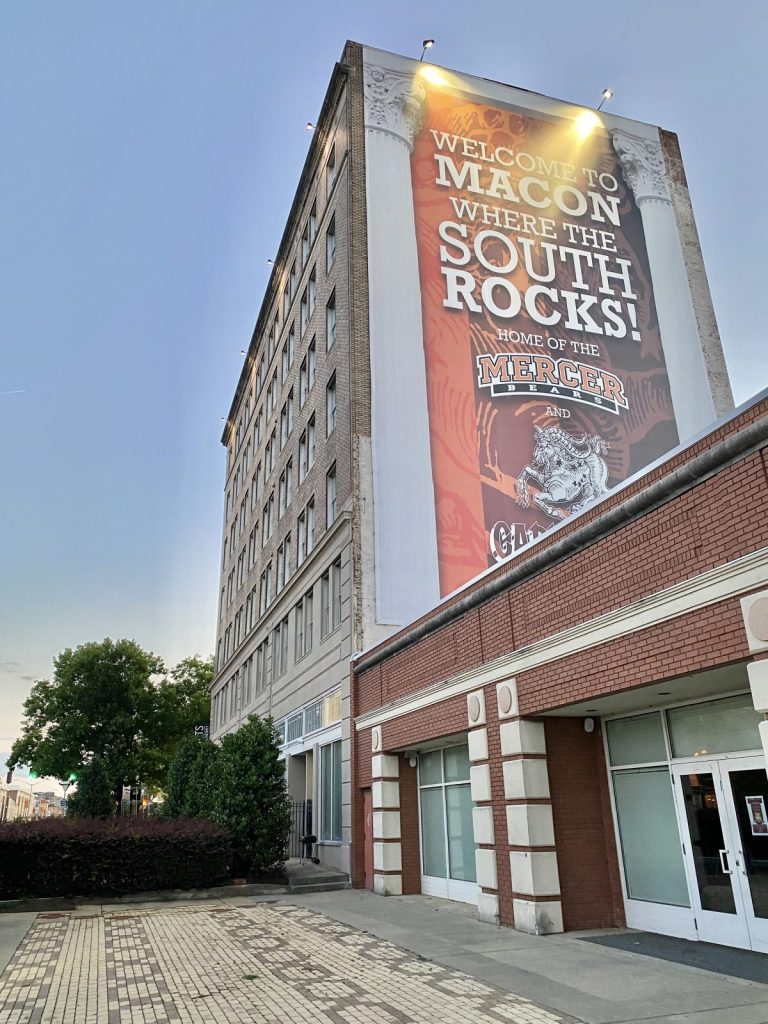 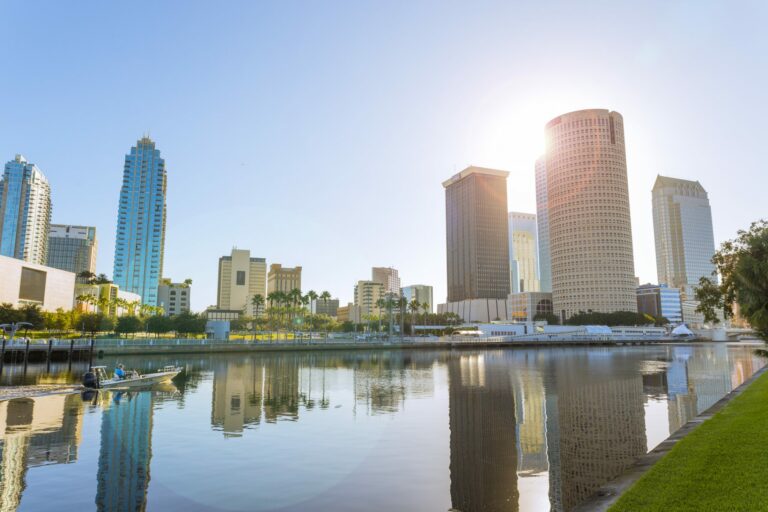 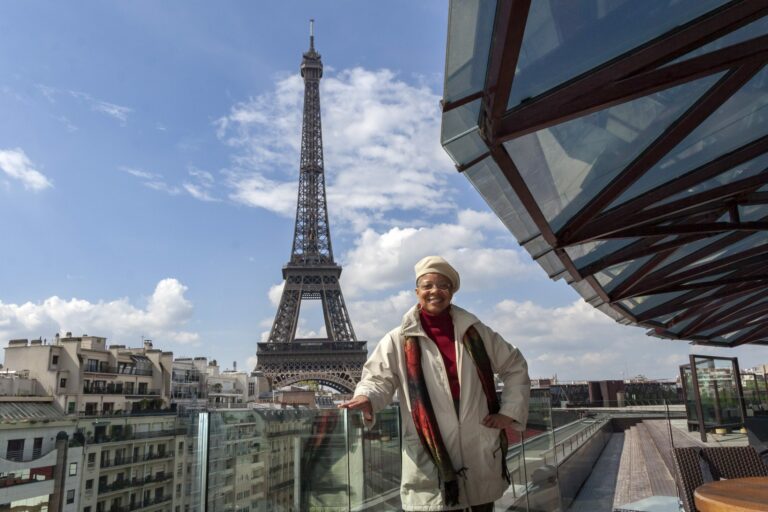