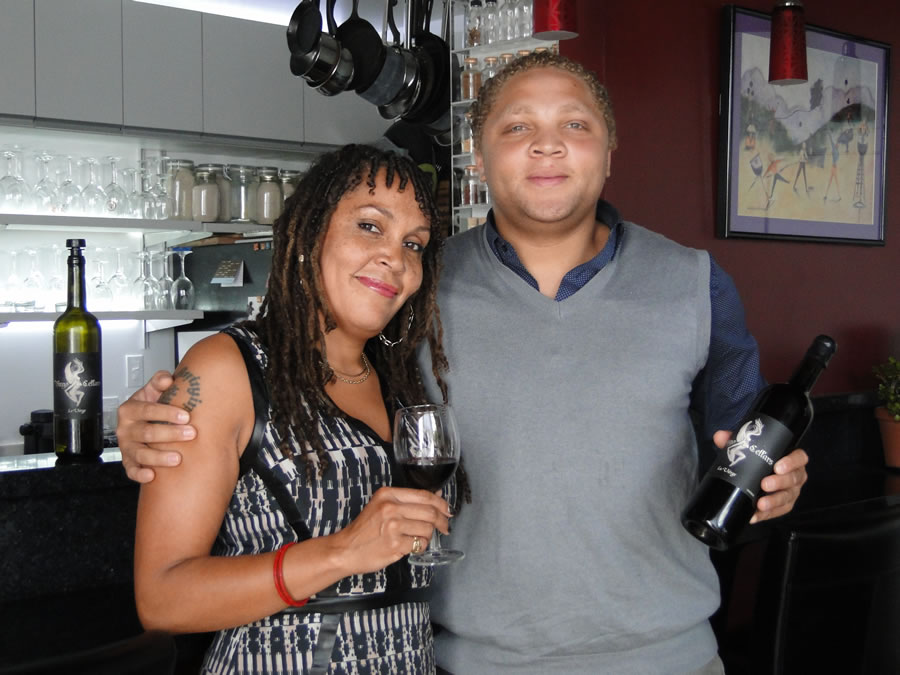 Over the last five years, we have showcased a lot of great stories about black winemakers, but I have to admit, this story about Stefanie Jackson and her son Ajmal Jackson-Brown is thus far my favorite.

It is not every day that you chat with an African-American female winemaker, first and foremost, in the United States who received a full scholarship from NASA to study marine biology at Jackson State University but eventually changed colleges and major going on to graduate from the University of California at Berkeley with a degree in African-American studies.  Oh and she speaks fluent French.

The lifelong learner and owner of Virgo Cellars based in Oakland, California didn’t have a thought about becoming a winemaker but she was definitely a vino fan.  “I was one of those kids who wasn’t thinking about a job after school. I went to school to learn and that made coming out of school rather difficult,” says the U.K. born winemaker who is the mother of one.

“I hit 30 and was kind of having a crisis.  I was crying to work.  I was hating the work I was doing.  I would lie and call in sick and I was looking at my son, I am a single mom, and this is no sort of an example to set for him in terms of work ethic.”

Following her heart, she asked herself what could she do for the next 40 plus years every day and love doing it.  The answer: wine.

This was a natural fit for Jackson who took her first sip of bubbly (unknowingly to her parents) at the age of three while the family was attending a wedding.  She laughs remembering how she loved the bubbles and taste and looking back, realizes a seed had been planted.  Given her European bloodline, occasional wine at the dinner table supervised growing up nurtured this affinity for wine as an adult.

Moving full speed ahead with getting into the wine industry, she interned at Rosenblum Cellars after being connected through a family friend.  “Within the first week I was completely taken, smitten with it and I said this is it, I am going to go back to school and get another degree and study winemaking,” says Jackson. This decision soon would set the stage for her son to eventually enter the business much later.

Making Wine of Her Own

Thinking another degree was the answer to becoming a winemaker, Jackson attended pre-requisite classes during the day and working at night.  Finally, a mentor at Dashe Cellars (also in Oakland) opened her eyes to the fact that a degree wasn’t what she needed, it was experience.  Brushing up on chemistry and biology, she worked for various winemakers to learn the craft.  This journey began in 2003.  Today, she is the owner of Virgo Cellars, a boutique private label that produces red wines for the most part.

Witnessing her journey from the beginning is her now adult son, Ajmal, who is a part of the company overseeing the business side while Jackson focuses on the art of making good wine.  “He was washing barrels when he was seven, 8-years-old, he was the little kid working the bottling line.  He’s grown up in this business.  He has an understanding of exactly what it is I do but now he is bringing some business acumen needed because I don’t have the time to go get a business degree,” says Jackson.

Together, the two are planning to grow and expand Virgo Cellars as the first African-American mother-son team.  Jackson is also a guest winemaker for Pat Paulsen Vineyards who has a tasting room in Livermore off Tesla Road and a private venue location in Oakland known as EBGB.

As a wine label to keep on our radar, we’re looking forward to watching Jackson and her son usher in a new face in an ever-changing industry and world.

For more information about Virgo Cellars, visit their website at virgocellars.com.