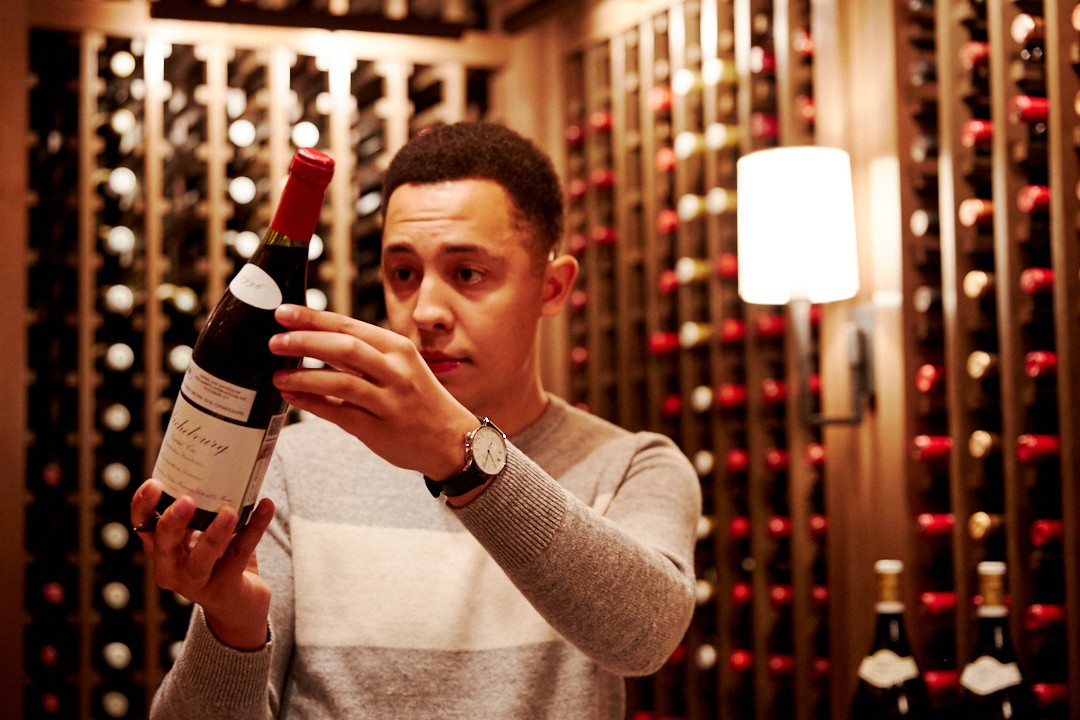 Precision and hard work, partnered with thoughtful networking, propelled Thatcher Baker-Briggs’ career as a chef in some of the most innovative fine-dining restaurants in North America. But at a point in his career when his work more than speaks for itself and he could effortlessly take his pick of restaurants in which to work, Baker-Briggs changed course and started from scratch as a sommelier.

As a chef with a resume that reads like a “Best Restaurants Around the World” list, Baker-Briggs blissfully fell headfirst into wine and never looked back.

The Makings of a Chef

“I didn’t grow up in a very food-driven house. My mom made Kraft macaroni and cheese and hot dogs, and she’s said to me, ‘The reason that you wanted to be a cook was because my food was so bad,’” he shares.

Baker-Briggs was 10 when he became enamored with cooking shows such as “Chopped.” Upon noticing his fervent interest, his mother gifted him with a cooking class at one of the only fine-dining restaurants in the region of Windsor, in Ontario, Canada. It was here that he stayed for the next several years, starting as a dishwasher at 13 years old. As the months passed, the head chef gradually introduced Baker-Briggs to other responsibilities such as manning the cold station, shucking oysters and peeling potatoes and carrots. His love for cooking was cemented and it was at this restaurant where he built the foundation of his career as a fine-dining chef.

After his time in the restaurant, along with a chef role in a sushi restaurant, Baker-Briggs completed stints in Vancouver, Toronto and eventually the Michelin star restaurant COI in San Francisco. He looks back fondly on this time and recalls how it was here that he learned to think critically about seasoning.

At COI, Baker-Briggs reveled in his first proper introduction to wine. In his next role, back in Windsor for a consulting gig at his former workplace, Baker-Briggs was tasked with, among other things, reworking the wine list. He felt a tug during this time — most chefs didn’t know much about wine and the concept of the disconnect between the front and back of house was one that was growing and begging for a fix.

“I didn’t want to be a chef that didn’t understand wine, and I definitely didn’t want to be a sommelier that hated cooks. I realized that I needed to start to learn about wine and so I bought some books, started reading, formed a little group of the servers at the restaurant to taste a bunch of wines together and study together.”

Just nine months later, Baker Briggs passed his certified sommelier exam with the Court of Master Sommeliers. To begin his front-of-house career, Baker-Briggs started from the bottom and worked his way up through the ranks of the Michelin star restaurant Saison. On Baker-Briggs’ first day of working the floor (after spending nearly a decade as a chef), he was drinking unimaginable wines — ones that helped to shape his career and define his eventual consulting business.

Baker-Briggs headed to Japan, where he spent a year and a half as sommelier and chef at the notoriously impossible-to-book restaurant Takazawa. With only three tables and a higher turnover of bottles, Baker-Briggs had the unique experience of tasting a plethora of rare bottles, building close bonds with customers and eventually expanding the wine list from 90 to 1200 selections in nine months.

Taking that experience back to San Francisco, he aided the Saison group with the opening of a new venture. His focus remained on unifying the front and back-of-house operations to create a seamless experience for both staff and patrons. But here’s where the decade-plus of crafting memorable wine and dining experiences merged. A VIP friend was building out a new wine cellar and asked Baker-Briggs for help in procuring bottles. The private requests for obtaining rare bottles snowballed, and soon Baker-Briggs found himself on the receiving end of plenty of inquiries.

“I thought, well this would be interesting if we could develop a model where we could fulfill [requests] … right away, and so I kept playing around with the idea. We started to carry and build our own inventory and … we got an import license.” Baker-Briggs then created an online boutique of select wines. He hired several team members and created Thatcher Wine Consulting, a boutique wine consulting agency that specializes in organization, procurement and logistics of hard-to-find wines. Today, he travels throughout Europe, attending events and visiting wineries in Spain, Germany and France to ensure his site’s selection stays ever so slightly ahead of trends.

With bottles ranging from $30 to well into the thousands, there’s quite a range for all levels of collectors and wine lovers.  “I try to make it a little bit more approachable. There’s a lot of communication with clients that are new purchasers on the website. We’ve seen them buy a few bottles and we’ll reach out to them and say, ‘Let us know if there’s anything you need or if you have questions,’ and it turns into a lot more communication with customers.”

While accounting for more at-home drinkers because of COVID-19, Baker-Briggs is also on the front lines of another wine trend. “I think we’re at a point where there’s a pretty big generational change. A lot of young people are getting interested in wine. That is very different from the ‘old guards’ of Burgundy that have systems that haven’t changed in 40 years. It’s interesting to see that.”

Baker-Briggs enjoys the classics, but he also takes inventory of producers who will become the classics in a few years. “There’s plenty of super classic producers that are incredible and are making some of the greatest wines but they are expensive. So now what we’re focused on is seeing who is making incredible wines today that you should be buying case quantity of, because in a few years from now it’s not going to be at that price once it gets discovered.”

Within recent months, the wine world has been shaken upside down as sommeliers and wine professionals have chimed in with their own experiences often stinging of racism. When asked about the push for equality in the wine world, Baker-Briggs replies, “It’s a complex question and I think people try to make it much more simple than what it is. To simply say there are not enough Black sommeliers is not really the problem, right? You have to ask yourself, ‘Are Black people walking around being like I really want to be a sommelier?’ That’s not the case. The problem comes from a lot of inequalities. It doesn’t just stem from the wine world. It stems from inequalities in life.”

But his hope for the future of wine is high, with faith in the next generation of wine professionals who are set on creating a level playing field. “How do we build up the ability for everybody to get some exposure to wine? I think that should be the goal… getting younger people inspired because ultimately, that’s when you start to see these really exciting changes.”

The Future of Dining Experiences

Baker-Briggs’ goals for the future, while slightly delayed because of COVID, are still in the works. He eventually wants to create a hospitality group with proprietary restaurants and has no plans to slow down the consulting side of business.

“I want to continue to expand our offerings on the site and create new and unique opportunities for [winemakers] to gain exposure. I hope that we can start doing dinners with special chefs and great wine pairings. That was something we were doing [pre-COVID] and I would love to be able to recreate that again.”

To connect with Baker-Griggs and to shop his collection, visit https://thatcherswineconsulting.com/ and for a glimpse of wine history in a bottle, follow him on Instagram.