The Breakfast Klub: A Houston Destination with National Recognition 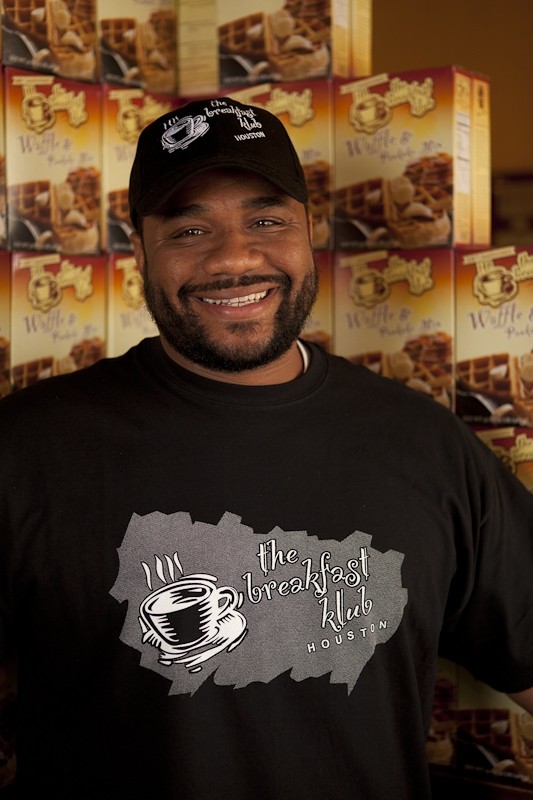 As boys growing up in Houston’s Fifth Ward, breakfast excited Marcus Davis and his two brothers.  As they rode home, their mother would sometimes ask if they wanted breakfast for dinner. The owner of The Breakfast Klub in Houston remembers how happy that question made them.

“It was a treat for us, but really, she was tricking us because she didn’t feel like cooking, and probably at the time, we couldn’t afford much more,” says Davis. However humble those dinners of eggs and biscuits might have been, breakfast became his favorite meal.

Davis, a 41-year-old husband and father of three, created one of Houston’s favorite destinations by combining his love of breakfast with a desire to fill a void in his beloved city. He noticed the popular coffee houses did not serve grits. The breakfast shops had the grits, but poured coffee that tasted like dishwater. Davis decided to give people in Houston a place where the coffee is memorable and the food legendary by opening The Breakfast Klub in September of 2001.

“I wanted to have a place that when people said Houston they immediately thought, ‘Man, I’ve got to go to The Breakfast Klub,'” says Davis. Mission accomplished. “Good Morning America,” USA Today, Forbes, Esquire and the Houston Press have all recognized The Breakfast Klub as one of the best places to eat breakfast in the country.

Davis came up with most of the restaurant’s dishes by experimenting in his kitchen or recreating recipes he learned from his father. Jerry Davis had the most influence on his so n’s passion for great food and satisfying flavors. “My dad was the guy. When people would see him, they’d say two things, ‘Man, you sure played that piano last night,’ or ‘When you going to cook some more food?'” says the Houston native.

One of The Breakfast Klub’s slogans is, “The coffee shop that just happens to serve good food.” Davis put that claim to the test in a Wings & Waffle Showdown on the Steve Harvey TV Show in February. The Breakfast Klub was victorious in the blind taste test against Chicago’s Hash House A Go Go, a chain restaurant.

The Houston restaurant’s menu features breakfast plates, breakfast sandwiches and three-egg omelets. The homemade biscuits, sausage gravy, pork chops and pancakes are popular. The French toast made with thick-sliced Texas bread is a favorite. The coffee is as huge a hit as the signature dishes of “Wings & Waffle” and “Katfish & Grits.” Heart-healthy breakfast plates and lunch items are also available.

A Place for Everyone

One of the biggest thrills for Davis is seeing people who might be worlds apart eating together at The Breakfast Klub. Celebrities such as Beyoncé and Jay-Z have stopped in, but one of the restaurateur’s most memorable photographs captures a well-dressed patron’s new Lexus parked by a construction worker’s backhoe.

“You’ve got blue eyes, gray hair and turtleneck sweaters. Right next to that, you’ve got tank tops, tattoos and grills. I love it when I turn around and see conversations start up between strangers,” says Davis.

The Breakfast Klub’s owner gets even more joy out of being able to tell someone, “You’re hired.” He loves giving an applicant a chance when few other employers would have. The entrepreneur sees himself as the chief steward of TBK Holdings, Inc., with the responsibility of keeping 50 people employed at three restaurants and a lounge. He also likes to share his strategies for success with college students and other business owners.

The restaurateur and his wife, Mel, are now focusing on building The Breakfast Klub’s brand. They are expanding TBK Foods with signature products offered online and at the restaurant, including TBK Koffee Kollection and Seasoned Chikin Koating.

Ultimately, Davis wants his customers to experience what he felt at his great grandmother’s home in Houston’s Fifth Ward. That is, the joy of being in a place “full of warmth, full of love and always full of food.”

The Breakfast Klub is located at 3711 Travis Street at Alabama in Houston, Texas. For more information, visit http://thebreakfastklub.com or call 713.528.8561.