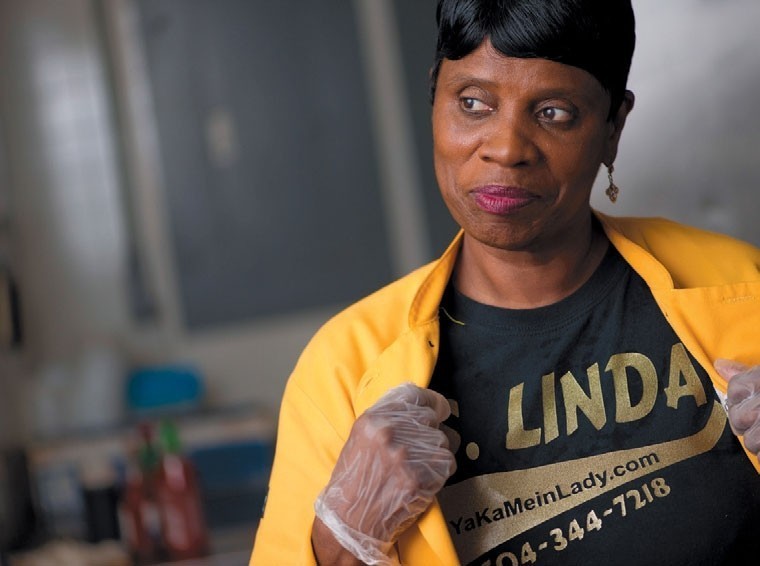 Yakamein. A dish that I had never heard of before, even after visiting New Orleans at least three times over the years.   The noodle soup that is made with a savory broth, meat and spices and garnished with green onions and an egg is a New Orleans staple and tradition that is not well known outside the city but one that has reinvented the life and career of native Linda Green aka Ms. Linda.

“We know that it is a New Orleans dish. We know that much. It has always been in the Black community,” says Green who worked for the Orleans Parish School Board for 25 years before Hurricane Katrina claimed the city and her job in 2005. Celebrated chef Leah Chase is noted as detailing the origins back to the 19th century when the Chinese were brought to New Orleans to build the railroads and work sugar plantations. It was during this time that the soup was adapted to Creole clientele. Others believe it was introduced by African Americans returning from the Korean War who were nostalgic about the dish they enjoyed while serving there. Whatever the origins, it is a dish that has made Green an icon in the city.

RELATED: Quentin Love: Transitioning Communities One Meat at a Time with TurkeyChop

The Makings of an Iconic Dish

Following in her mother’s footsteps, Green learned all of her culinary secrets watching and cooking with her most important and unforgettable mentor. “My mother was a fabulous cook,” shares Green. Her mother worked for the same school board for 30 years, would feed anyone needing something to eat, catered and sold Yakamein which is also called Old Sober; a nickname given for its ability to sober you up. A culinary staple that goes back at three generations, Green made sure she kept it alive before her mother passed. “We said you can’t take this with you,” Green says recalling how her family sat around her mother’s hospital bed writing and tape recording the secret to her yakamein and other recipes that she was known in the community to cook.

Green describes her cooking as old school and doesn’t shy away from what is happening in today’s kitchens but is very comfortable keeping to her own style that definitely includes her holy trinity (onions, bell peppers and celery). A style that has attracted the attention of Anthony Bourdain and led to an appearance on his show, “No Reservations,” as well as competing and winning on the Food Network’s “Chopped!” Soon other shows and media outlets came calling. Picking up awards wherever she cooks, residents as well as tourists gladly stand in line for Ms. Linda’s yakamein, vegan gumbo and other soul food classics at festivals, local events and along the city’s second line routes.

After Hurricane Katrina hit, Green had to start all over and as cliché as the phrase “necessity is the mother of invention” is, it sums up Green’s will to survive and keep doing what she loves; cooking. “It was not a dream, but a livelihood. After Katrina, I lost my job and I was devastated and I didn’t know what I was going to do.” Her mentor, music executive Adam Shipley, gave her a job at Tipitina’s where she cooked for celebrities such as Bon Jovi, Carmen Elektra and Paul McCarthy. The reaction and love from over the years from students, tourists, clients and anyone tasting her food was the catalyst for becoming a full-time entrepreneur. “The Ya-Ka-Mein Lady” was born and is now her brand that she proudly showcases for the world to see with her signature t-shirt and smile.

Greens plans to one day expand the brand to include her seasoning and noodles on the shelves of retailers but for now is taking it slow and waiting for the right time and opportunity. I tried to get her to tell me a little of what is in the seasoning that she uses in everything from her greens and gumbo to fish and chicken. But to no avail, it still remains a secret.

Enjoying the ride to her culinary success, Green admits that it has been bumpy at times. “It wasn’t an easy road. I had to work hard to get where I am at. But it’s has been a beautiful ride and I still have some riding to do. I haven’t got to where I need to be and I will get there.”

To learn more about Green, yakamein and how she can cater your next event, visit her website at www.neworleanssoulfood.com. You can also follow her on Facebook.

Couple Survives Hurricane Katrina and Rebounds with Painting with a Twist Business
The Breakfast Klub: A Houston Destination with National Recognition