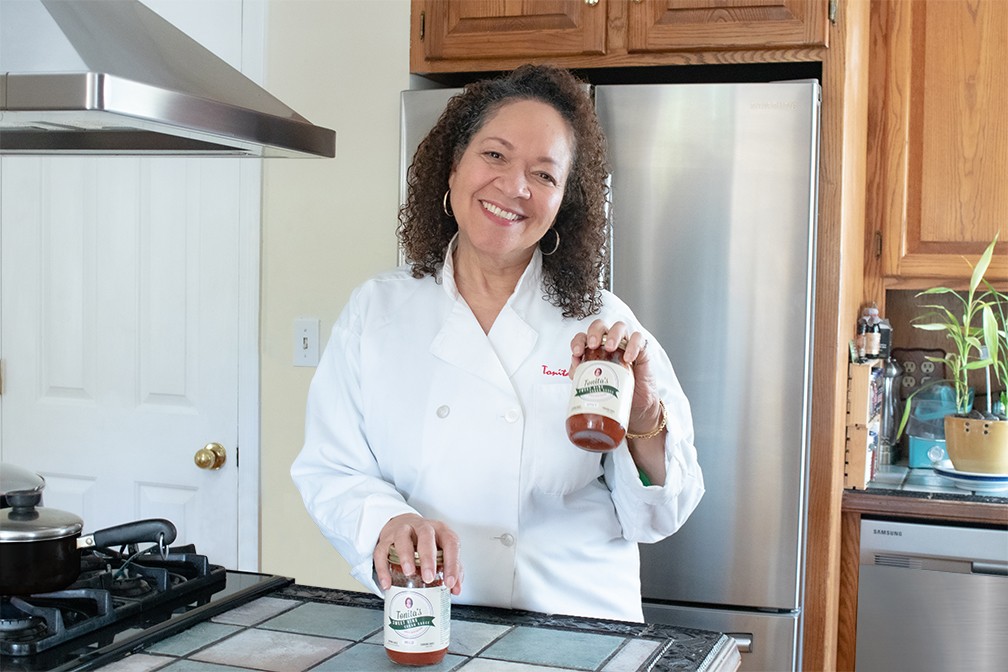 There was always a little mystery surrounding her ethnic heritage. Her family’s love of art, music and dancing provided some clues along with the Spanish first names her parents gave Tonia Chapple and her sisters, Venita Antonia and Rosetta. “As a young teen, I wasn’t really concerned about heritage. In my household, we racially identified as Black. But I had a sixth sense, or you can call it intuition, that culturally there were untold stories,” says the founder of Tonita’s Kitchen.

Chapple knew her father spoke some Spanish. The connection to Cuba that surfaced after she created Tonita’s Sweet Vine Cuban Sauce was still vague and unexplained. One year, a teenage friend suggested Chapple honor her father by wearing a Cuban ribbon to gain free admission to a Celia Cruz concert. “I questioned her remark and she dismissed it and said everyone knew he was Cuban. I said he never told me and she laughed it off. We never talked about it again, but I put the ribbon on and represented Cuba.”

The food entrepreneur picked up a few more clues to her father’s heritage while visiting relatives in New York. She eventually learned that her dad, Bill Burroughs, and his four brothers could hold conversations in Spanish. “My father spoke French, Spanish and English. He learned some German by being in the war. My Uncle Earl, the songwriter, knew French, Spanish, English, Latin, German and Chinese due to his travels,” Chapple says. Earl Solomon Burroughs, AKA Jack Hammer, co-wrote the 1957 Jerry Lee Lewis hit “Great Balls of Fire.” The brothers rarely spoke about their grandfather being Cuban and a dancer. “They all were amazing dancers, artists, singers, pianists and storytellers. One uncle could play the piano by ear.”

The California native knows more about her familial links to Cuba than she did at age 13 when her father passed away. Her heritage provided the foundation for her culinary sauce creation.  She blended what she had learned about cooking growing up when she built the sauce from a tomato-based sofrito and added Creole and Caribbean influences. “Little did I know I was getting a glimpse of my father’s Cuban heritage on his father’s side and what destiny had in store for me,” Chapple says.

Growing up in San Francisco, Chapple fell in love with the different cuisines prepared by a diverse group of neighbors. She sampled the foods of other cultures long before she started making her sofrito with onions, garlic, tomatoes and peppers. A Mexican family’s enchiladas became one of her favorite dishes. She tried making them herself but couldn’t find a store-bought sauce she liked. Chapple decided to make her own sauce. “I started thinking I would use the basic base from my mother’s side of the family, which is more Creole.”

Chapple did hear about the Creole heritage in her mother’s family, who migrated from Louisiana to Texas and eventually, California.  Chapple shares, “My aunts on my mother’s side spoke of their parents, grannie and papa speaking Patois. In fact, my Aunt Loretta had a saying in Patois she would repeat when she fussed at us.”

It was Aunt Loretta’s tomato-based sauces that Chapple relied on when she made the first pot of Cuban sauce. The Louisiana influences mixed together with the Cuban sofrito and some Caribbean herbs gave Chapple the perfect sauce for her enchiladas and many other dishes. “My mother was having a gathering at her house and I was asked to make enchiladas. I was about 20 or 21.”

The raves she got and the many requests for her enchiladas prompted Chapple to put her sauce in jars for relatives and friends. Her stepfather encouraged her to bottle the sauce that would later become the Tonita’s Sweet Vine Cuban Sauce found on the shelves of natural food stores. “I would cut up the tomatoes, garlic, cilantro and onions, and let it sauté first before I put in the tomato sauce. I was taking the steps my aunt would do to layer flavors,” Chapple says. “Then I started using peppers to make it a little hotter and I went for the habanero, which is more Caribbean.”

Chapple believes she somehow drew from her Cuban heritage without knowing the sofrito she used in her sauce is a cooking method common in Cuba. “I believe we inherit our taste buds and talents. I often remember, as a young teen, my father getting me to begin the preparation for dinner. He would tell me what to add to the recipe and although he wasn’t around long enough to train me on how to cook, he left a big impression on me about what flavors he liked.”

Getting flavors right required another ingredient: music. Chapple’s mother, Elouise, was a talented pianist and both her grandmothers had pianos in their homes. “I grew up listening to Harry Belafonte, Billy Holliday, Miriam Makeba, my father’s favorite artists and Latin love ballads,” says Chapple. The music is a fond memory from Sunday mornings with her mom and dad. “He would play his music and ask my mom to dance with him in the kitchen.”

It is no wonder then that her sauce-making is accompanied by music that keeps her feet moving. “To get my blood going making these big pots of sauce, I would play my music. I like Willie Colon, Celia Cruz and Gloria Estefan and I like my R&B music or jazz. I play whatever I’m in the mood to hear,” Chapple says.

When it came time to go commercial with her Cuban sauce, Chapple added “Cooked with Rhythm” to the label. Buyers can also see that the sauce is made from all-natural ingredients with no preservatives added. “They really appreciate it when they look at the sodium level. We really don’t add more salt. It’s just what is in the tomato sauce. We don’t put white sugar in it. That’s something I’m really proud of. I stick to what I believe.”

Chapple only wants to sell a sauce she would give to her own family. It’s so versatile you can use it right out of the jar as salsa or dip with tostones or tortilla chips. “I do a lot of Creole dishes with it. I do black beans and red rice. I do pulled chicken and pour the sauce on to make sandwiches. You can freeze the sauce. It never goes to waste.”

A trip she made in 2003 gave Chapple a chance to connect childhood influences with the Cuban sauce that fresh tomatoes and peppers give an island taste. She traveled to Cuba with her sister and her daughter, Myisha, who was just starting college. “It was like a pilgrimage to go there. That’s when I really saw that I was making their sauce and didn’t even know it.”

That pilgrimage also gave her more inspiration for the label on her jars. A doorman in Cuba called her Tonita instead of Tonia. That inspired Myisha, a business communications major, to suggest her mother call the sauce Tonita’s Sweet Vine Cuban Sauce. Chapple returned from the trip, determined to do more with her product. She took the sauce to festivals and fairs to find out what people thought of it. “That’s where I met New Orleans Bill (Bill Washington), who does the Creole potato salad. He became my consultant and mentor for how to navigate the food industry,” says Chapple.

Chapple’s son, Jonathan, and Myisha assisted her at food events. “They would help me sell and decorate our booths. My son would do the calculations of how many bottles we needed. I was trying to get people to use the sauce in different ways.”

Chapple got her sauce business going while she still worked as an administrator and teacher for the Oakland School District. When the state took over the city’s schools, she decided to use her skills as an educator in the business world. She took a business administration course at the University of California’s Haas School of Business in Berkeley. Her Cuban sauce was not her first effort at being an entrepreneur. “I wanted to sell multicultural books because children were reading books that didn’t represent them. I started a business called Cultural Gatherings. I would go out and sell these books at different events and education fairs,” Chapple says.

By the time the former educator left teaching in 2017, she had turned her attention to getting Tonita’s Sweet Vine Cuban Sauce into more than 15 stores. However, Chapple could not maintain her initial success after one of her biggest fans became ill. She spent much of her time taking care of her mother, Elouise Mayo. “After my mom passed away in 2016, I realized I needed to stop, regroup and build a new foundation. That’s why I went to Main Street Launch because I wanted to grow the business.”

The organization in Oakland helps small businesses with lending strategies and achieving long-term results. Chapple has moved forward with a new label design and demonstrations on Instagram’s IGTV to increase online sales. The pandemic put a new deal with Whole Foods on hold after COVID-19 shutdown grocery store demos, food courts and most fairs and festivals. The creator of Tonita’s Sweet Vine Cuban Sauce is now focusing on expanding her market. “I really want to be able to sell to the restaurants and caterers. I want to build up my website sales and get into being a corporate supplier.”

Joy in a Jar

At one point, Chapple was bottling about 100 jars of her Cuban sauce quarterly. She hopes to exceed those numbers soon and offers this advice to other entrepreneurs starting out in the food business. “I would tell them not to jump out too fast. Build your foundation. Get your books in order and know your numbers,” Chapple says. “Figure out your break-even point and your margins, so you know if it is worth it to go out there.”

The Oakland entrepreneur suggests getting a mentor in the same food arena and checking out competitors. She also recommends meeting with potential suppliers because face-to-face sales pitches helped her get the Cuban sauce into Whole Foods and other stores.

Despite some setbacks, Chapple is as enthusiastic as ever about selling her sauce. She wakes up in the morning thinking about what to do next. That includes keeping alive her family’s Cuban and Creole heritage. She suspects there may be truth in what one of her sisters heard on a return trip to Cuba, that her paternal grandfather probably fled the island and taught her dad and his brothers to keep quiet about his origins. Today, Chapple and her relatives celebrate their Cuban legacy.

As her company expands, Chapple plans to donate a percentage of her profits to Cuban entrepreneurs. She sees it as her calling and a way of honoring her parents. “It was actually sort of mystical the way it all came about,” says Chapple. “You’re not pushing it, but it happens, and it takes you in the direction you are supposed to go. It brings me so much joy.”

Find out more about Chapple’s sauces in mild or hot by following her on Instagram or on Facebook. You can buy her products by going to http://tonitaskitchen.com, sending an email to info@tonitaskitchen.com or calling 1-800-318-6106.