At the Intersection of Veganism and Human Rights with Dr. A. Breeze Harper 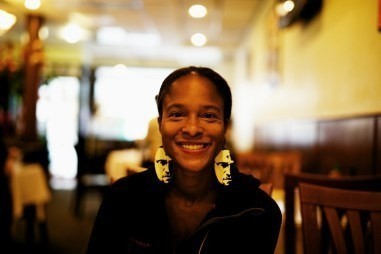 It is without a doubt that the #BlackLivesMatter movement has sparked a lot of conversations around the country and world.  At the center is the declaration that the lives of black men, women, girls and boys all matter.  Observing from the San Francisco/Bay Area as events occurred in Florida, New York and Missouri is Dr. A. Breeze Harper, founder and director of The Sistah Vegan Project, whose work centers around veganism, food systems and activism.   At first thought, one may ask, “How do veganism and human rights connect or intersect?”  Harper will make that connection with scholars, writers, activists and community organizations on Friday and Saturday, April 24 and 25 via her interactive web conference, The Vegan Praxis of Black Lives Matter.

She later moved to California to continue her work studying the dynamics of critical food geography and veganism with a focus on how one can be a cruelty free, post-racial vegan who is focused on the single issue of animal rights but yet not dialing in on other areas of oppression as a result of the production of vegan food.  “I really wanted to understand that consciousness and how it is shaped by food objects and the vegan food commodity chain. So how you can buy a Hershey bar that can be free of animal fat but it is harvested by enslaved children in Africa.  So there is a disconnect there,” says Harper.

Her work today continues around educating and bringing awareness in the vegan community, especially among white vegans, that there is an intersection between veganism and various layers of human oppression that is the result of vegan food production that should also be addressed and not just issues of animal cruelty.  She says one of the goals of the conference is “really getting vegans to understand that the way most of your food, even though vegan food, comes to you through the exploitation of human, usually non-white labor.”

Intersecting her work with the #BlackLivesMatter movement, Harper says this year’s conference topics came about partly due to the insensitivity of many comments and remarks she has been reading from the vegan community around the deaths of Trayvon Martin, Mike Brown and other black men who have been killed.  This once again shows the disconnect that many have who are adamant about protecting the lives of animals from cruelty and oppression, yet not willing to do the same for humans or the environment.

Starting at 10 am Pacific Standard Time, Harper will open the conference which will include celebrity chef and activist Bryant Terry, Lauren Ornales (director of the Food Empowerment Project), Kevin Tillman (founder of the Vegan Hip Hop Movement), Harlan Eugene Weaver (Davidson College) and Toi Scott (Afrogenderqueer.com) just to name a few.  The web conference goes  until 5 pm each day and will be recorded in the event that registrants are not able to tune into various discussions that range from “Cooking Up Black Lives Matter” with Terry, “From Critiquing Thug Kitchen to Revealing Vermont’s Speciesist White Agricultural Narrative,” to “We Need a Holistic Revolution: Vegan Ethics and the #BlackLivesMatter Movement.”

In addition, Harper will announce the Anti-Racist Changemakers award winners who are three vegan women involved in the anti-racism movement. Each will receive $1000 to help continue their work.

The cost of the conference is $45 for individuals and $35 for students.  To register and purchase, click here.  Partial or full scholarships are still available.  For information, contact her at sistahveganconference@gmail.com.

For more about Harper and The Sistah Vegan Project, visit her website at http://www.abreezeharper.com and her blog at http://sistahvegan.com/blog.  To check out her video demonstrating a recipe for racial tension headaches, click here.