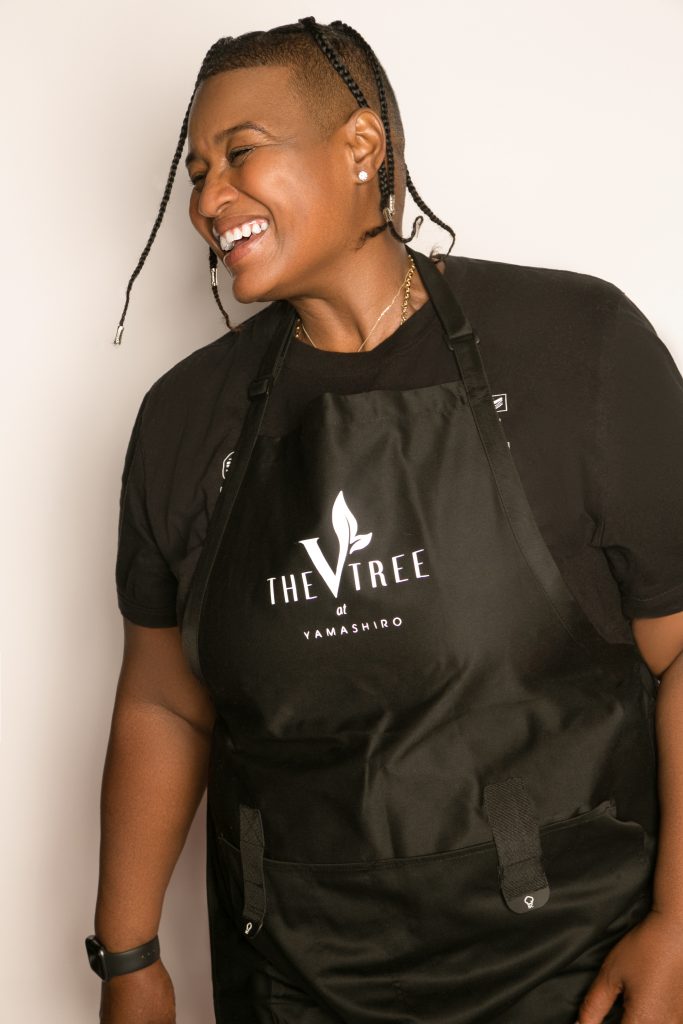 The Southeast vegan eatery concept opens to much acclaim amidst pandemic.

There’s a common saying that success is a lot of hard work and a little bit of luck. That holds true for chef Velvet Jacobs, owner of the plant-based soul food restaurant Veltree, who opened The VTree Hollywood in April this year. The restaurant is a dream come true that was made possible by the success of her original Charlotte, North Carolina location. She hosted an outdoor Juneteenth celebration as a soft launch announcing her entry into the West Coast dining scene, which quickly sold out with over 500 guests lining up around the venue waiting on either takeout orders or to grab a box of food to enjoy with live music on the premises.

“I feel so blessed. The support, the artists, the food, the whole atmosphere was just a vibe really. It was more than we could even have hoped for,” says Jacobs.  VTree is located inside the historical landmark that is Yamashiro, a 117-year-old Los Angeles mainstay and a coveted property nestled in the hills. “To even have a restaurant here, to be housed under one roof, that in itself is totally amazing,” she shares, adding that Yamashiro has a female executive chef of color and VTree is owned by women of color. “We are making history for so many reasons, being here at this particular time.” Jacobs and her wife Tre’ona Kelty-Jacobs — both restaurants’ names are a play on both their names — are delighted to bring the soul food plant-based experience to Los Angeles.

“It was a hit. Everyone loved the food,” shares chef Velvet. “And here we are, open and in the hills during a pandemic.” Currently offering delivery and takeout orders, she is planning for a grand opening for the indoor space by the end of August depending upon local regulations. What can one expect in terms of the menu? “Sticking with the tradition of what we do, which is soul food, we selected things that had been favorites for us,” says the chef. Think menu regulars such as signature krab cakes, BBQ ribz and mac n cheeze, but also new items such as eggplant parmesan, portobello steaks and fish fillets.  Jacobs is also working on offering her famed soy-based chic’n drumsticks and shrimp as frozen foods to prepare at home. Now in the pre-order stage, product will be shipped out in September.

Prior to opening her own space in Charlotte, she worked and became part owner in a plant-based vegan restaurant in Maryland owned by her family. “From that, my calling was different. I feel like God called me out so he can begin to show me my path and the things that were in my future. Lot of people ask me my formula — it was pretty much my faith and believing that God had something bigger for me. I just launched out into the deep and listened to an invisible voice and here we are about to open four more locations.”

Expansion plans include San Diego, New York, Atlanta and a fourth city that is still undecided. Starting out in the restaurant business, Jacobs had a different idea. “I wanted a little vegan grocery store, something like Whole Foods but all vegan. In my mind, I was opening a couple cafes, then we could branch off and start the vegan grocery store,” she shares. She also runs a nonprofit Vegan in the Hood, established in 2014, that has helped many underserved communities by teaching them how plant-based food and community gardens can make a difference. She built a reputation in D.C. working on government health awareness initiatives and senior citizen community initiatives being vocal about the plant-based lifestyle.

As a child, Jacobs didn’t like burgers and meat but was mostly on a standard American diet of protein, veggies and starch at home. As she got older, her sister transitioned to plant-based and introduced her to it. “Understanding why I wanted to eat plant-based, why it affected my diet and health and our community as African Americans, it made me think differently,” she says. “I had always been a chef and in transitioning, I leaned toward my seasonings and spices that my grandmother and great-grandmother used to season our food. The whole thing was spiritual, with me trying to stay true to our traditions as a family and the things that we love — the mac n cheese, the comfort foods, the barbecue ribs, things that I saw my family enjoying. We were able to replicate something that I love, which is soul food and are now sharing it with everyone else.”

While other food-centered businesses are shutting doors in the midst of the pandemic, Jacobs is thriving and shares her advice for others in this tough market. “Planning is everything. Make sure there’s a plan for backup in case it doesn’t work the way you planned to,” she says. Curbside service at VTree was created as a response to the pandemic delaying the grand opening of the restaurant.

Visit Veltree at 7945 N. Tryon Street in Charlotte or VTree at 1999 N. Sycamore Avenue in Los Angeles. Follow along on Instagram or visit the website on www.veltree.com and www.thevtreehollywood.com.