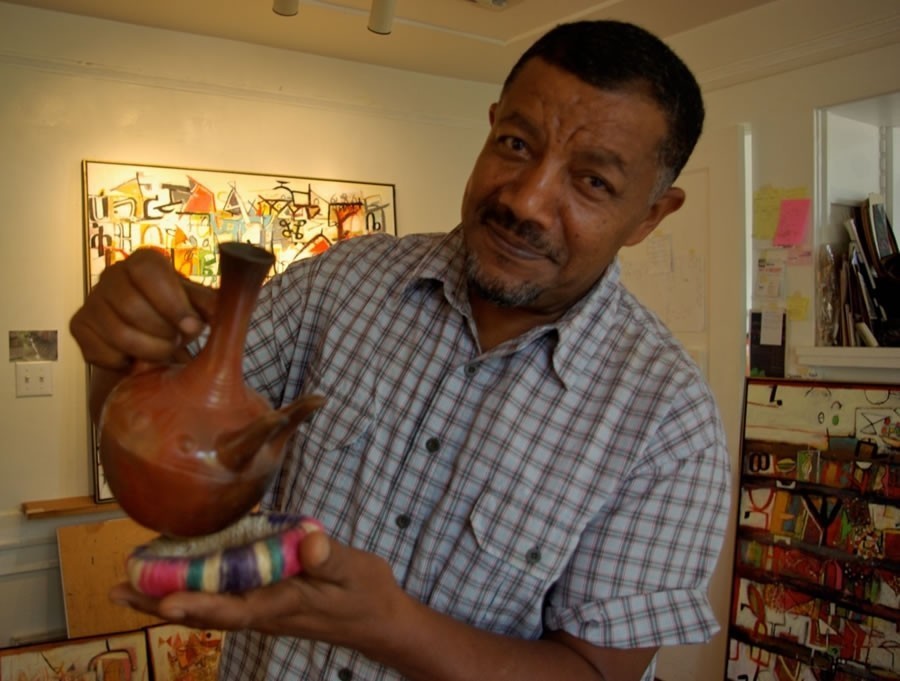 The first clue that something Ethiopian is in the air is the heady aroma of green coffee beans roasting in the oven. Then there’s the small glass vessel, called a berele. It has a spout that forces you to squint heavenward (thinking “thank you, God”) when you glug, you’re meant to make noise, the mead-like honey wine it holds. Near the stove, there’s the tell-tale jar of turmeric-orange berbere, the classic Ethiopian spice blend made from chile peppers, garlic, ginger, dried basil, korarima (Ethiopian cardamom), rue, white pepper, black pepper and fenugreek.

I’m in the kitchen of Wosene Kosrof, an Ethiopian-American artist, in Berkeley. It’s two weeks since Wosene — he typically uses his first name as it is customary in Ethiopia — returned to his California home from Addis Ababa. It is less than 24 hours since his most recent exhibition opened at the Bekris Gallery, an upscale space in downtown San Francisco’s artist’s row.

I am here, amidst paintings in progress and paintings awaiting delivery, to quiz him on Ethiopia’s cuisine and coffee culture. I know that Kosrof most often begins his creative day at a coffee shop, be it in Berkeley or Addis Ababa, where he has a house with a studio and where he likes to live for three months each year for inspiration and to re-root himself in Africa. Ethiopia is known as the birthplace of coffee. They’ve been drinking coffee there since the ninth century when, legend has it, a herder noticed his goats were dancing and intrigued, tried some of the berries they had eaten.

Before joining Kosrof in the kitchen he shares with Patricia diRubbo, his life and business partner, I already know that Ethiopian food is flavorful, textured, visual and aromatic. That spices, ranging from fiery to delicate, are used in combination with fresh herbs. That dishes can be vegetarian or meat-heavy (usually with lamb, beef or chicken). That meals often include breads (variations of injera), stews (known as wats), grains (and legumes) and the spices.

Ethiopia Has Its Injera

Previously at Cafe Colucci, one of Kosrof's favorite East Bay Ethiopian restaurants, we shared kitfo, the Ethiopian version of steak tartare (finely minced lean beef spiced with fresh-ground cardamom in seasoned butter) and injera, the spongy flatbread with its tangy-sour flavor that is an Ethiopian staple. “America has its cheeseburger, Mexico has its tortilla, Ethiopia has the injera,” says Kosrof. Eating with your hands, using injera to transfer selected morsels from plate to mouth, is the custom.

Kosrof, arguably Ethiopia’s best-known living artist, has paintings in the permanent collection at the Smithsonian National Museum of African Art, the National Museum of Ethiopia, the Rockefeller Collection and at the United Nations among many other institutions. If you’re in Northern California’s Bay Area, you can see his work at any of the three Terra Firma galleries.

His work — creative, alive, powerful, complex, sometimes playful and often colorful — has been called “a celebration of Africa’s intellectual and cultural achievements.” He was the first Ethiopian artist to use the written symbols of his native Amharic — Ethiopia’s unique and official language — as the major compositional element in his work, focusing on the beauty, plasticity and communicative potential of the script.

Kosrof will tell you that making art is, in a sense, like cooking. He is creatively inspired by smatterings of everyday life in both the United States and Ethiopia, including the variegated kaleidoscope of the Ethiopian table.

Working as he does with the symbols of Amharic, he says, “I can think that I am chopping up the letters like carrots and assorted vegetables and then putting them on the surface of the canvas. There’s the color of the turmeric. There are the aromas. “Painting is also like cooking in that you have to stop somewhere. When do you sprinkle on the salt and sign your name?”

Describing Ethiopia’s coffee culture, Kosrof says coffee shops abound and life happens in and around them. “You go to the coffee shop for your morning news; your lunch-break news. It’s where communication happens. People spend a great deal of time having coffee.” Yet, people in Ethiopia are calm, hospitable and gentle. There’s no hyper stuff, ” he adds. No caffeine buzz.

Along with the cappuccinos, espressos and Western-influenced cafe culture, at home Ethiopians tend to practice a unique and ritualized coffee ceremony which in form and practice has elements of the famed Japanese tea ceremony.

Typically, says Kosrof, the traditional coffee ceremony begins with a family member or maid washing the green coffee beans by hand then roasting them in a frying pan over charcoal, to which frankincense is added once the beans are removed, placed in a bowl and passed around so that those present, usually seated in a circle, can savor the aroma.

The roasted beans are pounded in a wooden mortar and pestle. The ground coffee is added to water in a small clay coffee pot (like the pot Kosrof is holding in the main photo above) and brought to the boil. When ready, the brew sits for a few seconds. Then it is poured into small cups. “Some people add sugar, some prefer salt, others use refined butter. That’s a preference,” says Kosrof.

He also shares that Ethiopia has a profusion of restaurants. While the food is good in the United States, it is adapted to American tastes. “So it’s better there.”

This suggests we all need to make a trip to Ethiopia to savor the flavors, revel in true African coffee culture, develop a taste for honey wine — and to see Kosrof's art in Ethiopia’s National Museum of Art and the City of Addis Ababa Museum. Good reasons to get up and go.