Sipping in Yorkville with Theopolis Vineyards 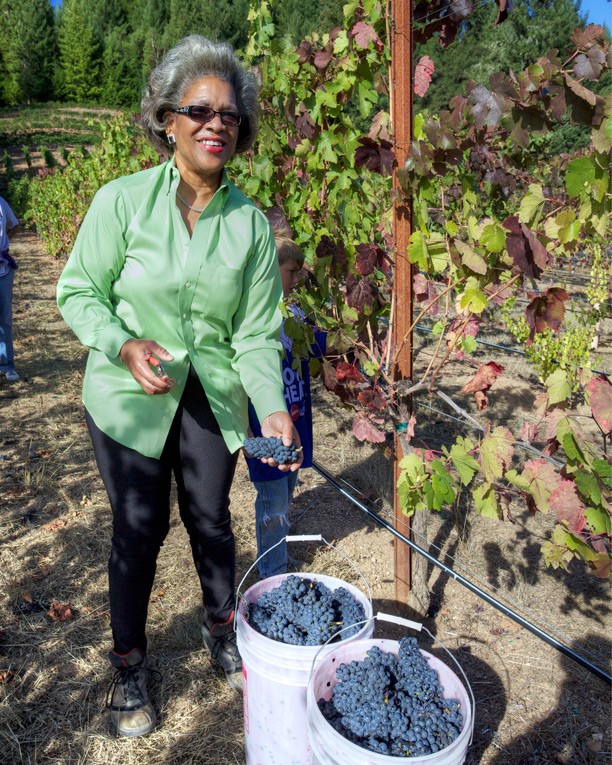 When Theodora Lee received the Greek name Theopolis while pledging the sorority Delta Sigma Theta at Spellman College in the 1980s, she had no idea it would inspire the name of her vineyard, Theopolis Vineyards, located a little over two hours away from San Francisco in the Yorkville Highlands of Anderson Valley.

The Texas native, whose parents own the Dallas Post Tribune, learned to drive at the age of eight on the tractor her father owned on their 10 acres of land in Ellis County. In 2003, she purchased five acres of her own in Yorkville which is along Highway 128 after the recommendation of her mentor and doing some research.

“My dream was to have a vineyard. I figured I grew up having a country place, meaning on the weekend we would go out to the farm as we called it and ride the horses and the tractors.  It was just a part of my life,” says the lawyer who was also inspired by her firm’s partners who have vineyards.  “Farming comes naturally to me. I actually love being out on a tractor.  I love the farm aspect and all of the things that go into farming and being part of the land.”

Lee, who lives in Oakland, says the property is surrounded by fern redwood trees which means the sun is limited and finding the perfect grapes to grow would be key. By nature, Anderson Valley is highly elevated with hot days and cool nights which make it perfect for big and bold reds and Lee’s first grape of choice was petite sirah.  She sources a unique and less available Olmo grape called symphony which is a crossing between the grenache gris and muscat varietals created by viticulturalist Dr. Harold Olmo. Interestingly enough, Olmo has created more than 30 varietals that are grown around the world with his most notable being the ruby cabernet.

The original intent of Theopolis Vineyards was to just grow and sell the grapes, but in 2014, Lee decided to officially bottle and sell the grapes under the vineyard’s name producing 300 cases.  Fully aware that just growing vs. growing, bottling and selling are at the far ends of the spectrum from one another and that her new trajectory involved more due diligence, Lee is excited about the response from restaurants and wine enthusiasts so far.  Sold through her wine club and in select fine dining restaurants, Lee is already looking ahead for 2015 and plans to add two more varietals under her label, a rosé of petite sirah and a pinot noir.  She also wants to eventually get production up to 1000 cases.

Throughout the month of January, Lee and Theopolis Vineyards’ wines will be featured in San Leandro, California at the Vine Wine & Tapas each Sunday beginning January 4.  Wine enthusiasts can enjoy Lee’s wines along with selections from her winemaker for $15 a flight (5 tastings) from 2 – 7 pm.  The restaurant is located at 135 Parrott Street and Lee will personally be there to pour and talk about the wines and being in the wine industry on January, 4, 11, and 25.