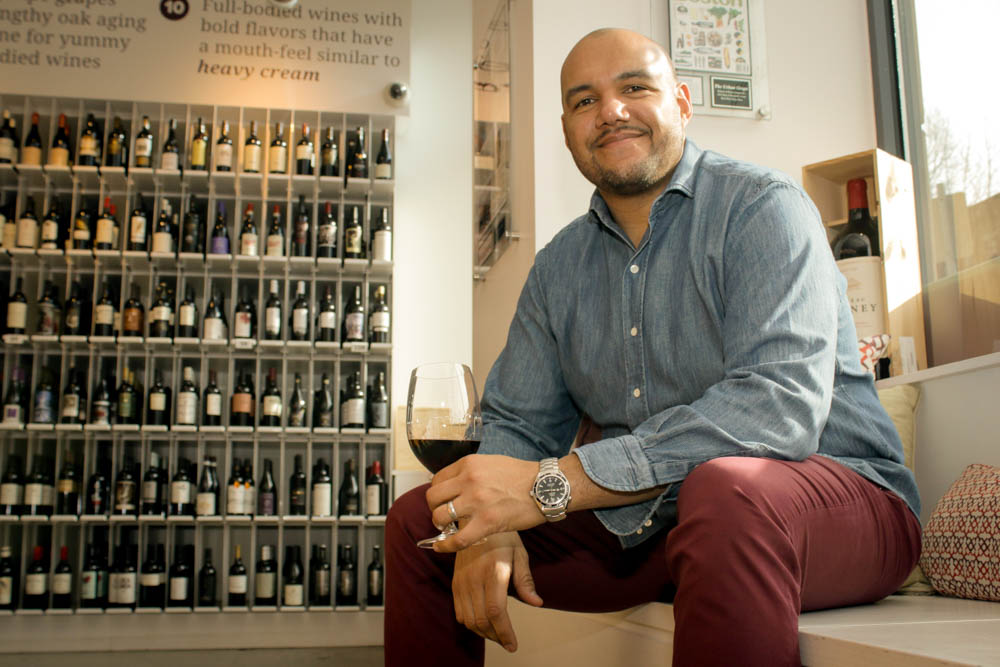 Boston’s premier, award-winning wine, craft beer and spirits shop, Urban Grape, seeks to make wine less intimidating for the average wine drinker.  Located in Boston’s historic South End neighborhood, owners TJ Douglas and his wife Hadley opened the store in 2009 and have since revolutionized wine lists across the city. Douglas’ passion for excellent service and introducing customers to unique wines are what make the Urban Grape an inclusive space.

Douglas moved to Boston, Massachusetts for more opportunities in the restaurant industry after leaving his small town of Bethel, Vt. in 2001. Not too long after settling into Boston, he became a bar manager at a restaurant that had a wine on tap cuvée system. “Here I am, this bar manager who doesn’t know anything about wine. And now we have this wine bar. So that forced me into the wine world,” says Douglas who credits this stint along with his in-laws who are avid Napa cabernet drinkers with broadening his knowledge about wine. Douglas would later use this exposure and his expertise to build a progressive wine drinking community in Boston.

From Humble Beginnings to the Urban Grape

Growing up in public housing in a single-parent home, Douglas’ mother moved her family from Connecticut to Vermont, paying her way through school while raising Douglas. He described his new home as a total culture shock as he was the only Black kid in town. In his late teens, Douglas began work as a dishwasher in a local restaurant which was his first introduction to the industry. He was impressed with the ambiance, warm lighting and décor that made him want that same experience for others, especially his family. “I didn’t grow up with wine on my table,” shares Douglas.  Yet this lack of exposure inspired Douglas to quickly move up the ladder, going from dishwasher to bar manager.

In his more than 18 years of hospitality experience, Douglas credits the various roles he’s held from prep cook, general manager to bar manager at a Todd English restaurant for introducing him to the world of food and wine.

While on a trip to Italy some years ago, he shared an idea with Hadley about his desire to couple his hospitality expertise with his love of wine and translate that into a brick-and-mortar store.  Not long after, Urban Grape became a reality for the wine-loving duo.

On Being Black in the Wine World

The stereotype that unfortunately still exists in today’s society is a false belief that Black people don’t enjoy wine, let alone own wine shops.  Sadly, Douglas has dealt with this in his South End store from customers walking through the door. He shares some are utterly surprised when they discover he, in fact, is the owner and not staff, noting that it happens all the time.  “I like having the opportunity to impress them.”

Douglas is working to change the narrative that Black people not only drink wine, but they also have a market share as distributors, vintners and much more. This type of representation matters to Douglas and his community. In that same vein, Douglas is currently working on creating a list, called Producers of Color, of Black-owned wine producers to become an access point for customers and distributors to have exposure to new brands. “Someday it will have 100 wines in it,” he says.

On any given week at Urban Grape, you will find the local community enjoying free wine tastings as a way to learn about wine. Douglas believes “everyone has the same palate, but different exposure,” which explains his desire for quality customer service. Given his own personal background, Douglas proves you don’t need the pedigree of a sommelier to understand and enjoy wine. In 2017, he wrote Drink Progressively together with his wife which has revolutionized the way many now enjoy wine, focusing more so on the body of the wine rather than the region from which the grapes were grown.

Urban Grape’s approach to making wine more accessible to everyone, no matter the price point, is part of the reason they were voted “Best of Boston” through the years. When you walk into the minimalist-meets-industrial designed store, beautifully curated wines line the shelves, along with a section dedicated to “Staff Picks,” where Urban Grape employees share which labels pique their interest. Douglas’ hospitality expertise shines when he is sharing details about how wine is made, or whether it’s light or full-bodied. He prides himself on helping customers find the perfect bottle of wine—even if you’re not a wine connoisseur.

Urban Affairs, the events arm of Urban Grape features events such as Drink Progressively, Women in Wine and Farm to Bottle are just a few private and semi-private tasting events that keep Urban Grape thriving. They allow Urban Grape clients opportunities to learn about wine more engagingly. “We want to take the intimidation out of wine, out of spirits and say, ‘Hey this is really good, let’s explore.’  We offer free tastings three days a week. These free tastings are for anyone in the community to come by and taste and ask questions, to tell their story to the winemaker,” says Douglas.

Douglas created The Progressive Scale, a system that rates wines by their body on a scale of 1 to 10 with 1 being the lightest-bodied wine and 10 the heaviest. This revolutionary system groups wines together, so readers will find that each section of the book has various kinds of varietals and features wines from different regions. The Progressive Scale system makes it easy to experience the vast world of wine, taking the intimidation out of finding the perfect bottle. “I’ve always been the wine person who will talk about wine, “geek out” about wine and [Hadley] will take what I’ve said and make it shorter, sweeter, maybe a little more user-friendly sometimes and that’s what drink progressively is.  It’s 100% my information and 100% of her writing, so we feel that our concept is revolutionary in the wine world and really helps take the blinders off and make wine inclusive which is very important to us.”