Chef Armani Johnson Takes on Change and Challenge at ABC Pony in D.C. 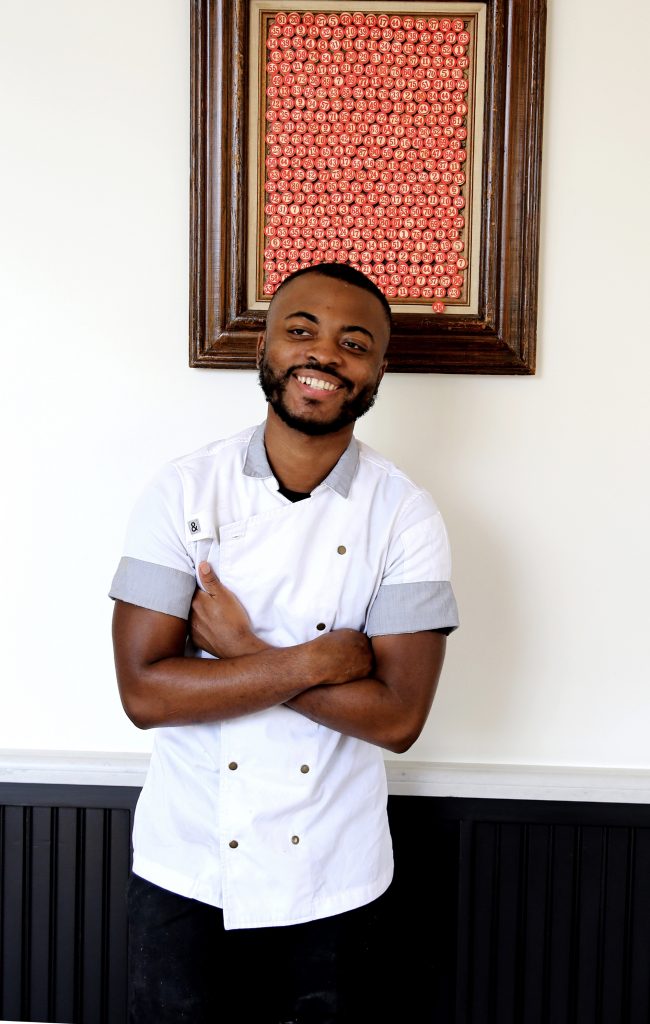 A child who chooses to play with pots and pans instead of toys might be destined to become a chef. It takes much more than a natural-born attraction to cooking to be chosen as the 2020 Rising Star of the Year by Esquire Magazine’s top food critic.

“It definitely gave me a lot of confidence being noticed in that way. When he came here to the restaurant, it was just supposed to be like a fun thing. I didn’t expect anything from meeting him. Then that happened, and it blew me away,” says Armani Johnson, executive chef of ABC Pony in Washington, D.C.

Year of Change and Challenge

Johnson took over the kitchen at ABC Pony in July of last year. It took courage to accept his first executive chef position during the COVID pandemic. He went from a sous chef assisting in the preparation of the restaurant’s popular dishes to leading a skeleton staff trying to help Erik Bruner-Yang’s café stay open. “We opened in December of 2019, a couple months before the pandemic hit hard. Throughout the pandemic, we were just surviving,” the chef says.

Survival meant letting go of the crab dip, doughnuts and other dishes that put ABC Pony on Washingtonian Magazine’s 2020 list of 100 Very Best Restaurants. The popular lumpia is still on the menu, but the D.C. eatery became primarily a takeout burger place. “People can get their food and eat in, but there’s no table service,” adds Johnson.

ABC Pony has no outdoor space but does offer indoor counter service where customers can order and sit where they like. A Something Fun Supper Club with a five-course seated dinner series is available three nights a week.

It is a constant challenge to find and keep reliable staff to keep up with the takeout and delivery orders and serve the dine-in guests. “In these times, a restaurant kind of shows what it is able to do for employees. Some people take it as ‘I’m going to look out for me,’ and that’s not wrong. It’s just that I get the short-end of the stick because I’m there, and the job has to be done,” says the chef.

It is a job Johnson values, even if it means flipping burgers all weekend. He started working with the Bruner-Yang team in the summer of 2019. At that time, ABC Pony was an Italian and Asian pasta shop inspired by the pop culture of the late 80s and early 90s. The coronavirus changed the focus from a restaurant packed every night with daily dinner specials to one of survival. “We’re still in survival mode. We need money more than we need creativity, so it’s hard to balance. For the last six or seven months, I’ve been cooking burgers,” he says.

The southeast D.C. café, open Tuesday through Saturday, offers a different pasta dish every week as part of the three-night-a-week dinner series.  The dinners give Johnson, a graduate of the International Culinary School at the Art Institute of Washington, a chance to create more than burgers. “As a chef, I feel that need to want to create,” he says. “It’s kind of stressful because that’s where I get my feels, that’s when I feel motivated when I’m creating and know I can be innovative and do different things.”

Chef Johnson recognized early on that working with Bruner-Yang could broaden his culinary experience and exposure. “As I started working with him, I realized it would be some good opportunities considering how busy Erik is and all the things he has going on. I kind of like that vibe and that energy of staying busy and always moving around.”

ABC Pony’s owner gave his new executive chef advice on menu planning. “It’s something really simple, but I still think about it when I’m composing dishes. He just told me to cook food that you will be able to explain to people as to why you made it,” says Johnson.

Later Bruner-Yang gave him valuable tips on managing the restaurant’s staff. “He gave me some core things to go by, like just being consistent and learning how to manage the various types of people I’m dealing with. He mentioned things like body language, trying to smile more and other little things I can work on.”

Johnson started cooking as soon as he was tall enough to see over the kitchen counter. When he was old enough to handle a knife, he made French fries, one of his favorite things to eat. Cooking came naturally to him, and now the chef wants to use his skills to help ABC Pony move in a new direction. “We’ve been doing these dinner series where we’re able to press ourselves a little bit. We have items that we like a lot. If we were to open tomorrow, our favorite items would be a really solid menu,” he says.

The 28-year-old chef grew up in Prince George’s County, a suburb of D.C., eating soul food and American takeout. One of the dinners he created for the supper club was whole fried quail stuffed with dirty rice served with braised collard greens. “I like to look at the dinner series as a way for me to find the path to my way of cooking. “I guess I have a skill set as far as pastry, bread and pasta. I have an arsenal of skills. I’m just trying to figure out the best place to hone in and create what I feel like is my food,” Johnson explains.

His food is an extension of who Johnson is and what he likes to cook. Leading the ABC Pony team provides a platform for the chef to develop his own culinary point of view. “I have everything I need to do it. It’s just either cooking enough for it to develop on its own or just trying to figure out what that looks like for me.”

Creating new dishes motivates Johnson to keep learning. “I think doing the dinner series is helpful for that because when I’m putting together things I've never done before and they come out good. I feel like I’m headed in the right direction.”

That also means embracing a new level of recognition that Black chefs are receiving for their contributions to American food history. “It’s necessary because I feel we are a credit in all industries. It’s gotten to the point that we want to be noticed for these great things that we do too.”

Johnson is glad to see Black chefs celebrating our heritage and not being afraid to cook dishes that evolve from our culinary traditions. “If I make macaroni and cheese, somebody will say, ‘Oh, he’s like all the other Black chefs. If a white chef makes macaroni and cheese, he’s praised for it,” says Johnson. “It sucks, but I think the world is finally getting tired of it. Black chefs are stepping up, telling their stories, telling their truths, and cooking the food that resonates with them.”

Finding Joy in the Journey

As a Black chef taking charge of his own destiny, Johnson offers solid advice for other culinary hopefuls. “Stay focused on your purpose, learn skills and find someone who can mentor you. Go home, look at videos, read books and talk to your friends. You’re only going to attract what you put out.”

The D.C. chef also suggests that young people wanting to succeed in the hospitality field get ready to miss out on some fun to put more time into productive work. “It’s putting that work in for yourself so that when you get to a point where you are ready, or someone feels that you are ready, you’ll get the same opportunity too.”

Johnson has no idea what the future will bring, especially with the pandemic’s ongoing impact on the restaurant industry. That does not stop him from finding joy in cooking and the company he keeps. “My girlfriend is always happy because I cook all the time. Honestly, I like the community. A lot of the opportunities that came my way came from other chefs pointing people in my direction. I’m very grateful for that,” he says.

So, for now, Johnson is staying true to himself, working overtime and appreciating anything that pushes him toward growth, including the camaraderie and support he gets from the cooking community. “You don’t have to wake up one day and be perfect. People respect the journey, and most people are happy to go on the journey with you.”

ABC Pony’s executive chef sees the evidence of that after a year of critical acclaim and coronavirus challenges. “There are many people on this journey with me, supporting me. They are excited for me. They’re happy for me. It brought tears to my eyes the level of support I got.”