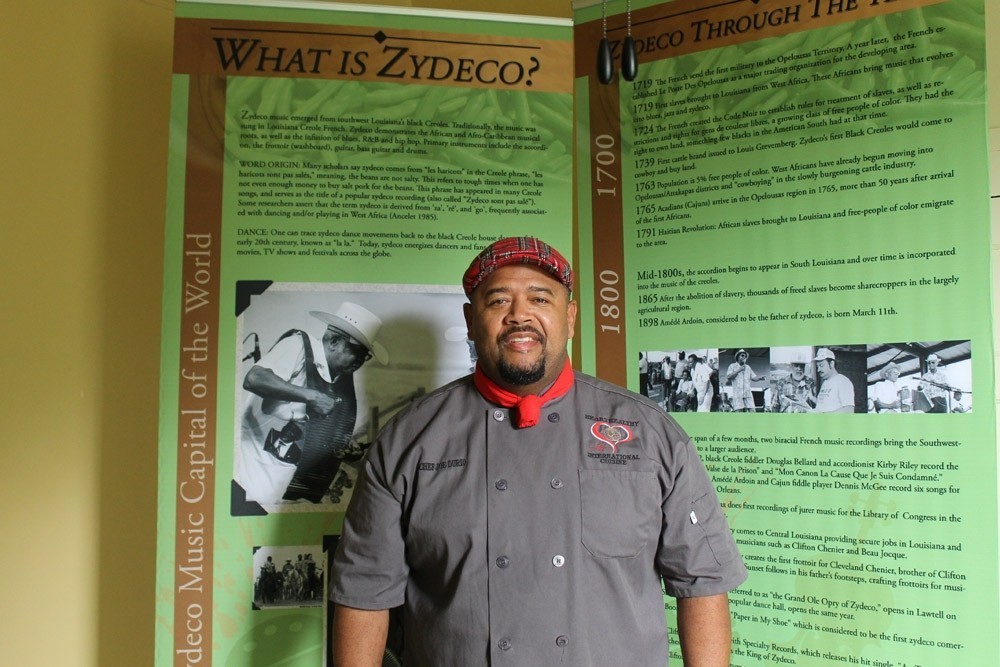 After hearing his story, one can quickly see that Joe Durio is not your typical chef. The barber turned culinary ambassador, healthy living advocate, restaurateur, Unsung Hero Award recipient and owner of the first minority-owned food service company in the states of Louisiana and Mississippi has truly turned his passion for food into an international brand that will make its Bay Area debut at the Creole United Festival on Saturday, October 17 in Sausalito.

The youngest of 17 children, Durio was born in Lafayette, Louisiana and between Palmetto and New Orleans. His grandmother was his culinary mentor teaching him how to make things such as smothered okra, classic Creole and seafood dishes and gumbo. “Growing up, I always had a passion for helping out in the kitchen and making sure everything was prepped for my grandmother who raised me,” says Durio whose gumbo has been featured in 19 countries. “She didn’t have a lot to work with but she worked miracles with what she had.”

Although he had a passion for the kitchen, a career in there wasn’t something the Southern University student thought about when majoring in business. An entrepreneur since the eighth grade, he began cutting classmates’ hair before adding his teachers, principal and superintendent while in high school to his clientele list. He opened a barbershop in New Orleans at the age of 17 which paid for his way through college and boasted one of the biggest clientele in the city.

A trip to visit his uncle who retired from cooking in the military and living in Germany ignited his interest in being a chef and set him on the trajectory of being the international culinary star that he is today. While there, he received his formal culinary training at the Johnz School of Culinary Arts in Frankfurt where he currently co-owns the restaurant, The Spirit of New Orleans.

Today, Durio’s culinary talents are highly sought-after with a growing clientele roster that includes NBA, NFL and NCAA players and other sports figures as well as a host of politicians, celebrities and entertainers.

The picky eater who doesn’t eat seafood has always taken a healthier approach to cooking since he was young after seeing friends and family suffer from chronic diseases such as high blood pressure and diabetes that often resulted from an unhealthy diet. “I grew up seeing family and friends suffer from the different complications. So my passion from a young teenager was to try to break the cycle by finding some type of way to make Louisiana-style dishes taste good without using the traditional products,” says Durio who has been criticized by family members for his desire to cook and eat healthier and encouraging others to do so.

In 2005, Durio found himself putting his life and business back together after Hurricane Katrina devastated the city of New Orleans causing him to lose everything. “I was empty inside and couldn’t believe I lost everything in one day,” says Durio who was a newlywed at the time. For the next 15 months, he would cook for those on the frontline working to help a city in need; police officers, paramedics, doctors, nurses, American Red Cross workers, the National Guard and volunteers. They saw someone who sacrificed his own time and life to help others but little did they know this was the therapy he needed to get through such a catastrophic event. “I was using their energy for me to work off of because I lost everything and I just got married a month and a half before.”  It was the only way he knew how to keep his sanity.

His service would not go unnoticed and in 2006 both the city of New Orleans and the state of Louisiana presented him with the Chef of the Year award. The ultimate recognition came last year when he was presented with the Unsung Hero Award from President Obama and the U.S. Congress. He is the first chef to ever receive this award.

After working hard to rebuild, life is back on track for Durio. His latest business venture includes his food service company, Heart Healthy International Cuisine, which provides more than 150 products that are USDA certified and FDA approved to restaurants, schools, businesses and other organizations looking to offer healthy options that are ready to serve.

At the recommendation of his friend, Pearl Kennedy who owns Ms. Pearl’s Louisiana Bread Pudding in Oakland, Durio is set to make his Bay Area debut at the 3rd Annual Creole United Festival hosted by Grammy-nominated artist Andre Thierry as a featured vendor. A preview into the menu reveals a true taste of Louisiana as only Durio can dish up and includes seafood gumbo with shrimp, crabmeat and Creole okra in a brown savory roux over rice.  Then there is the chicken and turkey sausage gumbo in a savory roux with a blend of Creole herbs and spices. Or maybe you’ll go for the crawfish corn pepper soup with Louisiana crawfish tails, creamed and whole kernel corn and a blend of red and green bell peppers with spices.

Those reserving a seat or table in the “Taste the South” waterfront area will be treated to Durio’s award-winning New Orleans-style smothered okra made with shrimp, crab meat, boneless chicken, turkey sausage in a Creole tomato base with herbs and spices served over rice.