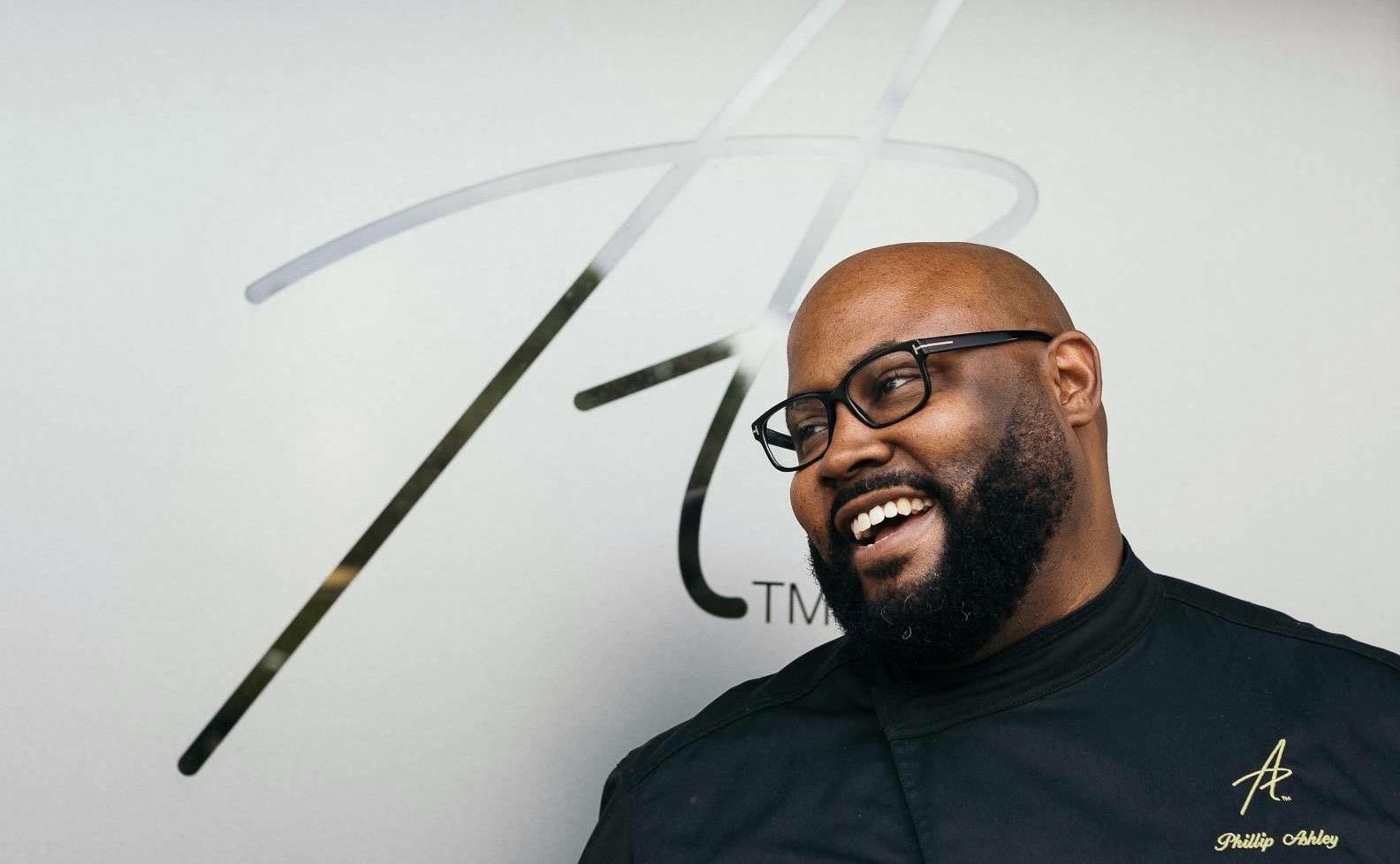 Thousands of entrepreneurs across America were blindsided when the novel coronavirus began spreading around the world. Restaurants and food shops closed to indoor service, customers canceled orders and hospitality workers lost jobs. “It is different than anything else and essentially more devastating because the whole world basically shut down,” says designer chocolatier Phillip Ashley.

The chocolate boutique the chef owns could no longer welcome customers at the expanded location Ashley moved into in 2019, six years after opening his shop in Memphis, Tennessee.  The situation called for quick thinking and flexibility. “I tell people to think of the word pivot. It means really being mindful of all that is going on and how to adjust,” Ashley says.

The chocolatier believes the key for any business owner is knowing how to adapt in a crisis and maneuver out of whatever happens. Ashley and his team switched focus to virtual presentations and online sales to serve their international clientele and attract new customers. “Right now, we’re only doing sales online. We ship across the country. We’ve even done international shipping,” says the chocolatier. “We deliver locally and now we have curbside pick-up.

Phillip Ashley Chocolates had become a Memphis favorite and attracted worldwide recognition for hand-crafted, artisan chocolates before the COVID-19 pandemic struck. The chef whom Forbes magazine dubbed “The Real-Life Willy Wonka” saw business orders vanish. He could no longer welcome customers into the store to see and taste his unique creations. “We thought, let’s just make it a digital thing. That way, we can reach people from around the country. We’ll send them chocolates, pair it with wine or something like that.”

The shop sponsored its 12th virtual tasting tour the first week of June. Ashley reduced his staff to four people and increased safety measures. Still, the creativity of his chocolates remained constant. One of the virtual tours he offered on Zoom took 40 people on a Taste of New York inspired by popular NYC staples. “I created a Junior’s cheesecake chocolate and a sweet potato bread pudding chocolate which is one of the desserts at Red Rooster Harlem,” says the chef. “I always have a DJ. We paired each chocolate with a playlist and we did Broadway show tunes.”

The featured six-piece box of chocolates and the paired wine are shipped in advance to participants who purchase the virtual tasting tour experience priced at $50. The live tasting for two is $80. “I like doing those virtual or live in-person demos or cooking things because it gives me another opportunity to talk, for one. Then two, I like to create things with food, chocolate, wine and whiskeys,” Ashley says.

Starting July 3, Phillip Ashley Chocolates will host virtual tastings every two weeks. The chef’s goal is to present authentic experiences in a live environment to showcase the stories behind his creations. The Zoom get-together on Friday, June 19, will celebrate chocolates made with one of Ashley’s favorite whiskeys, Uncle Nearest. “I was just thinking about Uncle Nearest and thinking about what I can do with the whiskey. I went online again and watched some of the videos they had on their website and read more about it.”

Ashley then created chocolates representing the story of Uncle Nearest, a highly praised whiskey distillery founded by Fawn Weaver, the first woman and first person of color to run a major spirits company. The whiskey produced at a 270-acre distillery in Tennessee pays tribute to Nathan “Nearest” Green. The slave and first known Black American master distiller taught Jack Daniel how to make whiskey. The premium whiskey named for him has won more than 75 awards, including “World’s Best” at the 2019 World Whiskies Awards. “They have a fun product, an excellent one and that is something I enjoy. We’ve made several products using their whiskey,” Ashley says.

One of the Uncle Nearest chocolates contains the whiskey made from sugar maple trees and black charcoal salt. “Uncle Nearest Green created the Lincoln County process that filters whiskey through charcoal, which separates Tennessee whiskey from Kentucky bourbon,” says Ashley. He demonstrated how he makes dark chocolate truffles with the whiskey live on Uncle Nearest’s Facebook page last month.

Other popular chocolates made by Ashley also reflect the research he puts into designing a new offering, whether the idea is sparked by a person, place or thing. The French blue cheese chocolate represents a French cheese region named Savoy and a 1968 Beatles tune called “Savoy Truffle.” George Harrison wrote the song about Eric Clapton’s love for chocolate. “Collectively, all this data I get paired with my imagination paired is where I come up with them. Ultimately, what I say is every chocolate should tell a story, and I’m constantly trying to tell a new story,” says Ashley.

As a child, the chocolatier spent a lot of time daydreaming and he still does. “I cook something or make something in my head 30 to 40 times before I make I ever make it in reality.” Ashley compares it to playing chess and figuring out the outcomes with each move. The process sometimes makes production hectic, such as when he took months to finalize his idea for the “I Am a Woman Collection,” created for Women’s History Month in March. He based the collection on 24 women trailblazers or torchbearers who have demonstrated courage, tenacity and legacy through their work. “By the time I finished thinking about it, I literally had a week to get together models, photography and makeup to do the campaign.”

Chef Ashley let his imagination go big in another creation popular with customers. He supersized the turtle. Each of his chocolate, pecan and caramel turtles is four ounces of the familiar and unusual. “We have milk chocolate pecan, flan chocolate whiskey, whiskey pecan, dark chocolate cashew and white chocolate macadamia,” says the chocolate maverick. “We make our own caramel and we use the best nuts and the best chocolate.”

The Memphis entrepreneur learned a lot about quality from his mother. She used to bring home Godiva chocolates for her children to taste and made chocolate chip cookies for special occasions. Naturally, Ashley grew up loving chocolate. He remembers reading “Charlie and the Chocolate Factory in school and later seeing the Gene Wilder movie, “Willy Wonka and the Chocolate Factory.” The bread crumbs laid in childhood eventually led him from a corporate sales career to his passion, making chocolates. “One day that inspiration hit and it ended up being the thing that became an obsession. I didn’t go to culinary school for chocolate, but I was so moved and determined,” Ashley says.

Being a Chocolate Maverick

Ashley has mastered the craft since the night he woke up with the idea of becoming a chocolatier 13 years ago. He hosted the Taste of the Delta at the James Beard House in New York City. His creations were the official chocolates at the Grammy and Oscar ceremonies in 2016. “I kind of looked at it as a new frontier and a challenge that I wanted to take on. I thought chocolate was cool to work with because if I could create the things in my head and make them come into reality, we’d be able to do some really cool stuff.”

As a self-taught maverick, Ashley read, researched and practiced extensively to learn the rules so he could break them. He chose not to attend culinary school because he wanted to focus strictly on making chocolates, not becoming a pastry chef. “As I became skilled at it, I then let my imagination go. That’s where breaking the rules come in. I want to put blue cheese in chocolate. I want to make a barbecue chocolate. I want to be able to turn anything that you can imagine into real live chocolate that not only sounds intriguing but tastes amazing,” the chocolatier says.

Today, Phillip Ashley Chocolates are enjoyed by people around the world. The hand-crafted blends are made from the finest fair-trade chocolate from Africa, the Caribbean and other top-quality producers. The focus is on seasonal and natural ingredients. “We’re not saving the world. We’re just making it taste better one chocolate at a time,” Ashley says.

The chef’s chocolates are made without artificial preservatives, so the shelf life is shorter than many mass-produced products.  Ashley gained expertise in consumer packaging while in the corporate arena. It helped him work out how to ship perishable chocolates anywhere in the world. “We do as much as we can to ensure that 365 days of the year you receive chocolates, they look amazing and taste amazing.” Ashley’s team uses insulated specialized packaging. Gel ice packs keep the chocolates from melting and prevent moisture damage from condensation.

Ashley’s high-profile clientele includes FedEx, Horchow and Disney. The Memphis shop can customize chocolates with a logo and handle corporate gifting. “If a company needs to send 500 boxes around the country or the world, we literally tell them to send us the spreadsheet of all the addresses and which chocolates and we do the rest,” the chef says.

Some celebrities, including Stevie Wonder and Serena Williams, have bought Ashley’s designer chocolates as gifts. You can buy a box of five or six chocolates or purchase a 24-piece signature collection. Prices range from about $25 to $79. “Whether buying for yourself or others, these are perfect gifts and amazing indulgences,” says Ashley.

The reopening of Phillip Ashley Chocolates at 1200 Madison Avenue in Memphis is not likely to happen anytime soon. Walk-in customers might be welcomed back by the Thanksgiving or Christmas holidays. In the meantime, Ashley can daydream about the future. He would like to redeem his second-place finish on Food Network’s “Chopped Sweets.” He lost to pastry chef Amber Croom, also featured in Cuisine Noir. “I’m totally happy for her, but I hate losing,” says Ashley. “I’d definitely do that or something like it again. It was super rewarding. The exposure that came from it is amazing.”

Ashley hopes the virtual tasting tours and online sales will expand his brand so that his company can make a more significant impact with chocolate. He plans to host pop-ups shops and markets across the country. They will feature chocolates that tell the stories of Los Angeles, Seattle and other cities. An even broader vision involves becoming a chocolate manufacturer with the power to celebrate and amplify the blackness of chocolate. “The world enjoys this product that by and large people of color have a great deal to do with, but in a lot of cases don’t get the recognition, the money or the fair market value.”

For now, the Memphis chocolatier will concentrate on the online sales of his designer chocolates. He wants more people in the U.S. and other countries to enjoy his unique creations while they wait for the pandemic to end. “That’s the main thing is to survive. Those that can survive the impact, however long it lasts, will likely come out on the other side of this, and even thrive.”