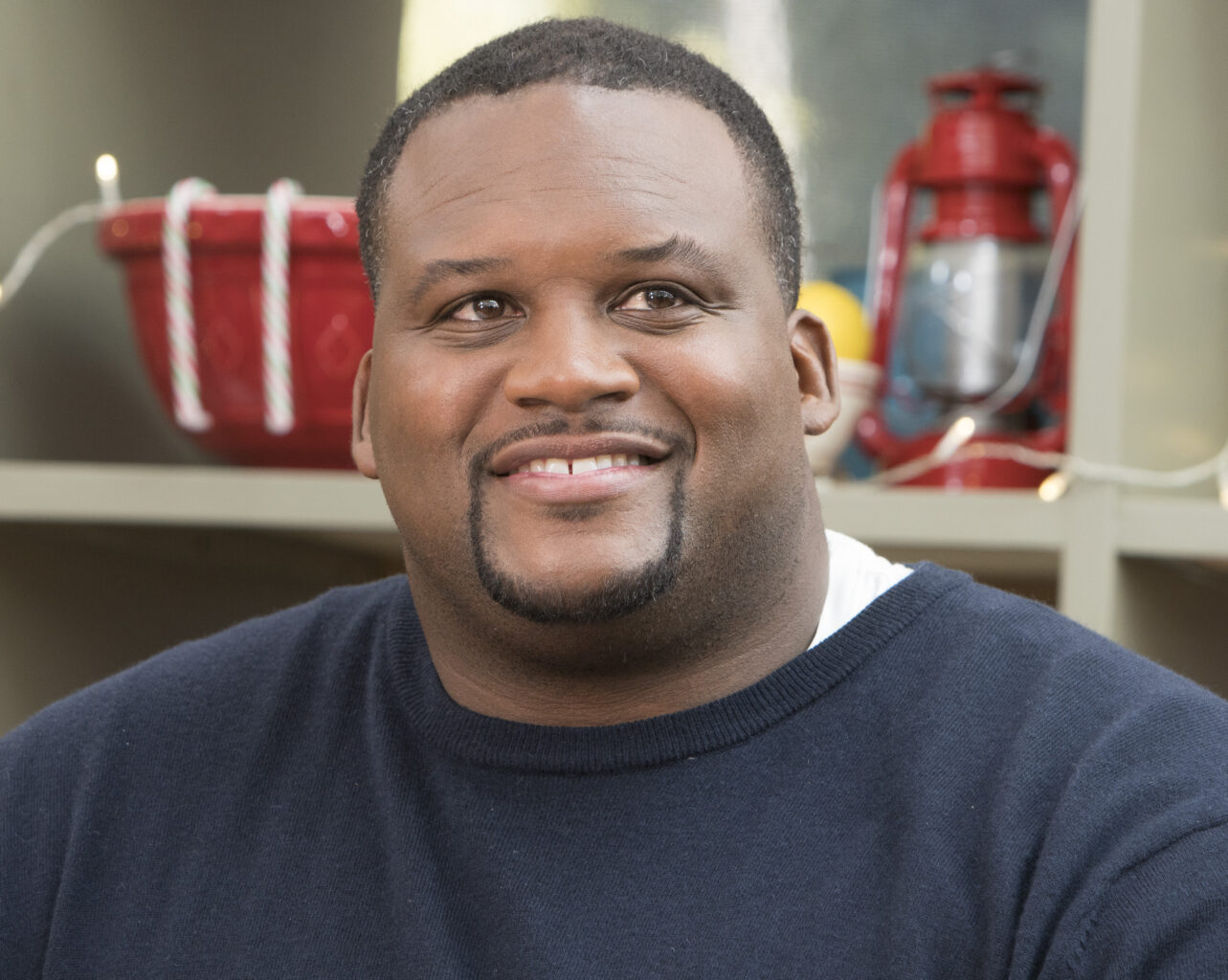 Laughter is the best medicine. That’s no secret to Detroit, Michigan native, Anthony “Spice” Adams, who is reinventing himself as a comedian whose brand of family-friendly videos have gone viral on every corner of the internet. Whether it’s a sketch comedy segment of his Cream E. Biggums character or his Oldhead persona, this retired NFL defensive tackle is embracing the entertainment bug he has had since childhood.

“I was born and raised in Detroit, Mich. I grew up in a single-parent home. My mom saw a talent I didn’t see and she said, ‘I think you can play some football,’” says Adams. At the age of 14, Adams passed a test that got him a spot at one of the top schools in Detroit and started playing football with encouragement from his mom. “She just dropped me off at Martin Luther King High School. She told me to introduce myself to the head coach and I’ve been playing for 18 years. You know, high school, college and then pros.” Adams played nine seasons in the NFL. “Turns out mom knows best,” laughs Adams.

He loved competing and the friendships that being a student-athlete afforded. “We started doing everything in unison. Everybody doing jumping jacks and push-ups and I liked that. I didn’t have any brothers and sisters, so I felt like everybody there was my brother.”

After high school, Adams received a scholarship to attend Penn State University. “My goal was to compete and be the best at my position. And by the time my junior year rolled around, I really started taking it seriously.” Adams was drafted in the second round of the 2003 NFL Draft. He went on to play for the San Francisco 49ers for four years and later the Chicago Bears for five years. He retired in 2013.

Life After the NFL

Adams is frank about what he anticipated life to be like after the NFL. “It’s hard. You go from having 70,000 people scream [your name] and being on a set schedule… to having no schedule at all and not having people scream your name. It’s very difficult.” He admits being fiscally responsible post the NFL helped buy him time to figure out his next move. “You gotta find your way fast. And you have to be smart with your money [and] be able to pay your bills for one to two years.” The husband and father of four (one son and three daughters) understands the urgency of providing for his family. “I have immediate mouths to feed every day. You gotta figure it out quick. I gotta make some moves and I gotta make something happen.”

Adams started his production company, No Plan Production, as an homage to not having a plan post his retirement from the NFL. “I had no plan. I literally just started a production company called No Plan based off of what happened to me when I was done. I was solely focusing on football.” To fill that void, Adams started creating videos and posting them online. Soon major brands approached him to host shows and TV segments. “I figured out I’m back in my wheelhouse with entertainment,” says Adams.

When Adams suits up in the various comedic personas he’s created, or is acting alongside Dwayne “The Rock” Johnson in “Ballers,” or filming a segment of “The Great American Baking Show,” he is living out a childhood dream of being an entertainer. His comedic talent has landed partnerships with major brands such as Gillette, Mountain Dew and State Farm. He is currently in his seventh season as co-host of “Inside the Bears,” a sports-themed program by the Chicago Bears.

From No Plan to Co-Hosting

Adams was in Los Angeles, California on a project with the Espy Awards and took advantage of the opportunity to meet with ABC executives from “The Great American Baking Show.” The meeting was serendipitous. “All of that was timing. Being at the right place at the right time.” After filming content for an Italian restaurant, Adams was connected to executives for an audition to co-host the reality holiday baking show in 2017. “ I didn’t believe it was real until I got the plane ticket. I was like, ‘Oh my God, this is really happening.’ It was crazy how everything happened so fast.” To add icing on the cake, his co-host for the first year he was on the show was Ayesha Curry.

He shares that his knowledge around baking has grown since joining as a co-host for the past three seasons.  “When they are making meringues, macarons and they are talking about the French method. I’m learning too. I’m like, put it in the oven put it on 350, put some sugar and butter on it. If it’s anything more than that, I can’t do it. That’s my recipe for everything—sugar, butter, 350 degrees. That’s it,” laughs Adams.

Now the entertainer and co-host jokingly adds baker to his title as well. “I bake like two or three things or whatever recipe my mom gives me. Right now, from scratch I can make a red velvet cake, banana pudding and my mom just taught me how to make this really quick peach cobbler that the kids just demolish. I get like a taste test, that’s all I get. It’s gone.” Adams admits his strong suit is grilling. “I am more of a griller. I grill ribs, chicken, hot dogs and burgers, that’s really what I do.”

The conversation naturally moves towards the impact of COVID-19 and how everything has “shifted” in the world. “It took a pandemic to see the pandemic. The real pandemic,” says Adams speaking to the two pandemics affecting the Black community. In a very sobering tone, the inflection in Adams’ voice signals his frustration and disbelief by the sudden awareness of racism made clear by the steady protests and how it is perpetuated in many areas of American life. The silence was palpable. “It took a pandemic for people to see the racism. Because you can no longer say, ‘Oh, I didn’t see the video. Oh, I’m gonna get to the video when I can.’ In the midst of the pandemic, everybody saw it. You got nothing to do but to watch the news or watch Instagram or wherever you get your information from. It took a pandemic for people to sit down and actually see the hate that’s involved in America.” The funnyman still found a reason to lighten the mood. “Yeah, we gon’ have church today. We gon’ have church today, Margo,” laughs Adams.

Adams is very proud to stand in solidarity with Black Lives Matter as a way to bring awareness to the systemic injustices faced by the Black community. “I thought going to downtown Chicago felt like Million Man March. It was great to see all my people come together for George Floyd and against police brutality. It was powerful to see everybody come together and stand for Black Lives Matter.” Adams is determined to keep the momentum going by participating in peaceful protests within his community.

A Plan for the Future

Adams is keeping his options open and committed to producing more comedic content under the Spice Adams brand. “That’s the beauty of what I do; I really don’t know. Most of the stuff is really spontaneous, like dealing with a lot of brands. You never know who’s watching.” His focus on creating quality content has paid off in the form of partnerships with major brands. “I didn’t know that Mountain Dew was going to call me last year to do something with Cream Biggums that was going to be involved with the NBA All-Star. I work with a lot of different brands: Fruit by the Foot, Kellogg, Mountain Dew and Sprint. They see that my videos are office-friendly and very kid-friendly and really relatable. I am open to a lot of different things and I just want to challenge myself and see where No Plans Production can go. I’m excited.”

Keep up with Anthony “Spice” Adams and all his comedic shenanigans on Facebook and Instagram. You can also visit his YouTube channel for more laughs and find out what he is doing next at www.spiceadams.com.