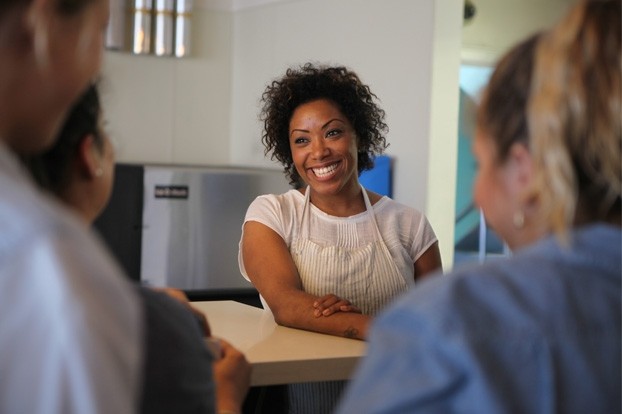 In a business that often breeds harshness and arrogance in the kitchen, chef Nyesha Arrington thrives on positivity and harmony. With an infectious smile – and she smiles a lot – Arrington is a woman balancing the world of celebrity chefdom and a low-key lifestyle; she lives by the beach. With the help of her partners Kristian and Breegan Vallas, the Los Angeles native recently opened up her first restaurant LEONA in Venice, Calif. to rave reviews. Described as progressive California cuisine, Arrington shops the local farmer’s market three times a week to create a diverse, seasonal menu that is a reflection of the chef’s past culinary experience as well as her multicultural upbringing.

“My grandmother met my grandfather during the Korean War and after the war was over she came back here with him.” Her Korean grandmother cooked traditional, authentic dishes that would help develop her palate from childhood and inspire a few plates on LEONA’s menu including bulgogi braised short ribs, lamb belly wontons and Al-Soon broccolini, a nod to her grandmother’s name. Other items on the menu reflect Arrington’s refined culinary background.

With a leader who exudes great passion for her craft, it’s not difficult to see why the staff at her restaurant seems to have much love for the chef and the food as well. Chef Arrington loved having a diverse culinary experience as a child. “My Korean grandmother was my biggest culinary influence. Growing up, my mom made watered-down versions of her food. My dad is from the South. We would go to his sister’s house and eat tacos, soul food, and gumbo. And my dad cooked too. He claimed he made the best spaghetti sauce.”

This artsy, skateboarding chef loves leeks, dumplings, breakfast for dinner and kimchi. She says the secret to making good kimchi is a raw oyster. “Just one oyster makes a big flavor difference.” Arrington has an arsenal full of ideas and recipes waiting to be unleashed and placed on the menu at LEONA. Balancing a respect for classical French technique and a dedication to global inspiration, she is happy and humble. “I don’t know what I did in my life to deserve this but I am in a good place. In my wildest dreams, this restaurant is because of my partners, my location and my food.”

Chef Arrington is not a stranger to television and has been on several food-related shows. While competing on Bravo’s “Top Chef: Texas,” she realized she was not a fan of the manipulation and chaos of reality television. She also competed on the Food Network’s series, “Chef Hunter” and won the top honor on Esquire Network’s “Knife Fight.”

When asked where she sees herself in five years, she took a moment to reflect on her past career and her future endeavors. “I want to Oprah-size the culinary industry.” What does that mean you may ask? It means branding herself to build a dynasty and a long legacy in the food world such as Oprah Winfrey has done with media. “Honestly, I have been in this industry for fifteen years. What I bring is value, meticulous thought and love. I worked under chefs with a hard-fisted rule and the kitchens thrived under love. I want to do it all.”

With the passion and commitment she has to her craft, and that million-dollar smile, Arrington is a rare find. In addition to already being a great role model as a chef, she is on the path to being a trailblazer for black women in all aspects of the culinary industry.

You can also visit the website at www.leonavenice.com.  LEONA is located at 123 Washington Blvd., Venice, CA 90291.

Lee’s Kitchen: A Jamaican Comfort Combo We Can Get Behind
A Culinary Jaunt Through Santa Barbara

Tracey is a Los Angeles native and professional chef. She is currently creating, testing and editing recipes for Breville Inc. along with teaching cooking classes, catering and getting inspired by the delicious life surrounding her.