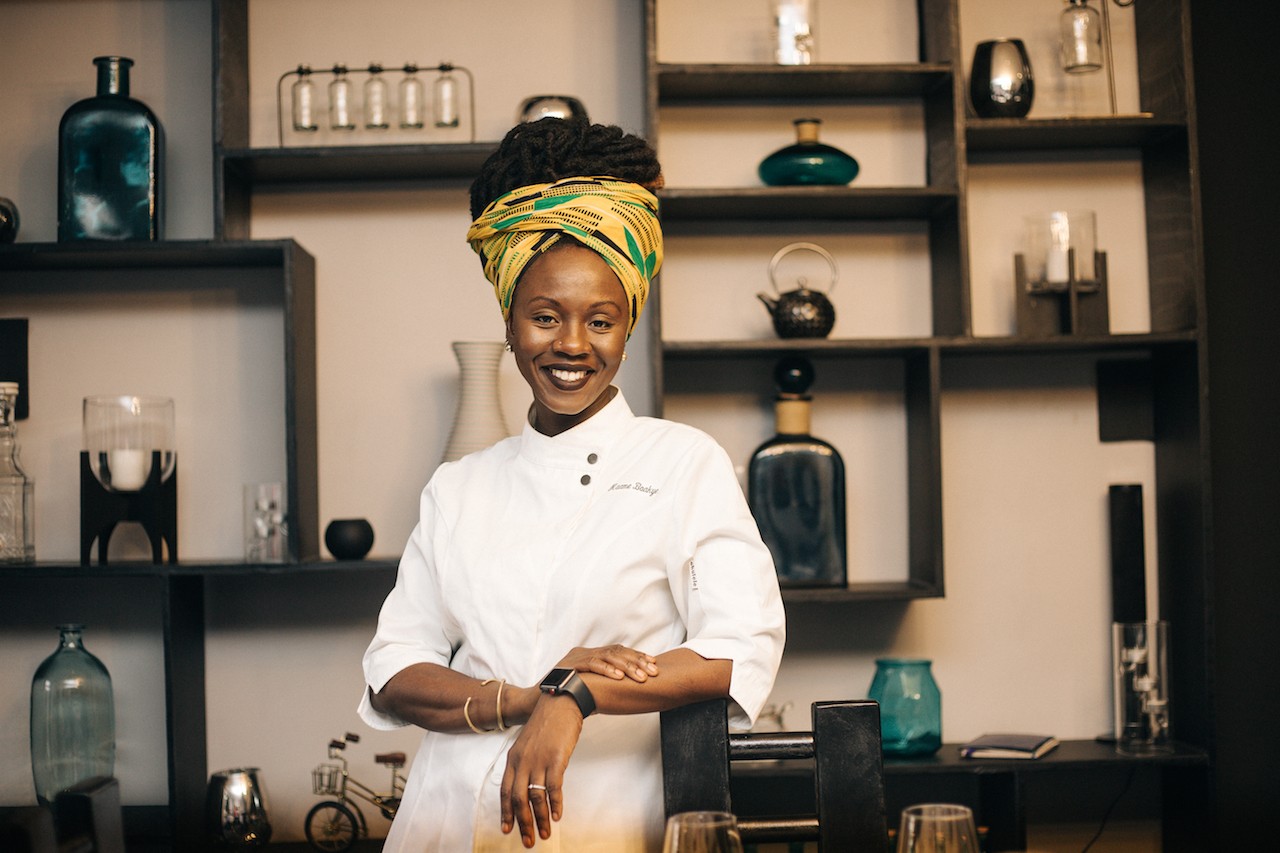 It takes true grit to launch a long-held dream less than two months before the coronavirus pandemic slammed doors shut on businesses around the world. When Maame Boakye celebrated the opening of GHastro in East Legon, she had not foreseen what would happen next in the Accra region of Ghana. “We opened on February 11. Literally, by March 23, we were packing up to close down completely because of the pandemic,” says the CEO and executive chef of GHastro. “One of the hardest parts was letting staff go without anything.”

There were no stimulus packages or unemployment checks for Boakye’s 15 employees. However, Ghana enforced stay-at-home orders, face masks, social distancing and border closures with fines and jail time for violators. The Ghana Health Service reported the number of coronavirus cases at 33,624 on July 28, with the country’s COVID-19 death toll remaining at 168. “It was really controlled. People took it very seriously when they saw the numbers going up,” Chef Boakye says.

Compare those numbers to the New York Times report of 4,750,500 people infected and 156,500 coronavirus deaths in the U.S. as of August 3. It makes the New York City chef’s decision to open her first restaurant in Ghana instead of NYC a wise choice. “We reopened in the first week of May when the lockdown was lifted. It is still kind of slow even now. We brought all the staff back, but with limited days and hours,” says GHastro’s owner.

Chef Boakye maintains a positive attitude about the future. The way she described herself in a June 16 appearance on Food Network’s “Chopped” reflects the can-do spirit of the private chef and restaurateur. She told the host and judges, “I intend to cook with all that I have. I’m naturally strong, competitive and fearless.”

As a private chef who has lived in New York and Ghana for most of her life, Boakye used her mastery of bold, spicy flavors to do what she set out to do:  take home a $10,000 prize and the title of Chopped Champion for the three dishes she prepared. “They actually enjoyed it, and I could tell from the looks on their faces when they tasted the food,” says the chef. “That made me proud that I was able to take whatever was given to me to create something edible.”

The mystery baskets on “Chopped” often contain what appear to be unappealing ingredients. Add that to the pressure of a ticking clock, and it makes what talented chefs come up with incredible. “From the first item, you see you’ve got to start thinking, ‘What am I going to make?’” Boakye created a taco appetizer with salmon fish heads, white asparagus, pea shoots and store-bought chicken pot pie in the first round. “Tacos are one of my daughter’s favorite dishes,” the “Chopped” winner said on the show. “I can hear her voice just rooting me on.”

The judges applauded her efforts too. After telling host Ted Allen that she would use the prize money to open a West African restaurant, actor and chef David Burtka praised her dish. “Well, if you do, I think you should put this on the menu because it’s fantastic. It’s really, really great.”

One reason decided to compete on “Chopped” was to teach her 12-year-old daughter, Makaylin Owusu, a lesson about perseverance. She wants her to believe you can accomplish anything when you put your mind to it and work hard. The chef made a few mistakes on her way to victory. But Boakye’s fresh peach crumble with rosemary ice cream and salted chicken and waffle taffy caramel gave her the win. Judge Amanda Freitag told her, “This is delicious. The peaches are really soft and luscious. I love the way you used the pretzel shortbread in the crisped topping.”

A smile spread across ’s face when she saw the last dish eliminated belonged to her competitor. She beat out two executive chefs and a chef/restaurateur to take home the $10,000 prize on the “Soda Flop” episode of the show. She and her husband of 13 years, Collins Owusu, added it to the money they had been saving for five years to open their West African restaurant. “It’s a fusion restaurant. It’s like Afro-Caribbean fusion. We have some American dishes on there, but with a little twist to it.”

GHastro stands for a Ghanaian gastronomy experience. Chef Boakye delights in preparing dishes with West African, Caribbean and American influences. She prefers not to be boxed into any one cuisine, especially after her experiences working five years for acclaimed chef Marcus Samuelsson at his Red Rooster restaurant in Harlem. Foods from the American South, Ethiopia, Sweden and other parts of the world appear on his menus. “It was really, really great. He is still my mentor. We still talk. We still text and call each other to see how things are going. He always shows support in everything that I do,” Boakye says.

Her restaurant in Ghana features West African and American favorites with Maame’s special touches. The oven-roasted pork shoulder bites have Caribbean jerk seasoning. Lobster mac & cheese is on the menu, as is a very popular West African jollof rice with shrimp and vegetables. The Southern buttermilk biscuits served with blossom honey and butter might be the most unique to patrons who have lived abroad. “When they do find out we have biscuits, they are totally blown away. No one has it in Ghana except for us. This is the place for them to come to get the things that they miss from home,” says Boakye.

GHastro’s chef finds running a restaurant in Ghana no different than in the U.S., except that some ingredients are harder to find or more expensive. Together, she and her husband, along with a cousin who is a general manager, still have to serve good food consistently, provide excellent service and manage the budget. “My husband is here every day. He was an accountant in the U.S, so he’s the money guy here at the restaurant. He lets me know when I’m spending too much on food costs.”

Boakye started dating Owusu while they were attending college in upstate New York. At that time, she wanted to become a psychologist and follow her parents and siblings into medicine. Both her brothers are doctors. Her younger sister is in medical school. Her father is a retired radiologist and her mother is a retired certified nurse’s aide. “I wasn’t doing so well in school for psychology. I was just hanging in there and I was pretty miserable,” Boakye says.

That is when Owusu saw a commercial for the Art Institute of New York’s culinary program and encouraged her to check it out. She did, and her father supported her decision to get a culinary arts degree. “It was a bit scary trying to tell my parents that I wasn’t going to take the same route as everybody else,” Boakye says. “I had already wasted all of my financial aid in school, so he [her father] had to pay out of pocket, which he didn’t mind. I really appreciate him for that.”

The restaurateur already loved cooking before she made her passion her profession. Boakye learned the art of combining African spices and flavors with other culinary influences cooking with her family. Growing up in New York and making friends with people from many different cultures expanded her expertise in fusion cooking. “When I cook, I want people to explore different flavors, textures and new things they probably haven’t tried before.”

Boakye’s reputation as a talented private chef earned her an invitation to the James Beard House last November. She joined a group of global chefs for the African Diaspora: Voodoo Culture Celebration. The menu featured dishes inspired by foods from West Africa, the Caribbean and the Americas. “It felt amazing and was such an honor to be able to cook there. My parents were there and you could tell how proud they were. It definitely was a very significant moment in my career.”

The chef now feels more confident about her dreams for the future as African food gains popularity and Black chefs receive more recognition for their contributions to world cuisines. She helped promote the acceptance of modern Afro-Caribbean cooking with her pop-up company, W.A.R. (West African Restaurant). She hosted her first pop-up dinner last March 6 in New York City on Ghana Independence Day. “It was a crazy, cold, snowy day in New York. I thought, what a stupid mistake I made. But we actually ended up selling out and going overcapacity. More than 100 people showed up,” says Boakye. The first time her pop-up participated in The World’s Fare international festival in 2019, W.A.R. won the “Best at the Fare Savory Award.

Next on her vision board is a brick and mortar restaurant in Manhattan, Harlem or Brooklyn. “My plan for the future is to build my culinary empire both in Africa and in the Western world,” says Boakye. “I also want to inspire other Black people to become chefs, rather than thinking the only acceptable careers are doctors, nurses, engineers and lawyers.”

GHastro’s executive chef gained more respect among young Black chefs with her win on “Chopped.” They want to know what they need to do to get on television or compete with the chefs attracting thousands of followers on the Internet. She gives them sound advice. “I tell them everything takes time. You should really try not to be in competition with anyone else. Focus on your dreams and what you want to do.”

You can follow Maame Boakye and keep up with her travels between Ghana and the U.S. on Instagram.