Shoe Crazy Wine is Made from Love and Sole 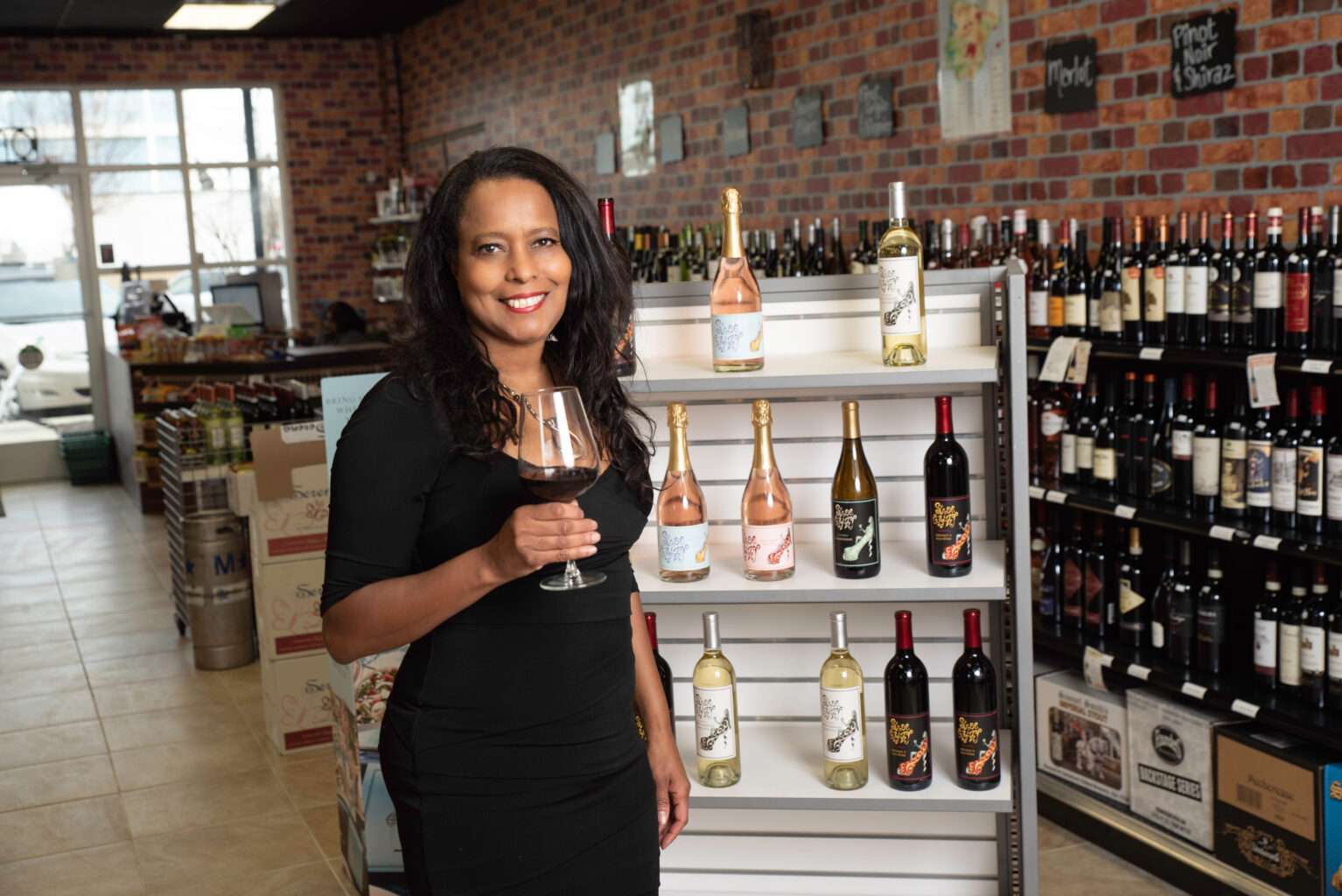 Gwen Hurt has always had a love for shoes. “As a kid, I would say, ‘God I know you’re listening. One day I want to have as much food as I want and shoes in every color.’” At thirteen, Hurt purchased her first pair of shoes with money she earned from her summer job. “I vividly remember the first pair that I purchased,” she says. “They were gold, closed-toe with kitten heels. I had to buy from the clearance rack, but I loved those shoes.” This purchase held a deeper meaning for Hurt, who was being raised in a single-parent household of six, as she and her siblings were each gifted a single pair of shoes for the whole year. “I look back fondly on that purchase because up until that point, we mostly had second-hand shoes.” Years later, Hurt’s love of shoes and nose for business would collide into a successful company: Shoe Crazy Wine.

A Childhood Influenced by Ambition

Hurt states that her childhood was rooted in very humble beginnings. “My mother [Mable] left an abusive husband with us kids and settled down in NYC,” Hurt says. Being a single parent while providing for a family of six and while living in New York is the trifecta of low-income survival. “We were poor and sometimes had very little to eat,” Hurt recalls.  But her mother was resilient, acquiring both a bachelor’s and master’s degree, all while doing domestic work. Her determination did not go unnoticed to a young Hurt. “My mom has always been an inspiration. My strength and tenacity derive from my challenging childhood.”

Determination and drive landed Hurt at Lincoln University, where she was pre-med, but the smell of formaldehyde gave her fainting spells, so she switched to human services. She met her future husband during her freshman year, fell in love and withdrew from college to focus on marriage and family. Hurt has no regrets about her decision as it was “a job I relished but always wanted something more.” As the years passed, she stumbled upon an opportunity and applied to be a customer support rep, an entry-level position with a computer company. Utilizing her education and homemaker skills, Hurt launched her career and quickly rose through the ranks. “I was a business operations and controls executive that built and led an international team of support for a Fortune 300 company.”

RELATED: From Hobby to Full-Time Business with Nicole Kearney of Sip & Share Wines

Hurt’s work ethic and ambition helped mold her position into a dream job where she traveled internationally and experienced what the world had to offer such as shoes. “My favorite pair was a sexy pair of booties purchased in Dubai.” Hurt says that she was visited many countries and typically picked up a pair of shoes from each of the many places she’s visited.

Despite being a loyal employee of fifteen years with a work ethic and ambition that brought success, Hurt found herself downsized by the company she had helped to elevate. “My position was given to someone younger with an Ivy League degree,” she says. “The company felt it needed a pedigree to run the organization that I had built with a HBCU education.” Hurt’s life took another turn shortly after that. While Hurt was driving with her daughter, Brittny, to collect her personal belongings, she got rear-ended at a stoplight by a speeding young driver. Hurt and her daughter Brittny were badly hurt and taken to the hospital. “Our injuries were serious and required many months of physical therapy.”

Regardless of her physical and financial setbacks, Hurt has remained emotionally and mentally strong. “My mantra is and has always been, ‘Mable did not raise any weak women.’ We are strong and determined.” Considering that people with serious injuries are three times more likely to be hospitalized over mental health, Hurt’s mantra and mindset proved beneficial for her recovery. To stay strong and focused, Hurt said that she found strength from within. “I talked to my inner self. I gave myself positive reinforcement,” she says. “I prayed a lot and talked to my mom, my children, my sisters. They told me to not give up and find my voice. I said this is not where I want to stay. I want to come into the light.”

In 2002 while at a restaurant, Hurt’s dinner date introduced her to wine, giving her a red zinfandel that created her love for wine. She decided to try to make it, picking up a wine kit to try out in her kitchen. Satisfied with her homemade elixir, she now had to figure out what to call it. “I wondered out loud what I should name it. Brittny sucked her teeth and said, ‘Name it something you love.’ I loved and was crazy about shoes. Hence the name, Shoe Crazy Wine.”

Then one day, while watching an episode of Bravo’s “The Real Housewives of Orange County,” when one of the housewives decided to go into the wine business. Brittny suggested that her mother do that as well. “My daughter said, ‘You can do that. You’re as smart if not smarter than they are.’ I chuckled.” But the idea appealed to Hurt who had her daughter’s support. “Two weeks later, I announced we were going into the wine business. Brittny was 100% behind me.”

Lacing Up and Back on Her Feet

Starting a new business is challenging to say the least and Hurt admits that she ventured into the industry with very little knowledge, learning the ways through a lot of trial and error. “I navigated through learning the business with a business partner that took financial advantage of me,” she said, but her mantra helped her from feeling defeated. “Learning from hard lessons, you never repeat them.”

Hurt has since become well versed and knowledgeable about the wine industry and is heavily present in every step of the process. “I am very involved,” she says. “From creating special blends and flavor palates in my kitchen and sending to our partner vineyards to create/duplicate on our behalf.” It’s also a family affair: Hurt’s three children work for Shoe Crazy Wine, helping grow the brand into a national business. Brittny called on a friend, artist Ellen Ross, to design the label. Hurt said she wanted the label to cater to everyone. “I told her I wanted a woman sitting in a shoe holding a glass of wine. I didn’t want the woman to be defined ethnically. I wanted her to be every woman and no one woman. She sketched it just as I had imagined it in my head.”

To date, Shoe Crazy Wine is sold in 34 states and can be found in big chain stores like Walmart, Costco and Total Wine. Hurt is currently the only Black winemaker who imports wine, a brand she gets from Portugal. A strategic move in a highly saturated market. “We are growing the distribution arm of our company. It is a natural progression to add other wine brands to our lineup. In this way, we are staying relevant in this highly competitive industry.”

Hurt’s motivation, drive and love for shoes are all present in her business and she has more plans for her company. “My goal is to ultimately build Shoe Crazy into an adult beverage company. We will release two spirits under the Shoe Crazy brand. They are Broken Heel Vodka and Dusty Boots Bourbon. Both are copyright protected and being trademarked.”

Even with the inevitable curveballs life can throw, Hurt’s resilience has paid off. “I guess at heart, I’m a risk taker and when the opportunity presented itself, I crossed my fingers, prayed for guidance and jumped in.”

Go to shoecrazywine.com and shop online. Check them out on Facebook, Instagram and Twitter. Shoe Crazy Wine is at Walmart, Costco, Total Wine, The Coast Guard, Navy Exchange, Andrews Joint Base and many wine shops, liquor store and restaurants in the Virginia regional area.