Why Wild Game is Always on the Menu for Justice Stewart 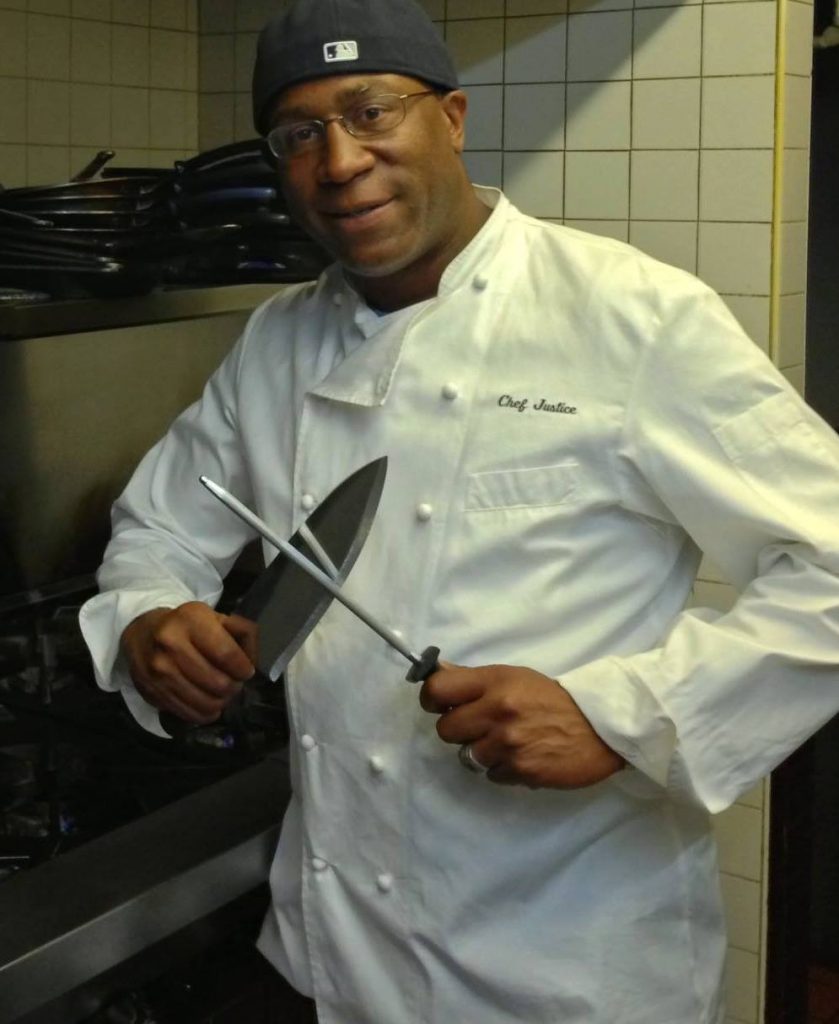 After one conversation with self-taught chef Justice Stewart, you may change the way you think about wild game and other meats deemed exotic simply because they are not consumed regularly in the American diet. “Sometimes we just judge things because it is different,” says Stewart with his undeniable New York accent.  While growing up, he says has always wanted to try wild game and now cooks it just about every week.  Although some are open to it, his enthusiasm hasn’t caught on to most of his friends and family. In fact, it casts a cloud of suspicion when he cooks and invites them over for a meal.  “I have my own friends that before I season anything, they want to see the packaging to make sure it is what I say it is,” says Stewart with a chuckle. He recently prepared kangaroo for his daughter and her fiancé.

The Queens native traded 14 years in the construction industry for a chef’s knife, hot gas stove and creative license to explore the world through food.  The trade-off, he says, was about being happy.  Although he made a good living, construction wasn’t satisfying anymore. That was five years ago.

Following this transition, he began catering with another chef for clients such as LinkedIn.  He was also a sous chef cooking for VIPs at Madison Square Garden during game season for the New York Knicks and Rangers.

Stewart has never attended culinary school or a class, but unless he shares that, you would never know. “I’ve always been in the kitchen with my grandmother and my mother and that is where the cooking fascination came from.  So I have always cooked,” says Stewart.  Over the years, he perfected his skills and gained approval from the family during holidays.  On his blog, Gourmet De-Constructed, Stewart calls himself an “average home cook,” which is an understatement to say the least.  When you stop by, don’t expect your “average” recipes because that is simply not who he is.  Instead, brace yourself for a trip on the exotic side with shark ceviche, stingray wings with a Grenoble sauce and camel ribs, which he says, were the best ribs he has ever tasted. But for foodies who aren’t quite ready to get on the exotic foods’ bandwagon, Stewart also delivers the classics with turkey meatballs and pan-fried catfish with shrimp.

He befriended an owner in Southern California who owns an exotic meat business and now Stewart has access to just about anything imaginable.  “I have python in my freezer right now,” he makes it known.  He especially lights up when he talks about his top five favorites: elk, emu, alpaca, beaver and camel ribs.  He says emu tastes like filet mignon and antelope meat releases hints of sage because it is something that they feed on.  Some of his least favorites include ostrich and also the buffalo that is raised on his friend’s ranch citing it as a lot gamier than what you find at the grocery store. “It is cleaner and leaner,” says Stewart which is one reason to expand your palate.  On the other hand, he also says that exotic meat is more expensive and it is not uncommon to spend $48 a pound depending on what you want. In addition, he notes, “If you like your meat cooked well-done, I wouldn’t even advise trying wild game.”  He says don’t go past medium rare or you will dry out the meat.

Stewart is creating quite a niche for himself as we haven’t seen someone this adventurous since Andrew Zimmern rose to popularity with his show “Bizarre Foods.” You can catch Stewart on YouTube as he continues filming his show, “Cooking with Justice.” He was also part of a YouTube show called “Neighborhood Chefs,” which is in talks about renewing its taping schedule in the future.

He took his passion for cooking to a kindergarten class earlier this year for Career Day where the key message was to stay in school. After his presentation, a few of the little ones shouted with excitement that they too wanted to be chefs. Giving back is important to Stewart who recalls a rough start in life.  Growing up in the projects, he sold drugs as a teenager which got him into trouble with the law.  “I had a very bumpy start [in life] and one day I woke up in jail and said this is not what I want and from there I willed my way from the streets.”

What Stewart does want for his life now is a food truck so that he can continue sharing his love of food with others. The po-boy-themed truck will hopefully hit New York streets in the near future but meanwhile, you can be on the lookout for another pop-up dinner with a menu curated for true foodies.  Stewart’s last dinner featured four courses and quickly sold out which is about average for this not-so-average chef.

To follow more of Stewart’s wild culinary adventures, be sure to visit his blog at https://gourmetdeconstructed.com.  You can also join the adventure on Facebook and Twitter.