Chef Jason Fullilove on Calibrating for Changes in the Restaurant Business 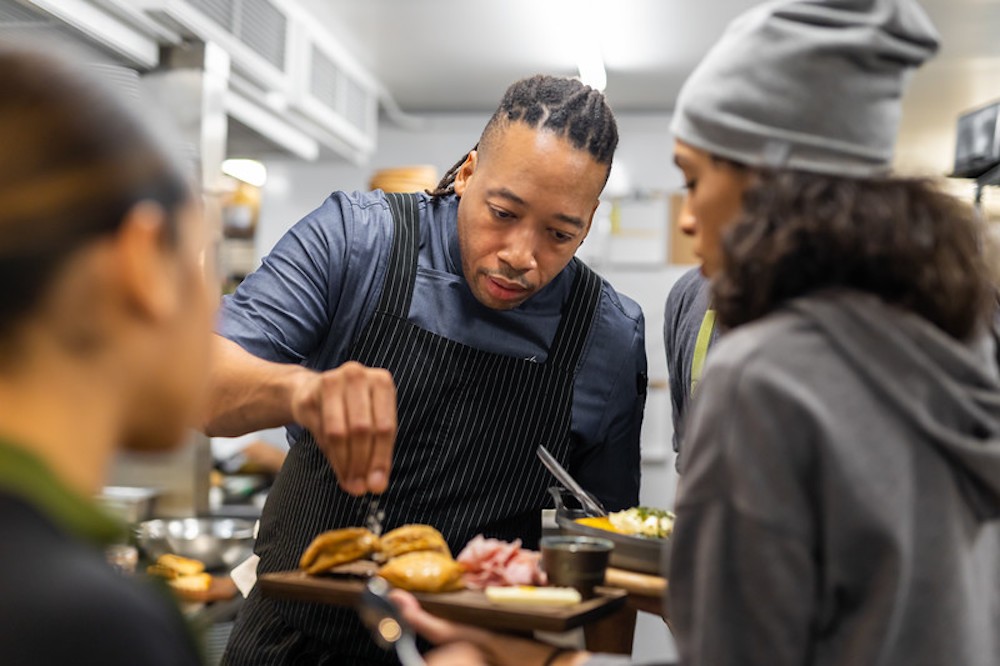 There comes a moment in every chef’s journey when he is driven to share his interpretation of the foods he loves and desire to share that expertise with his community. For Jason Fullilove, chef and owner of famed restaurant concept Barbara Jean Los Angeles and Ethereal Palate, LLC – an events and catering concept started in 2011 for pop-ups and restaurant consulting – this focus has been globally inspired soul food highlighting seafood and American cuisine. At the restaurant, established in 2014 and named after his mother, he rotates the menu regularly, keeping diners coming back for more. The beautifully plated dishes here are made from scratch with natural ingredients. A look at his Instagram feed, where he has been sharing recipes during the pandemic shelter-in-place phase in California, is sufficiently inspiring to want to follow with a cook-along.

Growing up in other parts of the world added to Fullilove’s gastronomic repertoire from a very young age. “I lived in southern Africa with my mother, who had a doctorate in international education. My memories of food there are strongly rooted in community and festivities. Also, very big delicious flavors of various roasts and stews.” With her, he traveled to southern parts of the continent and that exposure to international cuisines as well as his professional path has contributed to a flair for diverse spices and cooking techniques. “I haven’t been back to Africa since, but I plan on going again one day,” he says.

Recent travels have included a few favored spots such as Fiji in late 2019 and Curaçao earlier this year. “I like traveling to places and trying things that aren’t that mainstream. I love new flavors, ingredients, techniques and spices. I love traveling to Europe for food like everyone else.”

The chef’s love for the culinary world has seen him move from his hometown in Ohio to New York and then the Caribbean – where he was the chef de cuisine at the five-star Ritz Carlton in St. Thomas, U.S. Virgin Islands. He has called California home for a decade. Taking full advantage of the region’s farming legacy, he has immersed himself in the abundant quality local produce and farmers markets. Gaining inspiration from his surroundings, he cooks with fresh seasonal produce that keeps his menus interesting, serving a treat for diners at all times, no matter where he presents his creations. Whether the meat lover’s mac ‘n cheese he cooked for Tastemade or the BBQ pulled pork agnolotti he prepared on the Hallmark Channel, Fullilove consistently elevates traditional soul food with modern techniques and exquisite presentation.

His experience has included stints as executive chef at several highly esteemed Los Angeles locations such as The Magic Castle in Hollywood and Malibu Pier Restaurant & Bar. At the Michelin starred Patina Restaurant Group he handled food programming and special events for Los Angeles County Museum of Art (LACMA), Campanile/Tar Pit and New York’s BR Guest Hospitality. He has participated in numerous regional and national culinary events and has been featured on The Food Network, The Cooking Channel and “The Talk” on CBS. Several chef tutorials are available on SaltedTV.com, where he shares some of his signature recipes. Most recently, Fullilove was helming the kitchen at Abernethy’s at the newly renovated Music Center Plaza in downtown Los Angeles. Chefs participating in Abernethy’s Emerging Chefs Program change quarterly. However, Fullilove is the second chef to have a residency there.

Having experienced both partnering with other restaurants as well as his running own business, Fullilove shares, “Having your own business that you are financially responsible for is the most stress any person can have. Our margins in the hospitality industry are razor-thin and very unforgiving. But the reward for being your own boss is like nothing else. Partnering with other restaurants is a smart way to generate revenue and continue to build your brand.” Without a doubt, the current coronavirus crisis has brought along its challenges to businesses. How is he fairing during the pandemic? “I have begun to license the Barbara Jean concept in 2018 which is a much better business deal for me,” he says. “Our BJLA location at the Los Angeles Football Club Banc of California Stadium has closed. Also, our run at Abernethy’s was cut short due to the closure of the L.A. Music Center. Both were related to COVID-19.”

On the licensing of the Barbara Jean concept, Fullilove says, “It’s not just about licensing a restaurant concept, it’s about licensing my name as well. I noticed early on that most truly successful chefs had their names on several restaurants, food service and hospitality projects. My goal has always been to build my brand and name recognition so I can have my recipes as well as dishes and culture attached to more than one location. It’s a long process and I’m continuing to learn and refine it. I will say this as in any business, there have been a lot of ups and downs. However, I’m always looking into new opportunities for licensing and partnerships.” Though his plans might have morphed a bit to address the constantly changing landscape under current circumstances, he remains focused.

“I want to continue to license my brands and concepts. I want to continue to build my catering and special events business,” he shares. “I would also like to produce culinary-based online content. I’m looking into being able to drop ship certain signature food items nationally.”

Fullilove is optimistic about future plans despite the unprecedented effects on the hospitality sector and the restaurant business in particular. “No one really knows what our industry is going to look like after this and for how long. Before this, I was exploring other revenue sources in my industry and I’m still continuing to do that. Our industry is struggling like we have never seen before. I truly hope this will all be over soon, and we can all get back to work.”