Celebrity Chef Siba Mtongana: She Eats, She Prays, She Loves Food and Travel 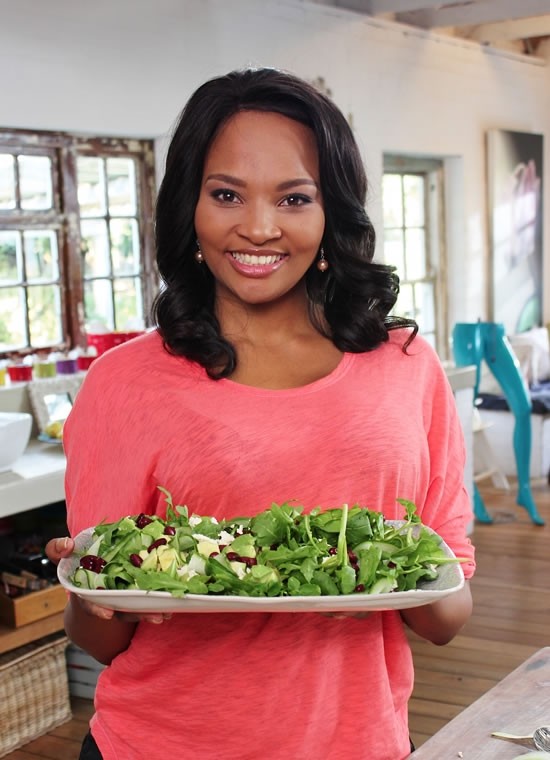 Siba Mtongana has been around the world via her palate. “One of the great things about food is that it can take you to all these different countries without you ever actually going there.

“I love South-East-Asian cooking, for example. The bold yet mellow flavors. The imperfect harmony that blends the sweet, the salty, the sour, and the dash of chili — and that it’s healthy, light and quick. Those are some of my core values when it comes to cooking.

“And I love Indian. We have a huge Indian pop in South Africa. At home, growing up, my mom used curry spices; Indian spices. It’s normal for me to use a mild curry powder in my cooking — so normal, I forget it's Indian.

“And I love North African flavors, like Moroccan cooking; their spices and paste and the preserved lemon. And I love the Italian way of cooking.

“And Mexican food. We went to a Mexican restaurant in Cape Town yesterday.

“And we went to Portugal when I was launching Siba’s Table and it was amazing. I guess you can tell I just love food and I love cooking. I eat the different foods from the different countries and am inspired to create my own interpretations.”

Find a Way to Food

Cape Town-based Siba Mtongana is the host of “Siba’s Table.” It debuted in South Africa on the Food Network channel in September 2013 and was an instant hit.  It is now broadcast in over 90 countries in Europe, Middle East and Africa and the first season is currently being beamed to more than 60 million households via the Cooking Channel in the United States.

For the ebullient, super-friendly, creative, down-to-earth celebrity chef — wife of Brian Mtongana, a below-the-line advertising executive, mom of Lonwabo, 2, (both have featured in her show) and another baby is due next month — her meteoric rise to stardom has been more than a dream come true.

It’s not something she planned. “At one point when I was young, I wanted to be a doctor. Then a teacher, because my mom was a teacher. Then when I was about 10 I wanted to be the first Black woman president — it was the early 1990s and Nelson Mandela had been released from jail and was coming into power and I loved him. And then I wanted to be a lawyer.

“Then I started seeing programs on TV with these British celebrity chefs. First there was Delia Smith, who was very prim and proper and taught you how to make things like souffles. Then Jamie (Oliver) came along, who I loved so much. And then Nigella, who showed you the kitchen could be glamourous, and then Ina Garten, and many others.

“I thought I wanted to do something food-related but at school, career guidance pushed for main-stream things like IT, the medical profession and engineer. My mom said cooking was a hobby and I should get a proper education to fall back on; do a proper course.

“But my big sister helped me by doing research into courses that offered something food-related. She found me the course I eventually decided to take — a food and consumer sciences degree that was like a bridge between cheffing, nutrition and media studies. My sister said, ‘This is you.' Plus it gives you options. It sounded scientific to my mom, so she agreed.”

In her first year, Mtongana got a job at a deli in Cape Town to start getting hands-on experience. Then at her college, she was offered a job tutoring Xhosa students (“I’m Xhosa-speaking by birth. It’s my tribe and Nelson Mandela’s tribe — same roots,” she says, peeling into laughter.

At some point when she said she was feeling a little bored, one of her lecturers recommended her to Drum — an iconic South African Black magazine — to be trained as food editor.

“Drum started as a political magazine in the apartheid era. After freedom, it grew into a lifestyle magazine. It’s the oldest black magazine in South Africa.”

She spent five years at Drum. And here she brings in a story that tells you a lot about who Siba is and what makes her tick.

“I’ve always followed my heart in terms of doing what feels right to me. That has somehow landed me in the right path,” she says when I ask her to share the secret of her success.

“My father, when I was leaving home, reminded me and my siblings that all of us children had opportunities he and my mom never had. I come from a big family; we are six, I am the last-born and have three big sisters.

“My father said, never be afraid to work hard. He told me that I should work for somebody and work like a slave for five years. He said I should not care what other people thought or said about this. He said ‘work hard and take all that you can learn. You’re preparing yourself for your own empire. When you’ve learned, then you build your own thing.’”

She says many people gave her advice. “But that really stuck with me. I stayed with Drum for nearly five yeas. I can’t say it was a conscious decision based on what my dad said, but I did work hard. And if you work very hard, the right people pay attention.” Spiritually her mantra is: “I do my best, and God does the rest.”

Her love of cooking and food, she says, came from her mom. “We had a small garden and then another bigger one outside our yard that my dad tended for my mom. She’d send us to get French herbs, all sorts of veggies, blackberries from the tree. We were living in East London.

“My mom was not like an elaborate cook, but she did everything. Pasta, pap or umphokoqo — crumbled maize meal (a form of grits). The ratio between the water and the maize meal is critical. Too much it doesn’t crumble and is more like porridge.

“My mom was a free-style cook. If you asked her, for instance, how much salt to put in, she’d say ‘just feel it with your hands.’

“That didn’t make sense, I thought. But whenever she felt I was asking too many questions, she’d say, ‘You will get the hang of it when you’re older.’ And she was right. The more you cook, the more you learn about it.”

Siba hasn’t traveled extensively — yet! “I’ve been to Zambia; and Kenya was wonderful. I’ve been to London, Dubai, Belgian and Portugal.

“I haven’t been to the US. But a tour is being planned.”

Are there any reasons she thinks travel is a good idea?

“Absolutely,” she says. “Travel opens your mind to things you’ve never thought of before. For instance, I had a new level or respect for Belgian waffles when I tasted them there. But the reasons go way beyond food. Travel makes you step right out of the box.”

And cooking? Why should people cook?

“I can’t imagine anyone not cooking. Cooking is an amazing thing. It binds you together as a family. I have good memories of my grandmother’s cooking that will last me a lifetime.”

She also believes in social responsibility and sharing with others. “I’d love to work with a big organization like the UN where I could help in the food and nutrition sphere. I think giving back is the core of what my mother instilled in us. It’s the spirt of ubuntu. If you’re given a big platform, you must do good beyond yourself.

“So in the future, I want to have a foundation for young kids where education and nutrition are key. I’m till refining and clarifying the idea.”

Siba’s next star turn will be on stage at the Good Food and Wine Show in Durban later this month.

“I’ll be launching two dishes; a main dish of lamb chops stuffed with pesto and extra pine nuts and a salmon salad with very nice elements and a dressing. And people are always asking me how to make the perfect mash, so I will show them how.”

Look forward to learning on a future episode of “Siba’s Table!”