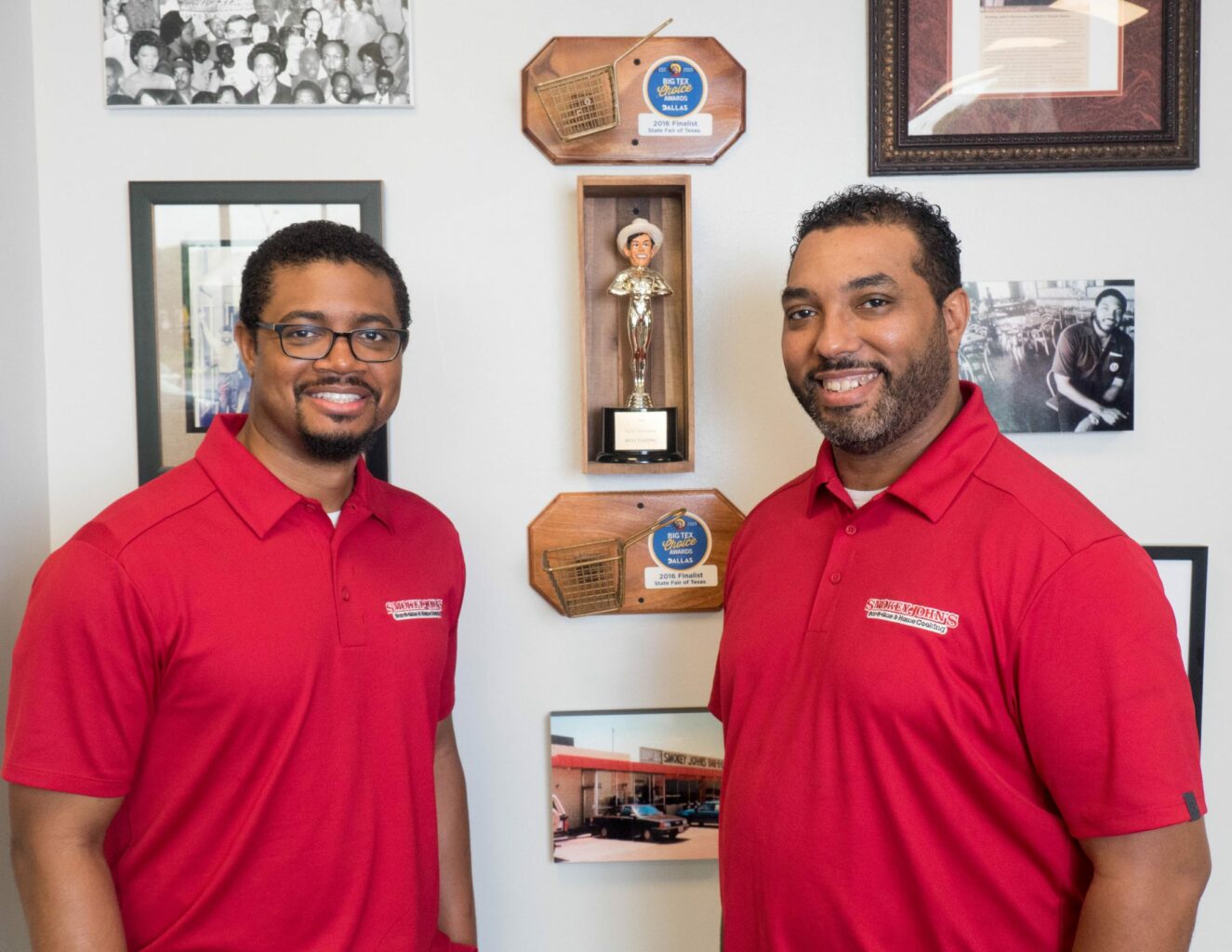 The restaurant industry is taking one of the biggest hits in history due to COVID-19. While many are experiencing adversity of this magnitude for the first time, it's all too familiar for Smokey John's Bar-B-Que & Home Cooking, a Dallas-based restaurant that's been around since 1976. After closing down due to a fire in 2017, owners and siblings Brent and Juan Reaves reopened in January 2019, only to be challenged by the pandemic the next year.

Meanwhile, in March this year, chef Amber Williams, owner of Le Rouge Cuisine, which specializes in Creole fusion, began her to-go concept Seaux Tasty, which was scheduled to appear at the Dallas Farmers Market. When the pandemic hit, she turned to virtual cooking classes instead. But it has taken some effort on the part of both businesses to keep going to enable future plans.

On the Shoulders of the Next Generation

At Smokey John’s, operations have continued through the pandemic with the dining room shut down, but takeout, delivery and curbside options available. “We were down 50–55% the first 3–4 weeks,” says younger brother Brent. The restaurant seats about 99, but being customer-friendly in these times means moving tables out to maintain social distancing. With a staff of 26, the siblings continue to steer the business founded by their father, who passed away in August 2019 forward. But their paths to working together have been different.

Juan worked in event marketing before joining the business. He amassed a wealth of knowledge during that time on how to run events, manage large budgets and think on a larger scale having worked with large brands such as NBA, Nike, Footlocker, Sprite and Gatorade. Brent, on the other hand, started in the restaurant as a 22-year-old watching the business evolve even as he did. “What has probably been the biggest impact is watching us grow from barely having any sales to breaking records year after year because of the things we were doing to create more attention,” says Juan.

The brothers officially took over the local mom and pop niche business in 2013, but a fire in September 2017 halted progress, shutting down the restaurant for 16 months. About 4,000 sq. ft. had to be completely renovated. “It was a tight budget. Juan and I were the contractors; that was our first commercial project ever. A friend of ours helped as well,” says Brent. “The fire really prepared us for the pandemic. So when COVID-19 hit, it was an advantage because at least we had a building to operate out of.”

Realizing quickly that they couldn’t rely on their dad’s aging client base for business, they worked hard to develop their own reputation. Social media played a big role. What started as a way to stay connected with customers during the pandemic has now turned into a regular broadcast on Facebook. Think theme nights such as Motivation Mondays to Wild Card Wednesdays and Food Fridays. And while most of the menu has stayed pretty consistent over the years — bestsellers include ribs and their grandmother’s peach cobbler and banana pudding — they did introduce a secret menu (featuring items from the regular menu but presented differently) after the fire that has its own set of fans.

“The biggest priority right now is creating structure and systems for the business because our hope is to open up more locations,” shares Brent. “Our dad’s dream was to build the business and then sell it. We want to achieve that goal in his honor and we also have a lot of other things we want to do,” says Juan.

On the Strength of Chutzpah and Verve

With Le Rouge Cuisine established in 2014, chef Amber Williams brought an elevated culinary brand to Dallas, providing private chef services along with event and corporate catering. Thanks to COVID-19, she added virtual cooking classes and tutorials added to her offerings. “My virtual services started a few months ago, but I can now see that I’m going to keep this going even after,” she shares.

Williams took the business full-time in 2015 and now five years later says, “It’s been a roller coaster, but I wouldn’t be anywhere else, so I will say that just the normal struggles of entrepreneurship have definitely prepared me for COVID-19.”

A self-taught culinary professional, Williams has a bachelor’s degree in business and entrepreneurship and worked in corporate America as she dabbled with cooking on the side. Not going to culinary school felt like a weakness, but today she sees it as a strength. “It was a very huge insecurity for me. Going to culinary school was a goal; that certificate was my stamp of approval. But now, I take my self-taught status very seriously.”

Born and raised in Texas, but with some family hailing from Louisiana, Williams was exposed to both cultures growing up. Being a student of the craft and seeing what a huge melting pot Dallas is, she researched the different cultures represented. In the process of blending some of those culinary inspirations, Creole-fusion became her signature style.

One of her goals for 2020 was to start her residency at the Dallas Farmers Market, launching the to-go side of her brand called Seaux Tasty. Two weeks before opening day, shelter in place took effect. Williams pivoted to doing quarantine meals for the next few months, finally landing on her virtual classes. Typically an hour long, she covers two to three recipes and every recipe is custom to that particular event. You can find drool-worthy images of her food prep on her website and social media. “People eat with their eyes first, so I try to make sure they get a glimpse of what they will experience when they book me.”

During the quarantine, Williams turned vegan for health reasons. Her trainer, who is from New Orleans, is also vegan, and the two bonded over a love for Louisiana food but wanting to eat more healthily. They now have a book “Vegan for the Soul” that they hope to release digitally by the end of the year. Changing her diet has allowed Williams to be more educated about food and to educate her clients, especially if they have health issues or want to tailor their diets but not sacrifice on flavor. “It helped me tremendously and that really shines through on the flavor that my customers experience.”

Lessons for the Journey

Both businesses, one a family-owned physical location managed by siblings and the other a woman-owned virtual private chef service, have lessons to share from their ongoing professional trajectories and recent global events.

For the Reaves brothers, persistence and resilience were key. In the last three years, they experienced a fire causing a complete shutdown and rebuild, the death of their father in the middle of a record-breaking year and then COVID-19. Despite all the trials and struggles, they are focused on their goal and believe in their brand to make it through these tough times.

Williams shares, “You can never be too comfortable or hold on too tightly to your plans. You always have to be prepared to pivot and that’s one of the things I want to take out of this and apply it for years down the line.”