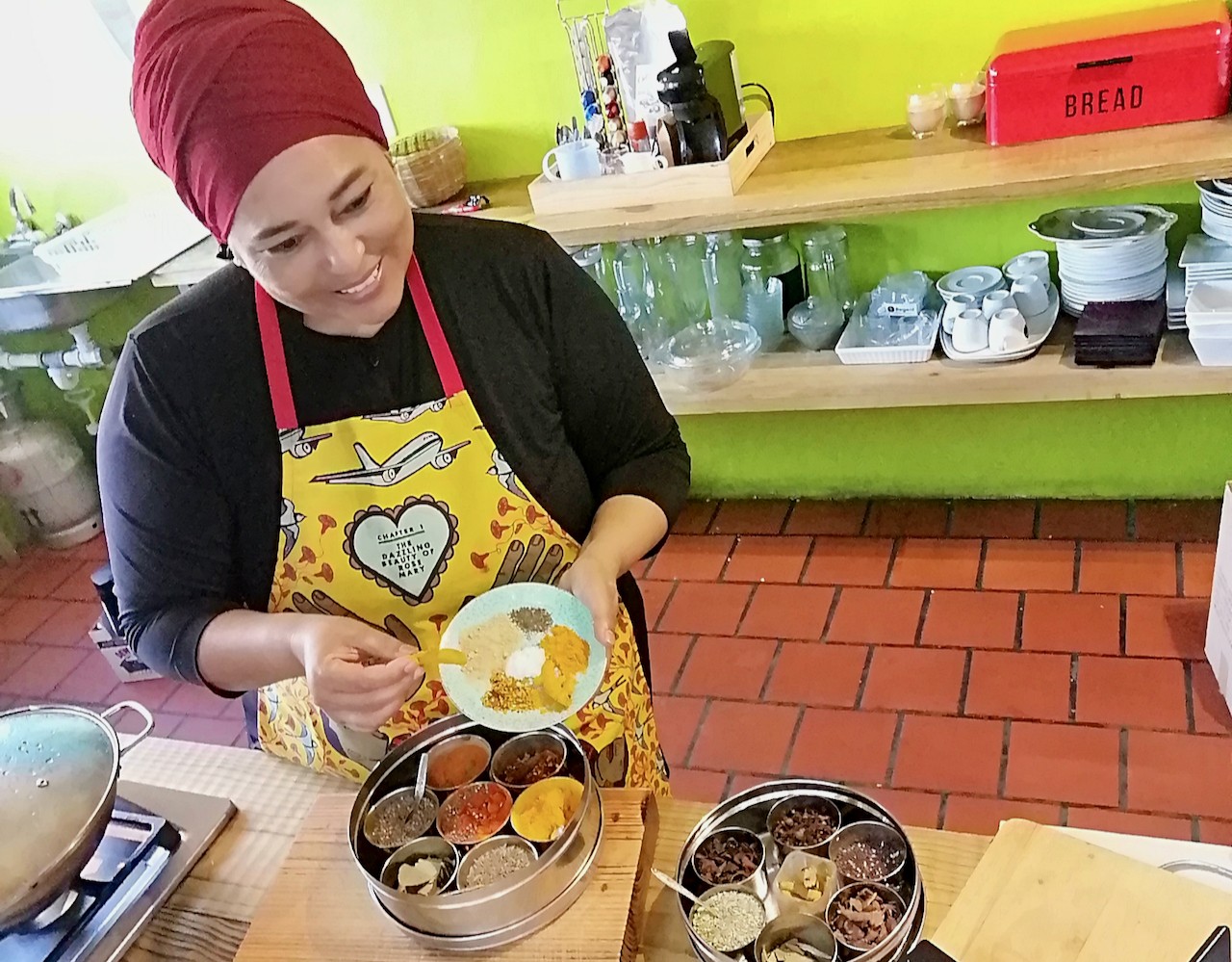 “Food is not a thing. It’s a feeling,” says Fayruza Abrahams.

The Cape Town resident professes to have “been a foodie since I was nine or ten years old” and snagged an airline job that saw her eat her way around the world when previously white-washed doors in the airline industry opened post-apartheid in South Africa.  Abrahams has been introducing a global mix of travelers to the spicy and delicious, distinctive world of Cape Malay cuisine for the past four years. Cuisine known for its sweet, sour, fruity and aromatic flavors with spices such as cinnamon, saffron, aniseed and tamarind.

“My mom was surprised when I told her one day that when I was a child growing up, I thought we were rich.” Her mom pointed out that in the conventional sense, which equates “rich” with money, this was by no means the case.

“We were, in fact, eating meals prepared by my grandmother from extremely humble ingredients. Simple food. And she cooked because my parents were both out working.

“But the thing is, at mealtime the whole family would sit around the table. There would be lots of laughter. We’d share stories. The food was delicious. Every night felt like a feast. Much later, I came to realize that what I experienced as our being rich was this feeling.”

And at the same time, I am in my kitchen, attempting to keep up; chopping onions, tomatoes and garlic. I am trying to find my little package of cinnamon sticks, which I know I bought. Have you ever wondered how many days of your life you’ve spent looking for things that are right here? In front of you. Somewhere.

I am enjoying her stories and the conversation. And every so often checking in on the couple who have Zoomed into her kitchen and her online class from London. They are drinking wine while they cook and seem to be truly in the swing of things.

Abrahams, for about four years — until physical distancing, lockdown and Stay Home! became the order of the day — would welcome walking, breathing, in-person groups of travelers, many from the United States, into her kitchen in Bo-Kaap, the oldest surviving residential neighborhood in Cape Town.

Bo-Kaap, a popular tourist destination, is known for its vibrantly colorful houses, its diversity rooted in Malaysian, African, Indian and Sri Lankan culture — and its history. Many residents are descendants of slaves brought to South Africa by the Dutch in the 16th and 17th centuries.

What we’re doing via our laptops in her kitchen is the Learn to Cook Cape Malay Curry class she offers via the Airbnb online experience platform that launched after COVID-19 changed our world.

Prior to that, she was regularly running four workshops via the Airbnb “in-person” experiences platform (now on hiatus). She offered a more comprehensive version of the class we’re doing with her, the difference being that all participants would sit down at the end to feast on what they’d helped, and learned, to prepare.

She was also, separately, teaching a spice tutorial with a focus on flavor and health benefits “where we would talk and share stories on culture and heritage.” A lot of her guests, she says, were “come-backs” and after she was repeatedly asked to teach a class on making bobotie (a South African dish of spiced minced meat baked with an egg-based topping), she added a bobotie class where guests would also make and eat malva pudding (another South African classic).”

Intrigued by the interest of travelers in desserts, she added her Cape Malay dessert experience. “Here, I cooked and had everything prepared. It was like a high tea, with the focus on sitting down and enjoying and learning about the Cape Malay Bo-Kaap culture, heritage and experience. And indulging.”

In early April, the virus having pretty much shut down all aspects of travel, her Airbnb manager called her. “Could I adapt my class to online? I said I was sure I could teach a shortened version of my key Cape Malay curry class. Tell people about Bo-Kaap, the food culture, the flavour components, the spices. I teach people to make a curry paste and at the end of the class, a golden turmeric milk drink.”

Since lockdown, she has also taught groups, done team-building classes and when asked, private lessons. Which means she still has people from around the world in her kitchen. But right now, you don’t need to leave yours to be there.

This takes us back to how she got to be here, in the culinary field, in the first place.

Similarly for many South Africans, when apartheid ended (the country’s first democratic elections were held in April 1994), Abrahams’ life opened up. “During apartheid, South African Airways crew and flight attendants were primarily white. This changed and mid-1995, I started with SAA.”

I first spoke to Abrahams a couple of weeks before we cooked together in our respective kitchens. I found her while looking to see if there were any South Africans teaching on the new Airbnb online platform. She was as easy to reach via her personal Taste Malay website as through Airbnb, where the 52-year-old launched her then-new career four years ago.

Within a couple of days we were on WhatsApp chatting. She told me how she had moved quickly from senior cabin crew to purser: chief flight attendant. “I traveled for 14 years, all over the world.” Africa, Europe, the United States, India, Asia.

“When I started flying, I saw it as an opportunity not just to see as much of the world as possible but to experience the food. I don’t drink or smoke and while some cabin crew, exhausted on arrival after a long flight, would unwind and go to bed, I would go out looking for food experiences, except back then you didn’t call them that.

“Wherever I was, I would try to engage with the local culture. Eat with people. Talk with people about food. I would go to markets. Sample street food. Try out restaurants. Go to people’s homes if they invited me. If it had a heartbeat and was permissible in my culture, I would give it a try.

“That way I became more and more passionate about food. I collected recipes. Even pestered chefs at different stopovers for recipes. It was all pure interest. I had no idea then that I would do anything with them other than put my spin on them and make them at home.”

There was, of course, no such thing back then as Airbnb. No such career as offering food experiences from home. She had no idea that a time would come when she would put some of these recipes, adapted through trial and error, into a soon-to-be-launched cookbook, which she would call “Around My Table” and where she would write stories — personal memoir — to share with the recipes.

After 14 years of flying, Abrahams’ dad died and her mom suggested it was time for her to ground herself. Come back home. Be supportive. So she did.

She settled back into Bo-Kaap and got a job with the Cape Town cableway — the iconic cable car that takes people up Table Mountain. She was in customer service, training people in service delivery. Until she was stricken with Graves’ disease, an immune system disorder that results in the overproduction of thyroid hormones.

The long and short, she says, is that she had to give up her job and couldn’t work for the long while it took her to recover.

But she needed to work, and as soon as she could, she started job-hunting, knowing she wasn’t up to the kind of hectic jobs with relentless hours she’d had before. “Also, I found there weren’t many jobs to be had.”

She was stressed and stressed out. Until one day her niece suggested she look at Airbnb, thinking she could perhaps earn a passive income letting out a section of her home.

“I didn’t know of the existence of Airbnb at the time,” she laughs. But she looked online, saw the Airbnb “experiences” option, and “I fell in love with the idea. I thought I could put something together around what I was passionate about and love: food and cooking.

“I contacted Airbnb. I said my idea was to teach people about my culture and my heritage through food. Cook in a fun and educational way. Have people be engaged. My career, looking back, was people first and then food. This would combine the two.”

She had one group sign up for a class and come to her home. And then another. And another. “I started in October 2017. By January 2018, I had accumulated 100 5-star reviews. My Airbnb manager asked, “What are you doing?”

“For me the recipe for success is to be open, vulnerable, transparent. I feel people want to connect. They want recognition. They want to feel in touch. Anyone can find recipes online. But I am a people person. I love people. I love sharing with people — food and recipes and stories. I love to tell them about my travels and my culture. About how I fell ill then got into this.

“How, while things were falling out of place they were in fact falling into place.”

And isn’t that a good life lesson? One we especially need to hear and keep in mind right now.

To connect with Abrahams about her cooking classes, visit her website.