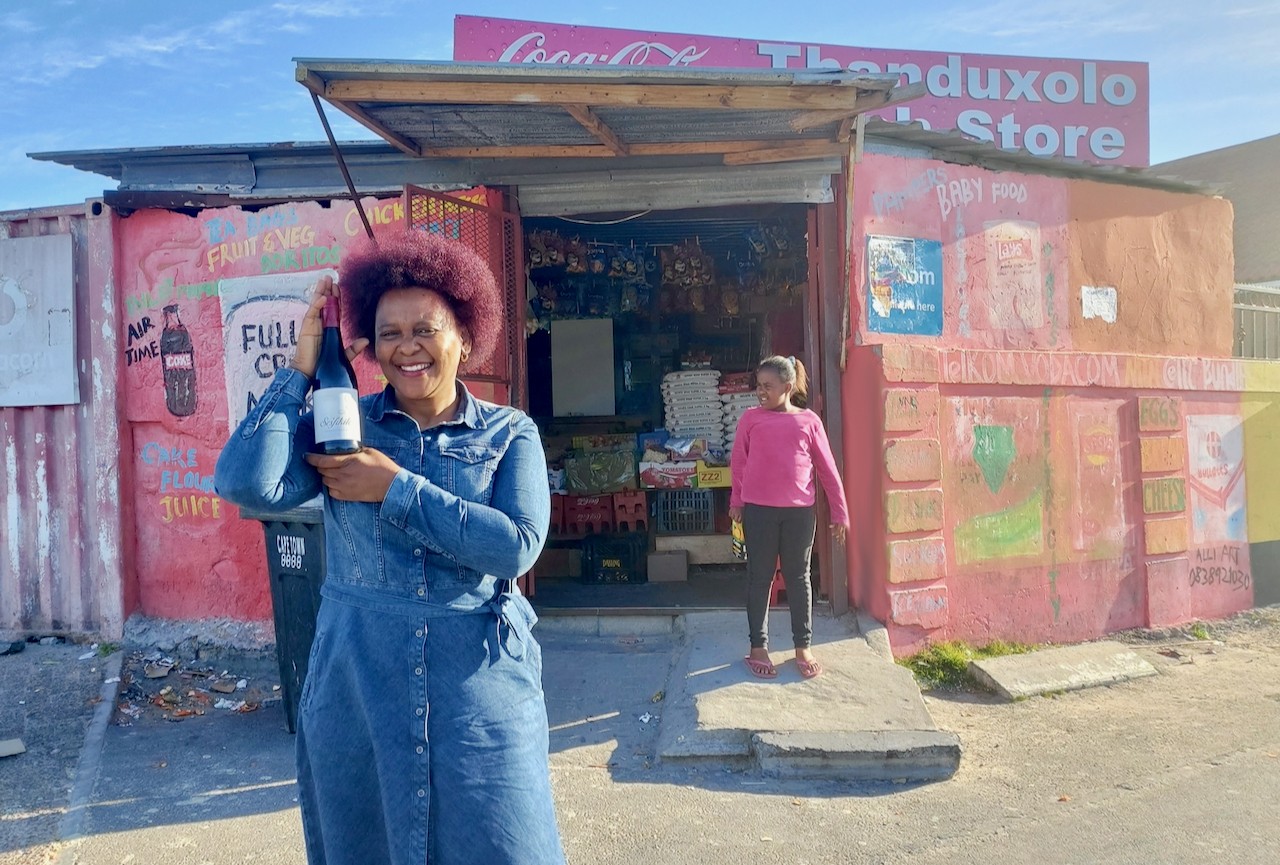 Pictured: Nondumiso Pikashe in Gugulethu where she was born and lives | Photo credit: Noluthando Pikashe

In a sense, this story speaks to that contentious old chestnut, “Those who can, do; those who can’t, teach.” Not to knock the special teachers who inspire lives in this most worthy of professions. But read on.

Perhaps you will see why the oft-quoted line — from George Bernard Shaw’s 1903 play, Man and Superman — came to mind when I spoke with gutsy South African wine woman Nondumiso Pikashe.

Pikashe is a former high school teacher. A veteran of 13 years in the classroom. That was before she stepped out of her comfort zone and into the world of wine. Before she established Ses'fikile Wines, her South African brand.  Pikashe explains that the words “ses’fikile” translate from Xhosa, the language of her ancestors, as “We have arrived.”

“These three words are built on a foundation of personal and communal struggle, yet they also look forward positively, with the hope of a better tomorrow,” she writes on her Ses'fikile Wines website. It is also what she tells me when we connect to talk via WhatsApp.

Let me add here that I had previously met Pikashe twice. In person. At wine shows, when she brought her wines from her home base near Cape Town to Durban. Both times, amidst the hubbub of a couple of hundred winemakers pouring for the tasting public, we chatted about her Ses’fikile varietals.

Both times I tasted her chenin blanc/roussanne white blend and her shiraz/cinsault red blend. Both times found them so delicious, I made purchases and took bottles home.

No wine shows for either of us this year, sadly. COVID has put paid to that. In fact, no wine sales for several weeks when the South African government banned the sale of alcohol as a pandemic lockdown measure.

Pikashe and I connect for this story on the eve of the lifting of what many called our “prohibition.”  By then, wine farms were for sale, many wine crops were devastated and the wine industry, along with the shattered restaurant industry — the same as in the United States and elsewhere — was set to try to claw its way back.

It was time for Pikashe to pick up on some impressive wine wins and accolades that came her way late in 2019.  See Pikashe on YouTube tasting her award-winning wines.

Pikashe was born — and lives — in Gugulethu, a township on the outskirts of Cape Town, which has a strong apartheid-era and anti-apartheid history. In recent years it has become a popular tourist destination. For safety, visitors from overseas are advised to take tours rather than go there alone.

“Gugulethu and (nearby) Khayelitsha, where I taught high school English and life orientation for 13 years, are both close to the Cape Winelands. Yet living and working in the townships, one didn’t get to know anything about the beautiful manicured vineyard areas South Africa is famous for. Or about wine.

“While I grew up there, all this was foreign to me.”

It was not too long after apartheid ended that Pikashe heard Thabo Mbeki (who succeeded Nelson Mandela as president) give a speech in which he encouraged women to venture into business.

“In post-apartheid South Africa, the country was changing for the better in terms of possible income sources. I thought maybe I could switch careers. I won’t say that I outgrew teaching. But I felt suffocated by the classroom with all its limitations. As a profession, teaching is honorable. That I will always maintain. But teaching in the township has so many covert challenges. You become a social worker, a counselor to parents, a nurse, a security guard.”

Mbeki’s encouraging speech advocating entrepreneurship was echoed by others. “I thought maybe I could get into business. I gathered some teaching friends who said they were also keen to make a change.”

“While I saw the well-tended vineyards and the media talked about the beauty and elegance of wine, in my community wine was abused and despised.”

The discrepancies between the two pictures piqued her interest and curiosity. “I decided I had to learn about wine.”

She learned, among many things, that the type of wine people in her community was drinking was cheap and nasty. “What one might drink simply to get drunk. No complexity, no character, no structure. Just alcohol to put people in a drunken stupor.”

On the other hand, she found what she calls “Wine — this beautiful thing. So much to be appreciated. The conditions of soil and earth and sea and the concept of terroir. The different grape varietals. The partnerships. All that happens in the cellar. I drew an analogy between winemaking and bringing children to earth.”

She made another discovery that defines her attitude toward wine.

When I ask Pikashe when she started drinking wine, she stops me.

The Business of Wine

Having resigned from teaching, Pikashe started learning all she could about the business of wine. “I realized after looking at the whole value chain that I would not be able to own a vineyard or a cellar. Also that there were all these elements involved in creating a wine, including graphic design for the label, the distribution and so on. I didn’t have the money or the expertise.”

But she and her former colleagues — the small group of would-be entrepreneurs — connected with the (then) newly formed empowerment agency, the Black Association of Wine and Spirits Industry (BAWSI). “They linked us to winemaking workshops, gave us information…” The organization set Pikashe on a path, which saw her come up with Ses’fikile, the brand rooted in a story of triumph and celebration.

At some point, though, she realized her “team” didn’t have her drive and enthusiasm. They settled back into teaching, something she at that point also briefly considered.

“But I realized I loved this thing. Wine. And the government was still calling for Black women to come into their own.”

She came to accept that, “As with many ventures, most go their separate ways. I remain standing.”

She had set up the company with them. Now she disbanded it. Kept the name. “I reinvented the wheel and registered a new company. Now I am the sole owner.”

The time had come for her to get into the production of the wine she had been learning about under the name she had trademarked.

Pikashe had been attending workshops on winemaking. On wine marketing. She had attended wine exhibitions and visited wine farms “to understand the value chain.” She studied through the International Wine Education Center and was awarded her WSET Level 2 qualification. She got grants and funding and support from the SA Wine Industry Transformation Unit.

Along the way, she set about finding a wine farm to partner with to produce the particular wines she wanted for her Ses’fikile brand.

“It was a tumultuous journey of exploitation. I met up with people who didn’t want me to be there. They needed a Black Economic Empowerment (BEE) partner so they could exploit the BEE funding and all that came with it.”

It was a hectic time, she says. “Until I found the wine farm partner I am with now.”

She has been in a relationship with Leeuwenkuil Family Vineyards (Lion’s Lair) since 2016.

“I am not an enologist. I don’t make the wine. But I decide on the wines I want and specify the outcome. I understand the dynamics. I get my grapes from their vineyards. I am sometimes part of the harvest, sometimes not. I work with a team of winemakers. We taste together to get to the wine that I want.”

Her wine. Her choice. Her blend. All done in house.

Pikashe says her understanding of “ses’fikile” is that the arrival is a journey, a process. It’s not stationary. Her dream is to have her own home on a small wine farm and the best wines it is possible to create.

She also sees teaching in her future. But it will be teaching with a practical focus involving wine. “We have in many instances 200 kids being enrolled for a school year and by the end of the school journey, there are only 100 left. I would like to get into the space of those who fall by the wayside. Teach them to be entrepreneurs and wine ambassadors.” The things that, with passion and initiative, she has taught herself.