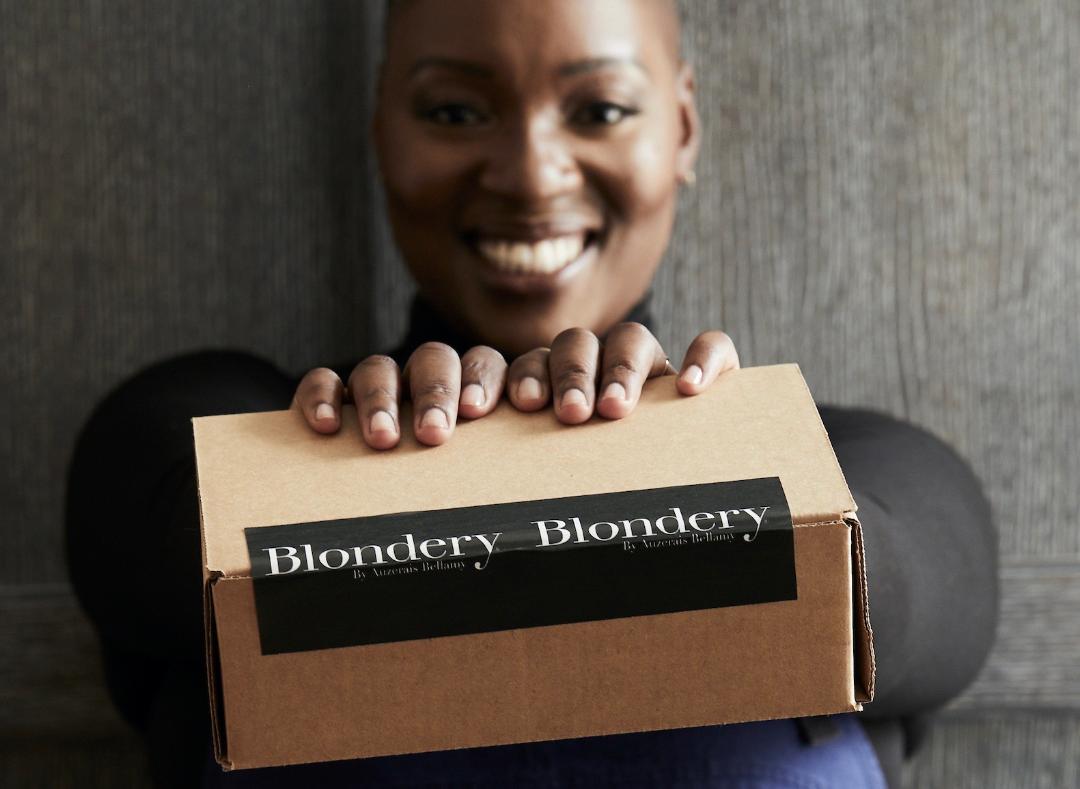 Auzerais Bellamy has been making her own path for many years working in Michelin starred restaurants as a pastry chef and perfecting her signature blondies recipe for over ten years. Now, she has a booming business, ​Blondery​, based in Brooklyn, New York, that not only features her famous blondies but other baked goods that she ships all over the country.

Born and raised in the Bay Area, Bellamy’s beautifully unique first name is the namesake of the avenue her father would drive on along his city transit route. Coming from a family full of women entrepreneurs and restauranteurs, her grandmother, eight aunts, uncle and uncle-in-law opened Everett & Jones Barbeque in 1973 in Oakland, California and still run and operate the popular location (and a few others) today.

Finding Her Own Path

While growing up in the restaurant, Bellamy never found herself wanting to participate in the barbeque business. Instead, she would find herself baking boxed cupcakes and other sweets for herself and family at gatherings as a child. Although she admits they weren't very tasty, she would keep practicing and feeding them to her family until she would get a recipe right.

“As I got older and explored more with my creativity. I started to add Jell-O pudding to the mix, use butter instead of oil, milk instead of water,” she says, realizing at around eight years old that she really loved baking. Her parents helped grow her passion by buying her cookbooks and challenging her to continue to use her creativity and when the prestigious culinary school Johnson and Wales came to her high school, Bellamy knew she was ready to turn her passion into her own career in food.

She heard of an opening at one of Thomas Keller’s highly acclaimed restaurants in Yountville, California. She had never been there before, but by the end of her stage at The French Laundry, she had secured a position in arguably one of the best establishments in the country, Bouchon Bakery. When a lateral position opened up to continue working under the Keller brand, she would find herself moving back east, but this time to New York City.

Like most Black folks and people of color in the food industry, Bellamy had hit a glass ceiling working in fine dining. She couldn’t seem to get past being a sous chef and wasn’t getting the same amount of nurturing and growth she would see with her white peers. As a Black woman in pastry, she especially was one of a kind.

At times, Bellamy was the only Black woman in the establishment and knew the system wasn’t going to play in her favor. Although she was more than qualified, she was passed over for positions often with no legitimate reasoning. So, she left working in restaurants and began working in administration, but again felt herself not living up to her true potential. This time she decided it was time to “get off the pot,” hone her craft and go into business for herself.

Over the years, Bellamy continued to work on her blondies (desserts that substitute vanilla for cocoa used in brownies), which were inspired by the pecan pralines she had growing up in church and making them for her family and friends. Bellamy says, “Before I moved, I was making the pecan and salted caramel blondies for my family and bringing to every holiday gathering. So, I narrowed in on this thing my family really liked and I started tweaking the recipe.”

In 2016, she figured it was time to create her own website to meet the demand she was getting from just shipping them back to the west coast. It was an immediate hit, getting her hundreds of orders that she wasn’t expecting. “I ended up getting over 500 orders and I had no boxes to fill the order, so I used these black Chinese takeout containers because I had to do it at the time”, she says. She was used to pivoting to make things work, so by the time the coronavirus pandemic began, she was mostly prepared.

From Demand to Growth

The holiday season was busy before the pandemic, but by Mother's Day, one of the busiest holidays in the food industry, she had to scramble to find the basic ingredients needed to fill her demand for orders. She would find herself walking through the city, getting whatever flour, baking leaveners and other ingredients from bodegas, friends and neighbors when major retailers began to run out. Not only was she able to keep her business afloat when so several others unfortunately crumbled, but she was also able to expand.

She elevated her social media platforms and photography skills, as well as expanded her menu. Bellamy even started a YouTube channel as a way to not only to show her skills, but to teach others, especially other marginalized people, who aren't able to receive the same resources to begin an online business or who just wanted to learn more about baking.

The growth of Blondery, even throughout a worldwide pandemic, has been astounding —Bellamy has almost 3,000 names on her waiting list for her products. She still does pop-ups and opens up her orders as long as you’re following along on her social media platforms and website.

Her growth in business means she also has the opportunity to expand one of her most important goals. “I’m looking forward to fulfilling the mission of the company of being able to hire more people who are notoriously marginalized within the food industry,” she says. “I’m really interested in getting a new space where I can really serve the community the most.”

Still based out of Brooklyn, she’s looking to move to a larger location outside of the city where she can expand her bakery and provide the job opportunities and mentorships she craved as a pastry chef working in predominantly white spaces. Destined by name to pave her own way in this world, she’s making sure she does that for her industry and community as well, one sweet treat at a time.

Make sure you check out chef Auzerais Bellamy on her website, ​www.blondery.com​ and her Instagram and Facebook pages where she will have a restock of products on 11/1, pop-ups throughout October and beyond and some new additions to her menu for the fall and holidays.

Amethyst Ganaway is a 10-year restaurant and food industry professional. The North Charleston native began her career in restaurants as a server and cashier and now includes various corporate and fine dining management positions. Her resume includes restaurant, editorial, brand recipe development and food writing. She has been published in Eater, Food and Wine, Plate Magazine, Serious Eats, The Post and Courier, The Spruce Eats, The New York Times and more.