Getting Into the Groove with Chef Roger Mooking 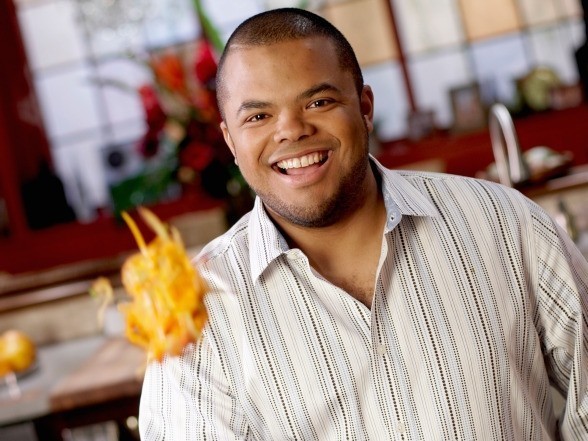 For chef Roger Mooking, host and co-creator of the Cooking Channel’s hit show “Everyday Exotic,” it is all about being in the right place at the right time.  Since May 2010, audiences in the United States have tuned in weekly to witness Mooking’s style of cooking which combines his love for food, teaching and music.

A native of Toronto, Canada, cooking has been in his family’s blood for three generations.  His grandfather owned and operated restaurants and his father, aunts and uncles followed suit.  Mooking wasn’t too far behind. “At three-years-old, my aunt asked me what I wanted to be and I said a chef. I just knew that was something I was compelled to do.”

The Road to His Own Show

Family gatherings in addition to his grandmother’s daily spreads continued to fuel his childhood proclamation.  He would eventually attend George Brown Culinary Management Program where he earned top honors and is now the chair of the Professional Advisory Committee.

RELATED: Robbie Montgomery Celebrates New Cookbook and Restaurant and Sixth Season on OWN

He went on to build an extensive and impressive career on the Canadian culinary scene working at restaurants as well as consulting on new restaurant projects.  All of this one day landed him in the right place to create his own TV show.  It was by chance that he ran a restaurant that was around the corner from Food Network Canada and unknowingly talked to some of the executives who came in to dine.   Once formal introductions were made, talks of having his own show followed and years later the rest is history.

“Everyday Exotic” was first introduced overseas more than two years ago prior to being picked up for the Cooking Channel in the U.S.  Foodies in the Caribbean, South East Asia, New Zealand and Poland were the first to be introduced to Mooking’s inviting personality and engaging way of taking what many may consider intimidating ingredients and showing how to turn them into everyday staples.  “The whole goal was to let me introduce you to it [ingredient] so you become as familiar with it as an apple. Good basic information about that ingredient so that you are no longer intimidated by it. Then you take it to the kitchen and learn how to cook it several different ways.  And you realize how dynamic that one ingredient is.”

A Man of Musical Talents

With more than 50 episodes filmed and under his belt as well as a demanding schedule, it is amazing how Mooking makes time for his other love, music.   The other half of his life is as a recording artist. He celebrated the release of his first album “Soul Food” in 2008 and notes that he is currently working on his sophomore project.  For Mooking, both food and music go hand in hand and it would be hard to envision one without the other.  During his career as an artist, he has won a Juno Award at Juno, Canada’s Music Awards. This year’s event in March will be hosted by hip hop star and Canadian Drake.  Mooking has also garnered three Much Music Awards.  “Soul Food” is sold in Canada and also available on iTunes.

A husband and father of two girls, downtime is rare and usually entails catching a movie. But you can tell that he doesn’t mind the juggling act between both careers and the family. After all, each provides inspiration for the other.

The year 2011 is already off to a busy start with an upcoming trip to Malaysia in January and Cambodia in February, a book project, event appearances and more he confirms. For Mooking, he wouldn’t have it any other way. “There is a world of food out there and that is what I love about the food world. In no one person’s lifetime will you learn everything there is to know about food.” This means we plan to see him for a long time sharing with others and also learning as he learns and being a part of his lifetime journey.

For more about Chef Roger Mooking, visit rogermooking.com. You can also find him on Twitter.