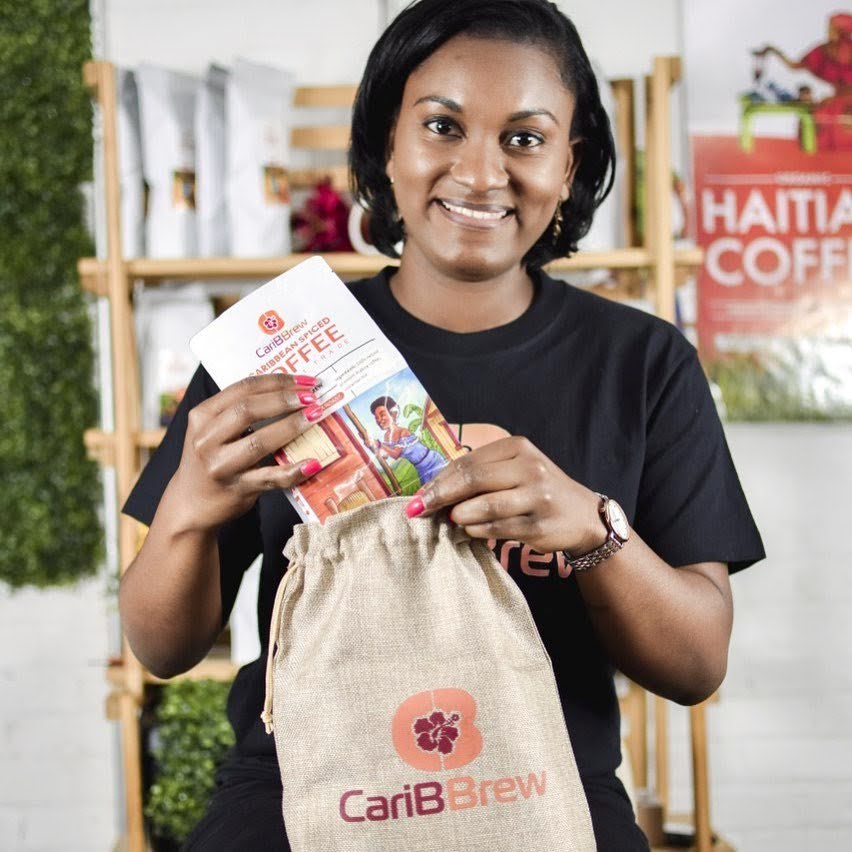 When Caribbrew’s founder and CEO Beverly Malbranche launched her New Jersey-based operation in 2018, she had the dual focus of reviving coffee production in her native of Haiti; once a major coffee-producing nation in the 1900s.  Malbranche also wanted to do it sustainably, ensuring she was giving back to her home country by treating farmers right, creating job opportunities in local communities and surrounding her brand with a do-good, feel-good sentiment from day one.

To achieve that, she works directly with farmers’ cooperatives in Haiti and has been slowly but surely adding to her small but select number of offerings, including dark and medium roast premium Arabica coffee, a hot/cold brew spiced coffee, hot chocolate and skincare products sold via her website, Amazon and a handful of local stores and soon, if all goes per her plans, at one major retailer by next year.

“It’s been good so far. We have been able to grow and have more customers discovering Haitian coffee,” Malbranche shares. “People are definitely coming from our website or following us on social media. It’s been a journey, lot of ups and downs but so far, so good.”

Caribbrew’s clientele started organically with traffic from local events and pop-ups all over New York. The website and social media have added to that, and recent advertising on Facebook and some concentrated public relations efforts have resulted in more people connecting with the brand. Malbranche is grateful for the business, considering she didn’t start out in the industry.

Coming to the United States as a 17-year-old international student for college, she pursued a career in financial services in the corporate world initially. It was her uncle’s avid coffee-drinking habit that introduced her to the charm of the beverage she had tried as a child but only began enjoying more as an adult.

One summer during school, she decided to sell the coffee her uncle had brought over from Haiti. Seeing that the product had quite a few takers, she established Caribbrew and has since grown the business to where last year saw her buying almost 17,000 pounds of coffee from Haitian farmers in the southeast, compared to a mere 5,000 her first year.

Malbranche works with local farmers’ cooperatives to ensure the quality of coffee beans and works with local small businesses in the country to get everything processed and packaged for shipping to the U.S. The co-ops are dedicated to preparing high-quality beans for export and usually represent 1000 to 5000 farmers on smaller family-owned land who grow coffee that is chemical-free and handpicked before being roasted in small batches.

The product is then shipped to customers nationally from the New Jersey warehouse, where she also does some roasting for local wholesale orders. Striking colors and images tell the story of this Haitian coffee brand, from a farmer in a traditional hat sipping on his cup of coffee to the women who play a role in the process, from pounding the coffee bean to preparing it for consumption.

“I wanted to display the culture and the people, so I worked with a Haitian artist to bring that to life and a graphic designer to put it in a packaging format. It really shows where it is coming from,” says Malbranche, who manages the business along with her two brothers––one handles operations and the other marketing. A family-owned business of sorts, Malbranche will be the first to admit the last year was a challenge to work through. “But we have all adapted and able to keep things going and growing.”

Malbranche always knew she wanted her efforts to have a positive social impact. Caribbrew achieves that first by providing farmers a competitive price per pound purchased of coffee beans, creating long-term economic development in the farming community. That has a domino effect—many of the farmers are women, so gender equality in the field is addressed.

There is also the secondary impact in areas where they live as people are employed for picking and sorting the beans and packaging and sanitizing the product for export, creating job opportunities in service and logistics. Job opportunities are also created in New Jersey, where Malbranche hires locals for inventory, online order fulfillment, social media, and other business-related efforts. The business also provides her the opportunity to educate and spread awareness of Haiti’s place in the coffee trade.

Haiti used to be a major coffee producer in the 1900s and is now making a comeback. Multiple reasons led to the nation losing its sheen in the global coffee industry, including years of dictatorship that came with trade embargoes on Haiti. Another was competing countries increasing their coffee production during that time, realizing the profitability of the crop. This resulted in other markets scaling while Haiti was failing.

As recently as late 2019, political unrest in Haiti affected Malbranche’s business when she was exhibiting at a New York coffee festival and her team couldn’t make it in time with the requisite inventory. But she finds a silver lining even then. “Customers are more curious about where our product is from and what social impact will benefit from it, so it’s a good time to be coming back though the coffee market is also very crowded.”

Steeping on to Success

During the pandemic, the shipping of products became a roadblock as only health-related items were being prioritized during one phase. But being honest with customers and communicating that this was just the situation while the pandemic was at its peak brought about some understanding.

Personal challenges have included finding financing even as her business was gaining traction, working on the business alongside her day job as it was getting started, and not being recognized as the Black female owner of the coffee company. “I don’t take it personally. It’s kind of the world we live in,” she says matter-of-factly. “But I do know that entrepreneurship is changing, and I am very happy there are more women and more Black women and especially foreign women…So far, I would say that I cannot complain about being a woman in business in this time because I’ve also been grateful for a lot of resources.”

Malbranche has been able to take advantage of experiences and fellowships aimed at women entrepreneurs and founders of underrepresented communities. “I would say to other founders, look out for not just cash grants but education opportunities to grow your business… It’s competitive when you apply but worth taking the time,” she adds.

“I will say there were challenges but also look at the opportunities that came from people being aware of the state of Black women in business, wanting to invest in us and helping us get to where we need to be.”