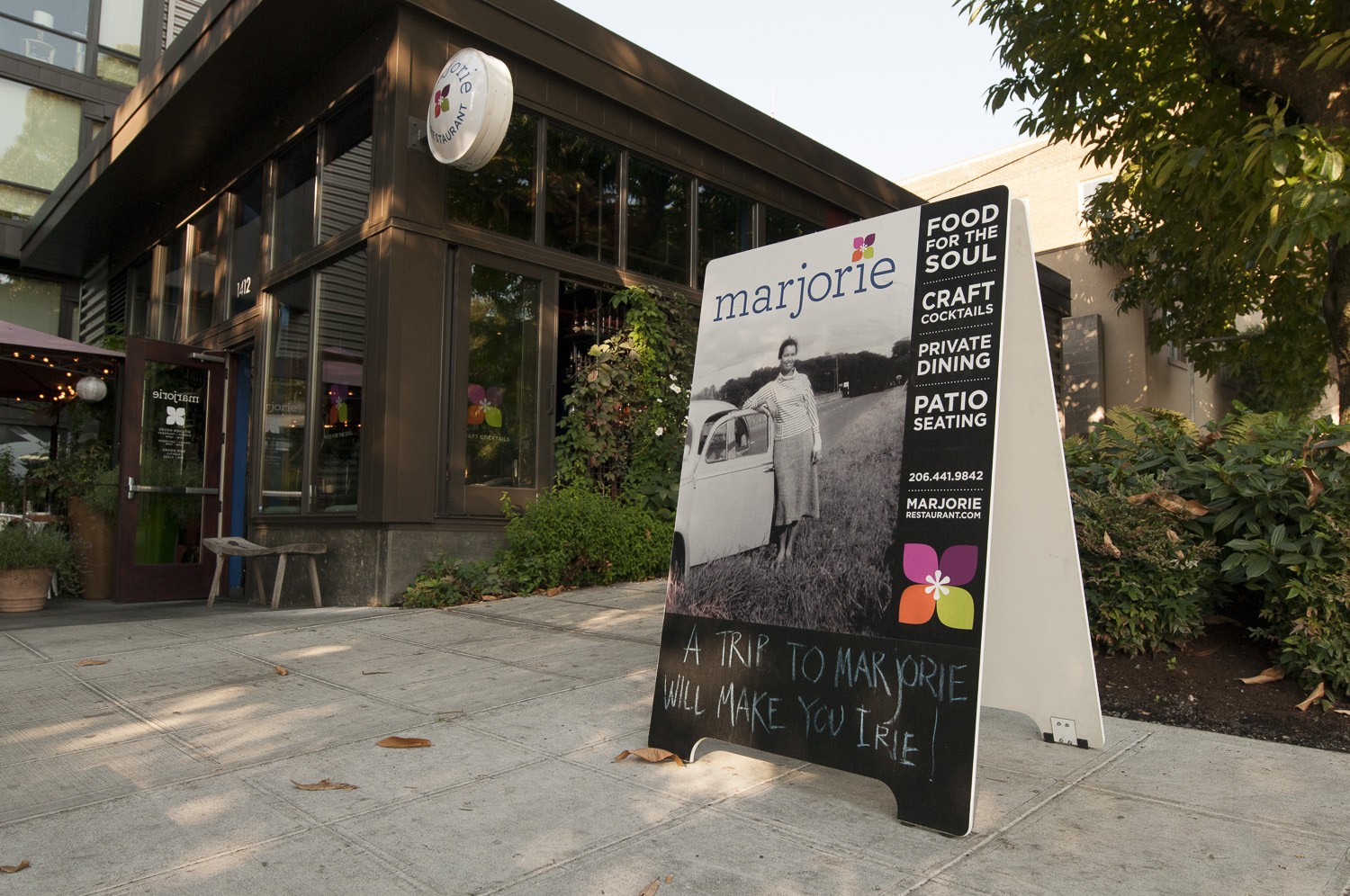 In the vibrant and diverse neighborhood of Capitol Hill in Seattle, Washington, Donna Moodie has created a bistro-style sanctuary for guests to enjoy at her intimate restaurant Marjorie.  Named after her mother, it is also the inspiration for Moodie’s interest in and affinity for the culinary world.

From chicken tikka masala to escargots de Bourgogne and wild Alaskan shrimp and grits, there is a splash of multiple cuisines to choose from on the menu while getting to know your neighbor hanging out at the bar at this cozy eatery.

“My employees are amazed at the kindness of our regulars, many come in and embrace us when they are leaving, and go to the kitchen to say thank you,” says Moodie, who has called Seattle home since 1993. Born in Jamaica and living in the United States since the age of five, a vacation to the city from her hometown of Chicago, Illinois found her falling in love with the food scene.

“Coming from the Midwest, a lot of things you’d have to go to a specialty store for was readily available in the market here. It blew me away,” she says. Though Moodie previously owned restaurants with a partner, she established Marjorie after they went their separate ways and has now had the restaurant for a good nine years, opting for a smaller space.

“It was a conscious decision to have a smaller space and the benefit is the restaurant doesn’t look empty on a cold weeknight in January,” says Moodie. “There is also no clear definition of roles. Chef Francisco Ruiz and I have really great rapport, so we plan the plates together. I always want him to be the creative force behind the food but respectful of the style in terms of the prototype that we set up and not straying too far from that in finding ways to express himself that he feels really good about.”

“The menu is definitely a little bit more intricate than I had originally envisioned but it’s the choice of the chef,” she shares. “I like the eclectic nature of it; it's the way I approach cooking. I wouldn't cook the same thing every day or from the same region. I was always drawn to a more global approach to cooking, as was my mom.”

The bestsellers are many. The plantain is a no brainer; people order it as they are being seated. The jerk chicken is a favorite to the point where even the chef agrees there is no way to take it off the list. Other dishes include handmade ricotta gnocchi and a vegetarian ceviche, which serves as a seasonal vehicle to use whatever vegetables are readily available.

For what appears to be a fast-casual neighborhood joint to an onlooker, Marjorie has some unexpected stars on offer. Escargot, venison and duck make appearances, though many would associate such ingredients with more of a fine dining experience. “We are always happy to try different things, the duck being a great example,” says Moodie. “We added that on and people really enjoyed it. They appreciate that one person can have a burger and another person can have venison.”

When the Past Inspires the Present

Maintaining a smaller restaurant is also a reflection of the social gatherings Moodie enjoyed when younger. “My mom cooked a lot at home, it was always from scratch and she was always inviting people over,” she shares. “She would get a Julia Child cookbook and nail the dish just by reading about it.”

At home, Moodie defaults to cooking whatever she is in the mood for, from tagine to chicken, dumplings or lamb chops. “I like eating that way, it's personally pleasing.” When in college, Moodie worked in a restaurant to pay for school and was amazed at the recreation of that social experience in a larger community setting. A part-time job after college to pay for a trip to Europe brought on the realization that working in nicer restaurants was a possibility.

“I started gravitating toward that kind of environment and came to terms with the fact it was my happy place,” says Moodie, who has certainly created a “happy place” for herself and her crew in her community spot, going by the dinner crowds that arrive around happy hour and stay well into the night.

She has made her famed plantains available for retail, as an extension of her business. Packaged as Miss Marjorie’s Steel Drum Plantains, they are sold online and in 200 stores nationwide.

That aside, Moodie is hoping to accomplish a few things on her bucket list. Upcoming travel plans include a trip to Jamaica with her son Max who helps out at the restaurant some days. “At some point, I will do a sabbatical to the book fair in Jaipur, India. I have a quirky interest in books, and may someday be doing a cookbook,” she shares. “I have my eyes on living in Italy for three months too for cooking courses and language immersion. I know it’s a long bucket list, I’ve always been an overachiever.”

Marjorie in Seattle is located at 1412 E Union St. Visit the restaurant online on www.marjorierestaurant.com or follow along on Instagram.