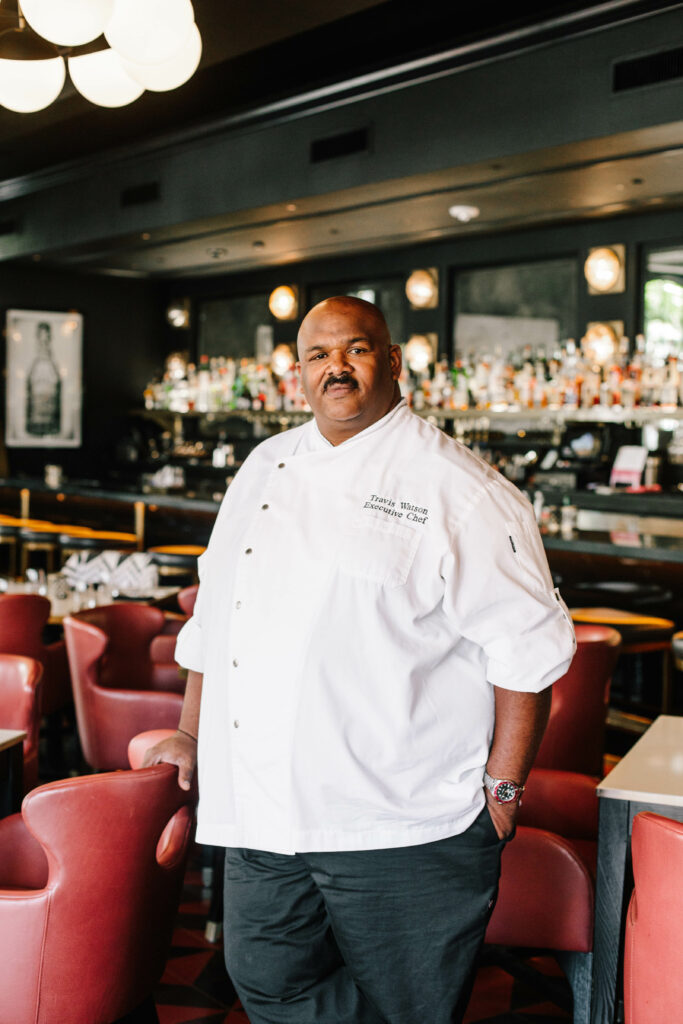 When nature’s bounty provides ample fodder, the sole recourse is exalting that beauty to its apex. For executive chef Travis Watson, that’s the mission helming the culinary program since last year at Santa Barbara’s five-star Hotel Californian.  Opening its doors in 2017, the hotel is affiliated with Preferred Hotels and Resorts, the world’s largest independent hotel brand. Nestled in the heart of the city, the property features Spanish architecture and Moorish vibes and dining options in the form of a signature restaurant, café and bar. The only Black executive chef in the city heading a culinary program for a hotel brand, Watson brings 34 years of experience, incorporating seasonal ingredients and flavors with a strong focus on sustainability, seafood offerings and organic, all-natural produce. The award-winning chef is also the host of “Tuesdays with Travis,” a weekly Instagram series offering live cooking demonstrations.

A Focus on the Planet and Sustainability

Having just completed a new episode of Tuesdays with Travis before our interview, he shares the success of what originally started as an effort to help in trying times. “During the pandemic, with restaurants closed and access to them limited, people are obviously cooking at home, so we started running these segments just to show how to utilize ingredients and use what you have in your pantry to make delicious meals. It was to give people some options and ideas about what they can produce at home and it’s taken off.”

This reception to his creativity and ideas is one of many aspects the chef enjoys about his new role at Hotel Californian. “I came here at a perfect time trying to transform us to being more sustainable and elevating every aspect of what we do.” He completely changed the banquet and outlet menus at the hotel to refocus on what sustainability should mean. “Making sure we leave the planet a better place and our footprint here is a positive one and as small as possible. I have receptive ownership, a receptive managing director who see the vision, know the importance of it and have supported me in that endeavor.”

Watson cannot narrow down an aha moment to credit for his focus on sustainability. He simply doesn’t remember a time that it wasn’t. “The more you learn, you see the effects that we are having as a species on our planet. Some of the biggest detriments that happen is in how we eat, what and how we farm, and how we take from our planet. Chefs can play a major role in reversing that, we are major purveyors of natural goods from our planet.”

An alumnus of the Scottsdale Culinary Institute and with degrees in political science and sociology from the University of Arizona, thanks to academic and football scholarships, the chef’s love affair with the kitchen began at 14 – his first job was washing dishes – offered up by his football coach at the time who was the executive chef at a restaurant. “The energy within a kitchen is like nothing else in the world, I loved it and have been in the kitchen since then,” he shares.

Watson’s career, mostly sprinkled with highlights, by his own admission, spans the globe. He has worked in Africa, Japan and Europe, including an apprenticeship under chef Georges Paccard in Paris. His experience in Africa was in Mozambique’s capital of Maputo, where he was for a little over a year. When in college, early in his career, he benefitted from summer externships that allowed him to be immersed in many societies and cultures and a chance to work with unfamiliar ingredients and techniques.

Watson was previously the executive chef at the famed Rancho Bernardo Inn and Spa in San Diego before landing his current opportunity at the urban luxury resort property in the heart of the American Riviera. “This gave me a chance to elevate food and focus on sustainability, it was an opportunity I just couldn’t pass up,” he says. One of his favorite places at Hotel Californian is the Serena Rooftop Deck, where outdoor events are held, surrounded by views of the ocean and mountains. “It’s a brand new hotel designed impeccably. Some of the design features here are like nothing I’ve ever seen before,” he shares about the location featuring interiors by multi-award-winning celebrity designer Martyn Lawrence Bullard.

Taking his focus on sustainability further, Watson is eyeing classes to teach the public about what they can do to participate, how to pick sustainable produce and how to prepare a sustainable meal. “Also, making sure we are always sharpening our knives, putting ourselves on the culinary map and pushing the team to be on the cutting edge of what’s going on,” he says.

In terms of culinary trends, he adds, “Sustainability is not going anywhere, other trends are safer farming practices, small-batch farming and extremely localized farming to the point where you’ll see all your produce coming from a 10-mile radius from where you are at.” It demands seasonality and that local small producers get credit in being financially viable in the market rendering the bigger farmers with less sustainable farming practices obsolete.

From his vantage point, his wisdom for young chefs entering the hospitability sector or as kitchen staff in the next few months is practical, “Be the hardest worker there. Ask a million questions to ensure you get the right information and you are doing exactly what you are supposed to do. One thing you can control is your attitude, so have a good attitude every day. With a good work ethic and attitude, this will be the best job you’ve ever had.”