Tales of Cocktails with Duane Sylvestre 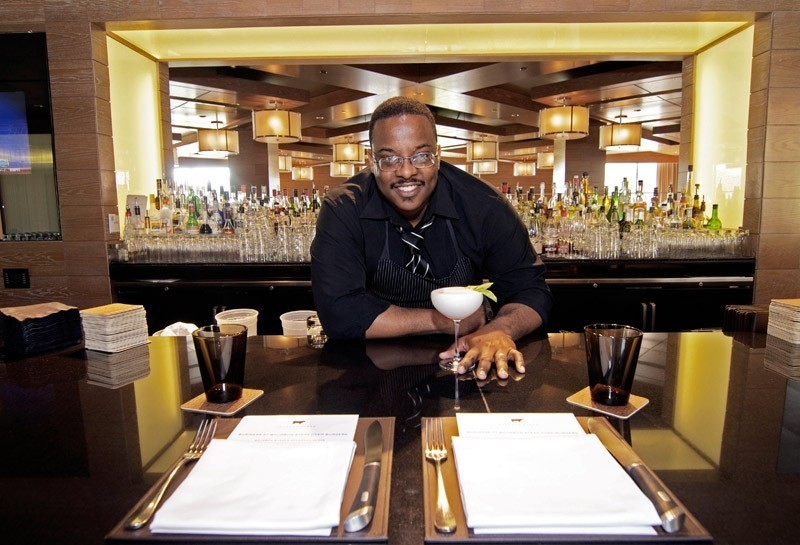 “I mean I have been bartending since I was two,” is the first thing one of D.C.’s most esteemed bartenders, Duane Sylvestre, tells me as we open the conversation.  Of course I had to laugh and from that moment on I knew I was in for a good time, even without being at THE BOURBON STEAK located inside the Four Seasons Hotel where Sylvestre has entertained guests since 2008.

All jokes aside, the Trinidadian-American was referring to growing up and watching his aunt take care of anyone who was in her company “with a lot or with nothing.”  “What I tell people is that I have been doing this for a long time,” says Sylvestre who professionally started behind the bar in 1997. “When I got into it, it was all about the interaction. No matter who sits down at your bar, from whatever walk of life they come from, your ego is actually their company.”

A graduate from ABC Bartending School in Florida, he returned to D.C. to work for a variety of establishments such as T.G.I.F Friday’s, Crossroads (a West-Indian nightclub) and Jasper’s Restaurant.  Prior to joining the Mina Group (owned by famed chef Michael Minna), Sylvestre spent two years at McCormick & Schmick’s where he quickly climbed up the ladder by becoming a head bartender in just four months and later getting into management.  He was rewarded for his talent and the company played a big role in his growth and development in the industry both personally and professionally.  Sylvestre would also achieve his sommelier status here as well.

RELATED: An Evening of Film, Wine & Music with Spike Lee

Looking for more of a work-life balance, he heard of an open bartending position at Minna’s restaurant. “I knew about the Four Seasons. I didn’t know who Michael Minna was.”  Eight interviews later, he settled in his current role and still loving every minute of it. At BOURBON STEAK, it is all about using fresh ingredients and making the best of what you offer on the menu.  “I learned and embraced do it right, the best way that you can each time. Even if it takes a little extra time to put it out there.  Make sure anything you are putting out there represents yourself. “

I think we all have asked that moment when we thought tossing bottles in the air and mixing cocktails on the side of our face like we are playing the maracas was fun and to those watching a little sexy.  Everyone gets into it for their own reasons and likes different aspects of it. “What do I like about bartending?  I tell people it is not really bartending that I like, I love teaching and entertaining and the bar is the stage that provides an opportunity for me.”

Sylvestre’s creative concoctions have garnered numerous accolades and awards, winning various competitions around the country.  In addition, he is an active member of the DC Craft Bartenders Guild and the Masters Guild of Sommeliers. The bar itself has been named one of the top 75 bars in the city and has been nominated two years in a row for the Hottest Bar Scene of the Year.

The History of the Cocktail

This past April, Sylvestre and other fellow Black bartenders in D.C. got together to pay tribute to the contributions of Blacks during the Prohibition era. The truth is that we do have a strong history around this time and many Blacks were impacted professionally by this ban.  One of which was Tom Bullock, a highly-regarded bartender at the St. Louis Country Club, who is credited as being the first African-American to write a cocktail recipe book that was published in 1917.  “The Ideal Bartender,” is a historic and authentic look at bartending during his time with more than 150 cocktails. There is talk, Sylvestre says, about building an organization where Black bartenders/mixologists can come together to share history, experiences, and resources.

So what is on the menu this fall?

“In the fall, people are going to run to the darker spirits.  You’ll see more of the spices come in.  People are going to try to get something with parsnips and pumpkins and things that like. We’ll do cinnamon here; you know we just get a little more serious with our cocktails.  You’ll see the warmer things start to creep in. It’s a fun time. Fall is the most exciting time for drinks.”

As for what Sylvestre plans to do next, he knows he has a good thing going at BOURBON STEAK, but also wants to continue growing in whatever direction the future may take him.  In the meantime, don’t miss out and head over to the bar to check him out for some great conversation, pieces of history, lots of laughs and of course an unforgettable cocktail.

BOURBON STEAK is located inside the Washington D.C. Four Seasons Hotel at 2800 Pennsylvania Avenue.  To make a reservation, call 202.944.2026.