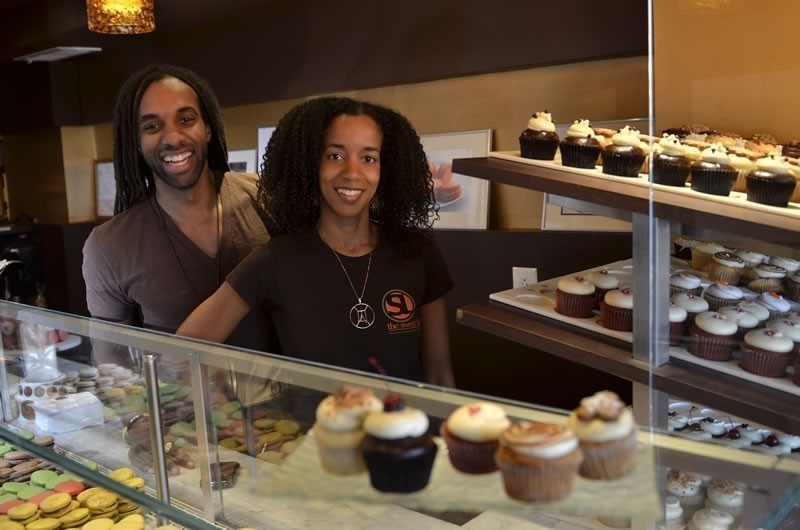 A sign near the entrance declares, “You Don’t Have to Choose!” What a relief it is for customers at The Sweet Lobby who are trying to decide which tasty treat to buy.

“Boston Cream is my favorite. The Sweet Potato Marshmallow is good and the Red Hot Chili Chocolate macarons,” says Joyce Moreland, a weekly visitor to the boutique bakery in Washington, D.C.

Moreland’s son is also hooked. He pulled up to The Sweet Lobby minutes after his mother departed. He left with a box of six cupcakes for himself and his co-workers.

“I had to try different ones. I didn’t know which ones I like. I definitely had to get the Boston Cream and try some of the newer ones,” says Moreland, a D.C. resident who lives close to his mother and the bakery.

War of the Cupcakes

The petite space, resembling a European hotel lobby, boasts a dazzling display of colorful French macarons, elegant cupcakes, unique cookies and exotic teas. It is the creation of two MIT engineers, Winnette McIntosh Ambrose and Timothy McIntosh.  The sister-brother team baked their way to first place and a $10,000 prize on the Food Network’s “Cupcake Wars.” They achieved that culinary victory about eight weeks after opening the doors of The Sweet Lobby on Capitol Hill.

RELATED: Good Girls Go to Paris: Where Crepe Lovers Stop for a French Moment in Detroit

RELATED: Catching Up With the Capitol’s Chief of Desserts Padua Player

“I think it’s just tremendous validation. We took a risk and decided to take on a career I wasn’t necessarily trained for. I’m sort of very much self-taught. I haven’t taken a baking or cooking class in my life. That certainly was risky,” says Winnette, the shop’s 37-year-old owner, executive pastry chef and creative director.

Risky indeed considering Winnette and her husband, Ricardo Ambrose, put their life savings into launching the business in June of last year. Her brother made his own leap of faith when he urged her to audition for the Food Network reality show. Timothy only had time for a few cupcake practice sessions before he and his sister competed against three other teams.

“We had done individual accomplishments on our own, but it was the first time we were in a situation where we both produced together,” says Timothy, The Sweet Lobby’s co-founder and general manager. “We showed each other and everyone what we could do together. That meant a lot, definitely.”

From Science to the Science of Baking

Years before they conquered “Cupcake Wars,” Winnette and Timothy mastered academic achievement. Growing up in Trinidad and Tobago, the sister and brother pursued the sciences with a passion, laying the groundwork for their admission to the Massachusetts Institute of Technology (MIT) on scholarships. They both credit their “amazing” parents for nurturing a firm belief in possibilities.

“Even though we had limited funds, I never felt that there was a limit to what I could do. Our parents fostered the sense that you really could do anything you wanted,” says Winnette, who had a double major at MIT and earned degrees in chemical engineering and French language and literature.

Timothy also has “a good feeling” about the support their parents gave them along with the freedom to explore their interests in sciences, languages and the arts.

“I think it is something that definitely extends throughout our lives. In our minds, we feel free to dip into any particular territory that we want and we feel comfortable doing it,” says Timothy.

Comfortable, confident and fearless, the two siblings have combined those characteristics into a formidable formula for pursuing their ambitions. As a biochemical engineer with a Ph.D. from Johns Hopkins University, Winnette works full-time at the National Institutes of Health.

When not in the science lab at NIH, she spends hours baking and frosting The Sweet Lobby’s desserts, inventing and testing recipes and creating concepts and product names. The husband she met at MIT was a computer science major and another person who makes her demanding life manageable.

“Ricardo is phenomenal. He is my greatest strength. He is amazing in all that he does behind the scenes to keep this engine turning. He is like my solid rock of support,” says Winnette.

Her 27-year-old brother and the 16-member staff he oversees make up the rest of The Sweet Lobby team. Together, they juggled a major expansion after publicity from “Cupcake Wars” significantly boosted sales. Two of the winning cupcakes, the Fire Breathing Dragon Chocolate and Green Tea-Pistachio Lantern, are still big sellers.

The brother-sister team might not be champions if it were not for the perfect blend of his pragmatism and her perfectionism. They ran out of time while trying to finish the decorations during the second round of “Cupcake Wars.” Timothy saved the day by remembering the edible chopsticks Winnette had made out of sesame seeds.

“He just grabbed the chopsticks and threw them on the unfinished cupcakes, which is not something I would ever choose to do. As far as I’m concerned, it has to be finished and perfect,” Winnette adds with a laugh.

Episode 2 in Season 4 of “Cupcake Wars” aired on Super Bowl Sunday in February. Family and friends are not the only ones who cheered when Winnette and Timothy claimed the title with a 1,000 cupcake display for a Chinese New Year celebration in Los Angeles. A 14-year-old baker saw the show and knew exactly where she wanted her family to go on a July visit to the nation’s capital.

“When I saw their little shop come up, I thought, ‘Oh, that would be a fun place to go on our trip,’” says Sophie Powers, who lives in Norman, Okla. She departed with a Smores cupcake and a snapshot with Winnette.

The Sweet Lobby’s owner and her brother are confident their global perspective and tactical experience will help them attract more fans to the new bakery locations they plan to open in the District of Columbia. By then, the list of such exotic flavors such as the strawberry Champagne cupcake and caramelized pear goat cheese macaroon will most likely exceed 50.

In fact, the sister and brother are already working on another vision for expanding the availability of the handcrafted macarons, cupcakes, Madeleines, éclairs and other treats.  Later this year, Winnette and Timothy will begin shipping The Sweet Lobby’s creations to customers around the country and possibly the world, another choice they are pursuing with the assurance of proven winners.